SwRI mechanical and automotive engineers have provided integral technical services and mentorship at Shell Eco-marathon (SEM) events in the Americas, Europe, and Asia.

SEM events challenge student teams from around the world in three venues to design, build, test, and drive ultra-energy-efficient vehicles. The competition is based on a simple idea: which car can cover a set distance on a test track using the least amount of fuel. SwRI has supported SEM events for the past six years as a Global Partner  in Innovation. 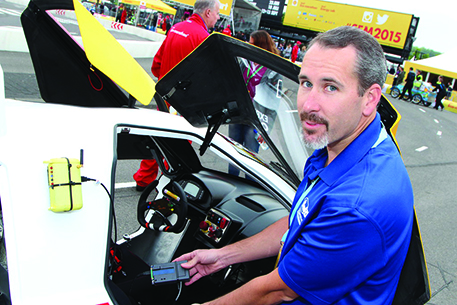 SwRI also sponsors the Technical Innovation Awards at each of the events. Team Tatonkatoo from the University of Colorado Boulder won the award at SEM Americas; Team Nanyang E-Drive from Nanyang Technological University in Singapore won SEM Asia; and Team Prometheus from the National Technical University of Athens, Greece, won at SEM Europe. Each team received a $2,000 prize. SwRI also sponsored a scholarship awarded at SEM Americas. Huy Nguyen, a freshman mechanical engineering student at California Polytechnic State University, was chosen from nearly 50 applicants to receive the $2,000 scholarship.

SwRI automotive engineers also helped develop the Drivers’ World Championship (DWC) concept, a new component at this year’s Europe event. The winning Urban Concept vehicles from the Asia and Americas events joined winning teams from Europe in a 24-lap race to determine the fastest and most energy-efficient vehicle.

The goal was to cross the finish line first while only consuming a certain amount of fuel. Race officials monitored fuel usage in real time through a system spearheaded by SwRI’s Mark Walls.

The technology allowed SEM to acquire live, instantaneous  measurements of liquid fuels in-vehicle. It also provided an onboard transponder that cut the energy source when the vehicle had consumed the allotted amount of fuel.

“My role in particular was to bring in the real-time precise fuel measurement,” Walls said. “We assigned each team a fuel energy amount, and they had to complete the race in normal race fashion (first across the finish line) without running out of fuel. Once they hit their assigned energy amount, we shut them down remotely.”

Each vehicle was provided a certain percentage of fuel above their best officia regular SEM event result. “This additional amount allowed them to go a little faster than they could during the regular EM event,” Walls said. “But they could only go so much faster or else they’d run out of energy before making the required number of laps. So driving strategy can become a very important factor.”