In addition to collecting stunning images and science in the Pluto system, NASA’s New Horizons spacecraft also measured properties of the solar wind in the outer solar system. Measuring how the wind evolves as it travels billions of miles from the Sun, scientists made breakthrough discoveries about how solar wind interacts with Pluto’s tenuous atmosphere after traveling billions of miles from the Sun.

SwRI operates the Solar Wind Around Pluto (SWAP) instrument, which measures the flow of charged particles emitted by the Sun. Data show that the tumultuous flow of solar particles calms and becomes more uniform by the time it reaches Pluto’s orbit. In the inner solar system, the solar wind is more variable and consists of a mixture of episodic eruptive solar events and regular fast and slow wind streams that interact with one another. 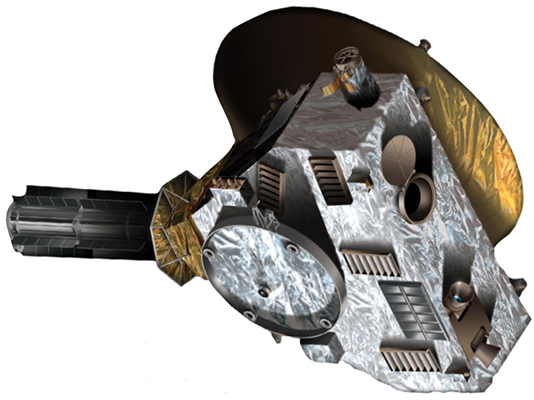 “Differences in speed and density average together as the solar wind moves out,” said SwRI’s Dr. Heather Elliott, a member of the SWAP team. “But the wind is still being heated as it travels and faster wind runs into slower wind, so you see evidence of the Sun’s rotation pattern in the temperatures even in the outer solar system.”

“SWAP cannot make detailed composition measurements,” Elliott said. “However, the instrument responds differently to light ions like those in the solar wind than it does to heavier ions. We were able to use this difference to distinguish between the light solar wind ions and heavy ions originating in Pluto’s atmosphere.”

As the solar wind flows around objects in the solar system, it pushes on the Sun-facing side and pulls the opposite regions into an elongated tail structure.  After closest approach, New Horizons traveled through Pluto’s tail as it left the system. SWAP found that the tail region was dominated by heavy Plutogenic ions and surrounded by a sheath of solar wind ions.

As the New Horizons spacecraft passed beyond Pluto, it traversed a tail of heavy ions emanating from the icy planet. The SWAP instrument measured a population of heavy Plutogenic ions (in red) sheathed in lighter ions associated with the solar wind (in blue).

SWAP also measures how neutral interstellar material becomes ionized and is “picked up” by the solar wind. These interstellar pickup ions can have up to twice the speed and four times the energy of the solar wind.  Farther out in space, these ions may be the seeds of extremely fast energetic particles. Known as anomalous cosmic rays, these phenomena pose a radiation threat to astronauts closer to Earth. These ions also play an important role in shaping the boundary where the solar wind hits interstellar space.