After a 5-year journey, NASA’s Juno spacecraft has arrived at Jupiter, the largest planet in our solar system. The spacecraft entered a novel polar orbit around the gas giant on July 4. From this vantage point, Juno is poised to improve our understanding of Jupiter’s formation and, in turn, the processes that led to formation of our solar system.

“NASA’s done it again,” said SwRI’s Dr. Scott Bolton at the post orbit insertion NASA press briefing. Bolton (shown third from left below) is an associate vice president in SwRI’s Space Science and Engineering Division and serves as the principal investigator for the Juno mission. “This is the one time I don’t mind being stuck in a windowless room on the night of the 4th of July.  The mission team did great. The spacecraft did great. We’re in orbit. We conquered Jupiter.”

On its journey to Jupiter, Juno became both the most distant solar-powered and the fastest spacecraft in history. To achieve orbit, the spacecraft turned and executed a 35-minute main engine burn to slow down enough to be captured by the gas giant. Soon after the burn, Juno turned once again to point the 18,698 individual solar cells that power the spacecraft back at the Sun. When a simple series of tones signaled Juno’s success, the team in the mission control room at the Jet Propulsion Laboratory in Pasadena, Calif., erupted into cheers, applause, high-fives, and hugs.

“Tonight, through tones, Juno sang to us, and it was a song of perfection. The spacecraft worked perfectly, which is always nice when you’re driving a vehicle with 1.7 million miles on the odometer,” said Rick Nybakken, Juno project manager from JPL.
“We hit our burn targets within one second, on a target that was just tens of kilometers large. Isn’t that incredible?”

And now the incredible science begins. “Our science collection phase begins in November, but we are collecting data a lot earlier than that,” said Bolton, “which, when you’re talking about the single biggest planetary body in the solar system, is a really good thing. There is a lot to see and do here.” 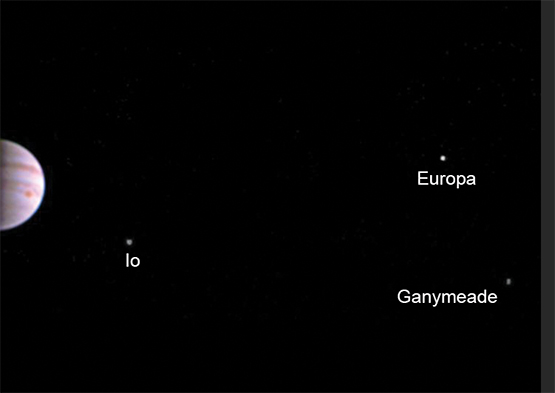 Just before orbit insertion, JunoCam relayed back to Earth images shot during approach. In this image, you can see Jupiter’s giant red spot and three of the  four largest moons. The Juno team put together a unique time-lapse movie  of these Galilean satellites in motion about Jupiter, available at: https://youtu.be/XpsQimYhNkA 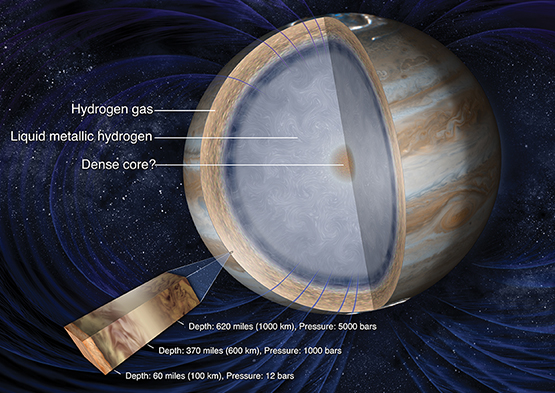 Juno has the technology to measure, for the first time, the atmosphere below Jupiter’s cloudy façade. Instruments will map variations in composition, temperature, cloud opacity, and dynamics to depths greater than 100 bars at all latitudes.

The Juno spacecraft is designed to unmask the mysteries that lie beneath the swirling clouds on Jupiter’s visible facade. Over the course of the mission, Juno will orbit Jupiter 37 times. With a suite of nine instruments, scientists will look at the internal composition of Jupiter to determine how deep the colorful surface features persist, mapping the atmosphere’s composition, temperature, clouds, and patterns of movement to unprecedented depths. Juno will measure the amount of water and ammonia in Jupiter’s atmosphere and help determine if the planet has a core of heavy elements, constraining models on the origin of this giant planet and thereby the solar system.

The Juno mission is the second planetary mission flown as part of NASA’s New Frontiers Program. NASA’s Jet Propulsion Lab manages the Juno mission for the principal investigator.  Lockheed Martin of Denver built the spacecraft. The Italian Space Agency contributed an infrared spectrometer instrument and a portion of the radio science experiment. 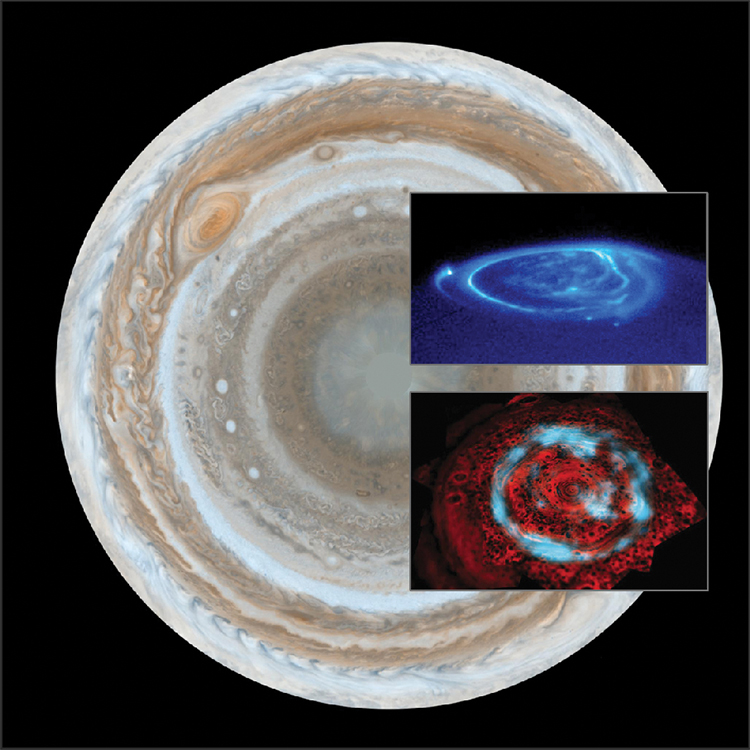 The SwRI-built UVS and JADE instruments are designed to characterize and explore the three-dimensional structure of Jupiter’s polar magnetosphere and auroras.