The search for life beyond Earth in our own solar system, much less elsewhere throughout the galaxy, has intrigued scientists for decades. However, processes that we would recognize as indicating life are difficult to detect. For one thing, those signs are subtle. For a spacecraft to sniff out the telltale chemicals that predict a habitable planet or moon while flying past at an altitude of hundreds or even thousands of miles, its sensors must be exceedingly sensitive. In fact, launching a suite of remote-sensing instruments capable of accurately measuring life’s necessary components has been technically impossible. Until now. 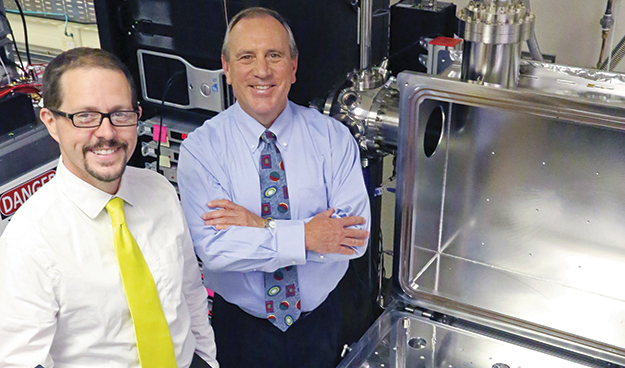 J. Hunter Waite, Ph.D., principal investigator of the MAss Spectrometer for Planetary EXploration (MASPEX), is a program director in the Space Science and Engineering Division. J. Hunter Waite, Ph.D., specializes in mass spectrometry applications to study solar system evolution and astrobiology. He is the principal investigator for two spectrometers on the Cassini mission to Saturn and is co-investigator of the Rosetta Orbiter Spectrometer for Ion and Neutral Analysis instrument investigating comet 67-P.

Two instruments designed and developed by scientists at Southwest Research Institute (SwRI) have been chosen to fly aboard a future NASA spacecraft that will explore Europa, the smallest of Jupiter’s four Galilean moons. Europa is about the same size as Earth’s Moon and is considered a leading candidate to possibly host life in our solar system. The multi-flyby mission, scheduled to launch in the 2020s, will provide a diversity of data certain to enrich our understanding of the potential habitability of this intriguing ocean world.

Instruments to work in tandem

SwRI’s MAss Spectrometer for Planetary EXploration (MASPEX) and the Ultraviolet Spectrograph (UVS) are among nine science instruments selected for the as-yet-unnamed spacecraft. The two SwRI-designed instruments will work in tandem to search for certain chemical compounds in Europa’s atmosphere and then sample them to sniff out signs to determine if the icy moon could host life.

In our solar system, Europa has been considered one of the most promising portals for life since the 1990s-era Galileo mission to Jupiter discovered evidence of a liquid saltwater ocean beneath its icy crust. If an ocean truly exists there, Europa could contain twice the water of Earth. Prospects for Europan life grew even more promising after subsequent data gathered by the Hubble Space Telescope revealed evidence for plumes of water vapors emanating from the surface. These geysers, if confirmed, would provide a means to study potential subsurface water environments connected to the surface by cryo-volcanic activity.

An artist’s concept shows how a plume of water vapor ejected from the icy surface of the Jovian moon Europa might look. SwRI’s ultraviolet spectrograph will remotely search for and sense such plumes, and MASPEX will determine the detailed composition of plume gases as the spaceship flies through them.

During the proposed spacecraft’s multiple flybys of Europa, the UVS instrument will measure ultraviolet light emissions to determine the chemistry and composition of the moon’s atmosphere as well as its source, structure, and variability. Examining the atmosphere from equator to pole, UVS will search for plumes spewing from surface cracks looking for clues about the nature of subsurface water reservoirs. UVS data will help scientists characterize potential plumes, along with its global atmosphere, in terms of distribution, structure, composition, and variability. It will examine the composition of Europa’s surface using reflected UV sunlight to help understand the reddish brown colorations of linea features (stripes) that are ubiquitous on Europa. These data may also provide clues to the composition of a subsurface ocean. Finally, it will investigate how energy and mass flow in the Europan atmosphere and interact with Jupiter’s strong magnetic field to affect the broader Jupiter system.

If plumes are confirmed on Europa and pinpointed by UVS, the spacecraft will fly through them allowing MASPEX to sample the volatile atmospheric gases and measure the composition. Measuring the molecular and isotopic composition will offer insights into the oxidation state and pH of the moon’s subsurface ocean, as well as any potential metabolic energy sources. By a large margin, MASPEX has the highest sensitivity and highest mass resolution of any mass spectrometer ever flown in space to sample, identify, and measure gases. Its precise measurements will reveal whether the conditions for life — liquid water, certain chemical building blocks, and an energy source — exist beneath Europa’s icy surface.

As the first blow in the one-two punch to characterize the atmosphere of Europa, UVS will examine the composition from a distance. This UV spectrograph is the type of tool astronomers use to split light into its various colors. By examining their light spectrum, scientists can then identify the chemical composition of gases based on the quantized energy levels of atoms and molecules.

Europa-UVS is the sixth in a series of SwRI-developed UV spectrographs, based on earlier instruments from the UVS/Alice “family.” Earlier iterations are aboard the European Space Agency’s (ESA) Rosetta comet mission, NASA’s New Horizons mission that flew past Pluto in the heart of the Kuiper Belt this summer, the Lunar Reconnaissance Orbiter mission in orbit around the Moon, and the Juno mission now on its way to Jupiter. Another example of this newest UVS version will be part of the ESA’s future JUpiter ICy moons Explorer (JUICE) mission, which will get close-up flyby views of Europa as well as Callisto, although its primary target is Ganymede. These two latter missions will likely overlap, so having two UVS instruments making measurements in the Jupiter system at roughly the same time will offer exciting complementary science possibilities.

The Europa-UVS will observe photons in the 55-210 nanometer (nm) wavelength range, at moderate spectral and spatial resolution. It has three apertures of different sizes, each of which can send light to a telescope mirror feeding the spectrograph.

The main entrance, or “airglow” port, is used for most observations, such as airglow, aurora, and surface mapping. The airglow port also allows stellar occultation measurements when Europa passes in front of a star and blocks its light. Scientists can study the thickness and composition of the object’s atmosphere by analyzing the absorption of light from the star as it passes behind the object and emerges on the other side. Similar light absorption analyses will be studied when Europa transits in front of Jupiter, when its atmosphere can be viewed in silhouette. The “high-spatial-resolution port” is a small aperture in a separate door used for detailed observations of brighter targets such as surface features. A third aperture, called the “solar port,” provides offset views of solar occultations, where again, light absorption by different molecules in the atmosphere and/or plumes is well measured (with the bright sunlight enabling high data quality).

Like its counterparts on the Juno and JUICE missions, Europa-UVS must be ruggedized to withstand the harsh radiation environment in the Jupiter system. To protect the instrument’s electronic parts, UVS uses shielding and radiation-hardened parts. To protect the quality of its data, UVS filters signal pulse-height amplitudes and manages its high-voltage settings. The UVS instrument team includes scientists from SwRI, Johns Hopkins University, the Royal Institute of Technology in Sweden, and the University of Cologne in Germany.

Europa-UVS conducts observations of different types starting from a large distance away from Europa. Image quality improves with proximity as shown, enabling great views of auroral features and potential plumes.

MASPEX will provide the second scientific punch, precisely sampling the ambient Europan atmosphere to understand the complex interactions among the moon’s interior, surface, and atmosphere. A particularly tantalizing aspect of the MASPEX experiments is the possibility of flying through and sampling material released from plumes and surface cracks. Scientists can use these measurements to infer the composition of Europa’s interior, and by extension, its presumed internal ocean. The concentration ratios of common volatiles such as carbon dioxide, carbon monoxide, water, nitrogen, hydrogen, methane, and simple organic compounds provide hints about habitability. If fractures allow liquid water to escape into space, some kind of heating process is likely occurring beneath the icy surface.

MASPEX will analyze the pH and oxidation states of any plumes. In this case, scientists are specifically looking for similarities to deep sea vents on Earth, where life on our planet may have first formed. These hydrothermal vents in sea floors serve as hothouses for marine life that thrive in the dark with just the energy the vents provide. 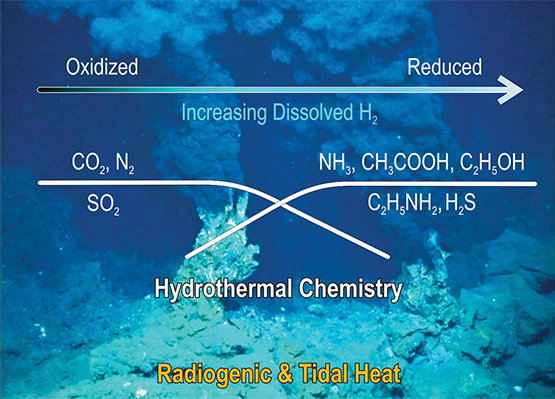 Typical hydrothermal systems on Earth operating at moderate temperatures favor the synthesis of organic compounds. Evidence that Europa might have a liquid saltwater ocean under an icy crust was first observed during the Galileo mission to Jupiter in the 1990s. The MASPEX molecular and isotopic composition study will offer insights into the oxidation state of the subsurface ocean and potential metabolic energy sources. Those precise measurements will reveal whether the conditions for life exist beneath Europa’s icy surface.

SwRI scientists and engineers developed MASPEX through a combination of internal SwRI and NASA funding to create a time-of-flight mass spectrometer with a resolution, sensitivity, and dynamic range unparalleled in spacecraft-borne instruments of this type. MASPEX uses a beam of electrons to bombard incoming gas molecules, converting them to ions, which are then extracted into the electrostatic field of the instrument’s optics for analysis. The sample to be analyzed will consist of a mixture of different chemical compounds, many with similar molecular masses. A time-of-flight mass spectrometer separates these molecules by speed to determine their composition because lighter ions travel faster than others. The longer the flight path the ions must cover, the more their different velocities will separate them and the greater the instrument’s resolution.

MASPEX uses novel “folded-ion optics” that provide a variable length flight path for the ions within a compact instrument. To do this, SwRI scientists installed paired electronic devices called reflectrons, which create an electrostatic field that acts like a U-shaped roller coaster. The reflectron effectively makes incoming ions run “uphill” against an increasingly strong field until they become stationary, and then slide back “downhill,” regaining their original energy but traveling in the opposite direction. Two opposing reflectrons enable the ions to be “bounced” back and forth until the desired flight path has been reached, then one of the mirrors is shut off and the ions travel to the detector. Flight paths of more than 50 meters are readily achievable, even though MASPEX is less than a half-meter long.

MASPEX also has excellent sensitivity due to an ion source that stores 200,000 ions every half-millisecond before the ions are released into the ion optical path. Even with its great sensitivity, however, MASPEX has difficulty collecting enough gas to see the rarest molecules. For that, SwRI engineers incorporated a cryotrap into the instrument. This device freezes and concentrates gas samples, boosting the instrument’s sensitivity by a factor of 10,000. On every flyby, MASPEX will both directly sample the atmosphere and concentrate a sample of the atmosphere, using a frigid surface to trap the gas. After the flyby, this cryotrap releases the sample into MASPEX’s detectors, providing a concentrated sample of Europa’s atmosphere and effectively increasing the instrument’s sensitivity.

The Europa mission, planned for launch sometime in the 2020s, is now officially in its formulation phase, with a $30 million allocation in NASA’s fiscal year 2016 budget request. The mission would send a solar-powered spacecraft into a long, looping orbit around the gas giant to repeatedly fly past the moon. Over three years, the spacecraft would perform about 45 flybys of Europa at altitudes ranging from 16 miles to 1,700 miles (25 kilometers to 2,700 kilometers). NASA’s Science Mission Directorate, which will be responsible for planning and operating this mission, conducts a wide variety of research and scientific exploration programs for Earth studies, space weather, the solar system, and the universe.

View a short movie about Eyes on Europa