A new space mission
will study a powerful, puzzling force of nature

On March 12, NASA’s Magnetospheric Multiscale (MMS) spacecraft was launched from the Kennedy Space Center aboard an Atlas V rocket to study a fundamental physical process that occurs throughout the Universe — magnetic reconnection. Four identical spacecraft flying in a unique pyramid formation will use Earth’s magnetosphere as a laboratory to discover how energy stored in astrophysical magnetic fields is explosively converted into kinetic energy and heat. Southwest Research Institute (SwRI) leads the MMS science investigation and was responsible for developing and integrating the science payload. 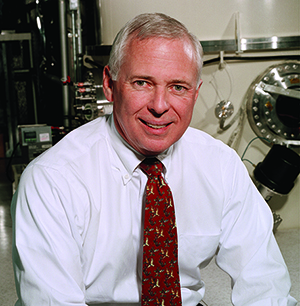 Dr. James L. Burch is vice president of the Space Science and Engineering Division. He is an experimental space physicist investigating various aspects of the interaction of the solar wind with the magnetospheres of the Earth and Saturn and with comets. He has been principal investigator for several NASA space instruments and missions.

At some point, the buildup becomes unsustainable. The energy is released explosively through reconnection on the night side, accelerating plasma particles along Earth's magnetic fields. Particles spiral down Earth’s magnetic field lines at the north and south poles, creating auroras or the Northern and Southern Lights. During especially severe disturbances, powerful electrical currents in the upper atmosphere can disrupt power grids, causing blackouts.

Solar and magnetospheric storms, referred to as space weather, impact technologies such as communications, navigation, and power grids, as well as astronaut health and safety. MMS will improve scientists’ understanding of the fundamental physics that drive space weather.

Magnetic reconnection is not limited to the Sun and Earth, but likely also plays a role in energetic phenomena observed elsewhere in the universe. Insights obtained by MMS may help guide efforts to understand the role of reconnection in more exotic settings.

Scientists also study magnetic reconnection in laboratory experiments and fusion research. The MMS team is collaborating with researchers at Princeton to share insights on this fundamental process. 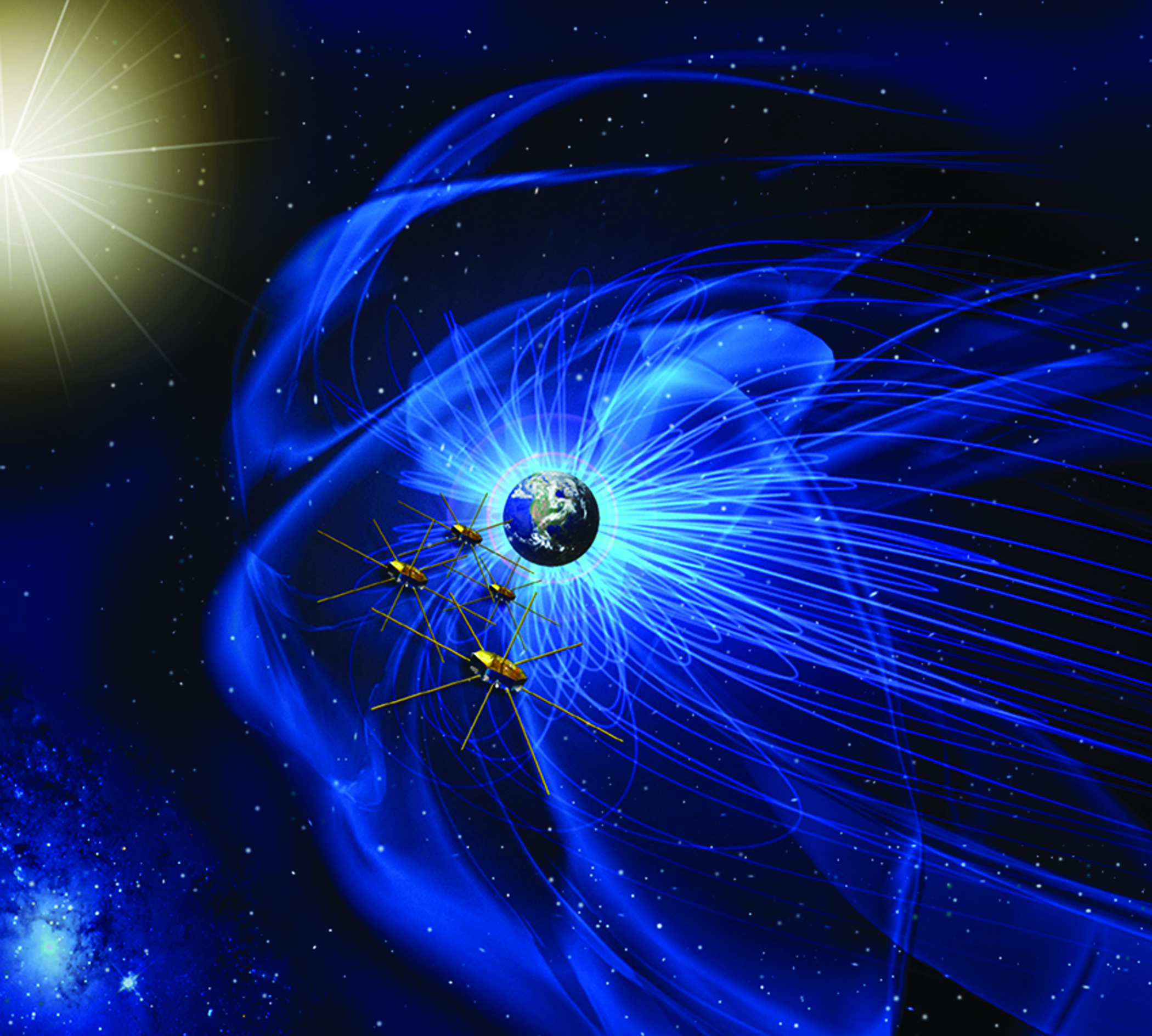 This artist's rendition shows how the four MMS spacecraft will fly in formation in Earth orbit, near the area where the Earth's and Sun's magnetic fields interact.

The devil is in the microphysical details

While scientists know where reconnection occurs and what its effects are, how it occurs is still unknown.  That is the puzzle that the MMS team hopes to solve. The key to this puzzle lies in the diffusion region, where the plasma decouples from the magnetic field, allowing the field lines to break and reconnect. These narrow regions where magnetic fields merge are the target of the MMS science investigation. For the first five and a half months, scientists are checking and commissioning the science payload; science operations begin this September. The two-year science investigation has two phases. In the first phase, MMS will sample reconnection sites on the day side of Earth’s magnetosphere. In the second phase, the four spacecraft will reconfigure to explore reconnection sites in the Earth's magnetotail on the night side.

The four observatories fly in a three-dimensional tetrahedral formation, 10 kilometers to 400 kilometers (~6 to ~250 miles) apart. This configuration allows MMS to probe the diffusion regions in three dimensions. By varying the separation distance among the spacecraft, MMS collects measurements at different scales. The diffusion regions are so thin that the spacecraft will fly through them in less than a second. However, the MMS sensors are designed to make measurements as much as 100 times faster than ever before.

The MMS instruments measure the plasma, energetic particles, and electric and magnetic fields in and around the diffusion region. Each octagonal, 12-foot-diameter spacecraft carries 25 instruments, for a fleet total of 100 instruments. SwRI’s space scientists and engineers also built the mission’s hot plasma composition analyzers (HPCA). These spectrometers use a novel radio frequency technique to measure important minor ions, such as oxygen and helium, in areas of high flux. These ions are difficult to measure in plasmas dominated by protons. SwRI scientists and engineers also built the central instrument data processor for each observatory, providing the interface between the instrument suite and the spacecraft’s command and data handling system.

The four MMS spacecraft are shown in “stacked” position in a NASA facility, shortly before being enclosed within the protective fairing of the rocket that launched them into space. 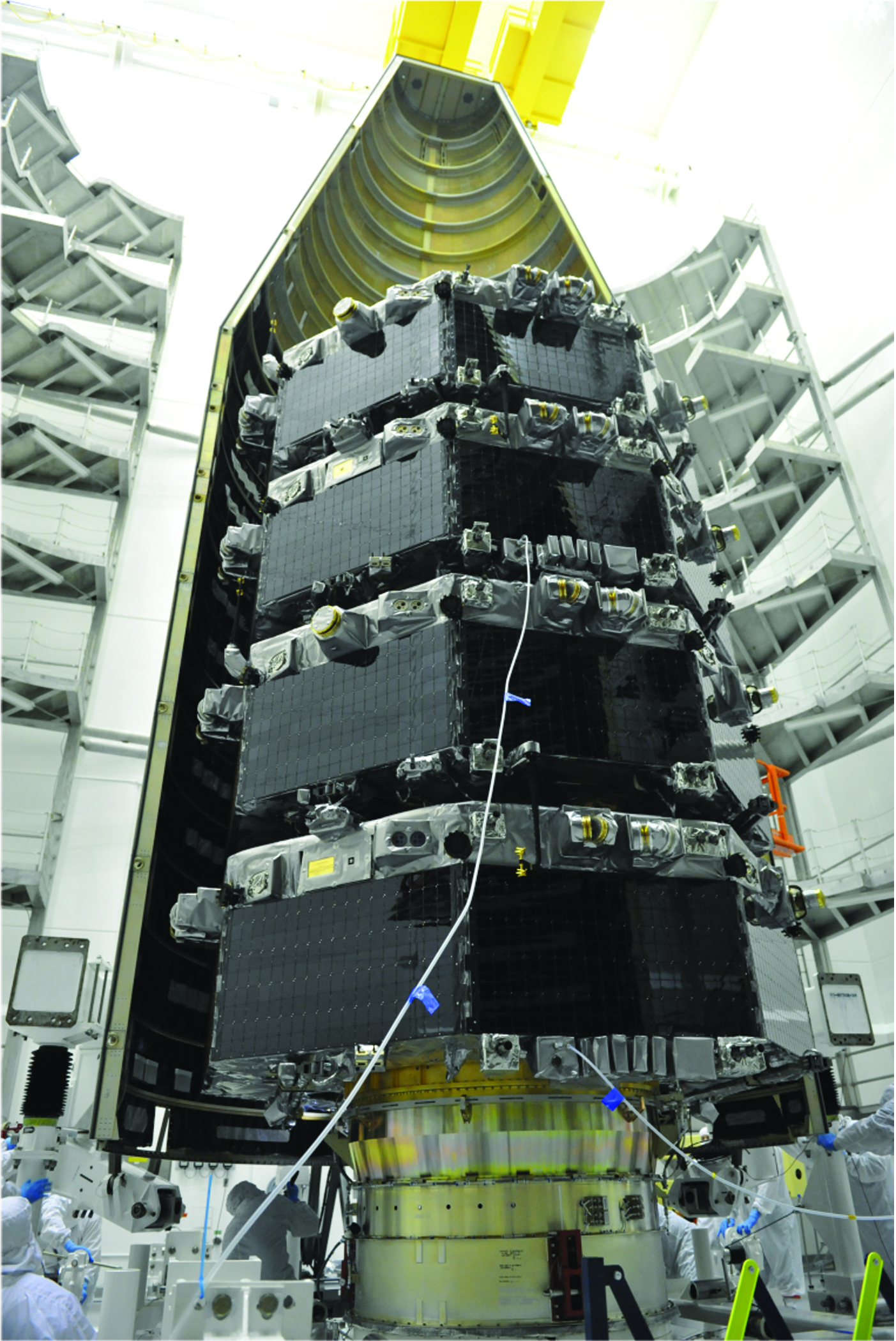 MMS is the fourth NASA Solar Terrestrial Probes Program mission. Goddard Space Flight Center built, integrated, and tested the four MMS spacecraft and is responsible for overall mission management and mission operations. Science operations planning and instrument commanding are performed at the MMS Science Operations Center at the University of Colorado’s Laboratory for Atmospheric and Space Physics in Boulder.