Portable Power from the Sun

Advances in telecommunications and electronics have given warfighters better effectiveness and situational awareness in the field, but those improvements tend to come with added weight and expense. Batteries make up 20 percent of the weight a warfighter must carry in-theater and rank second behind munitions in annual infantry battalion expenditures, according to a 2011 U.S. Army study. Both weight and money could be saved by using secondary batteries that can be recharged through energy harvesting techniques. Solar energy panels known as thin-film photovoltaics are portable and easily deployable, and can be rolled up or folded for storage; thus they are often the preferred system for energy harvesting. However, their energy per unit of volume or weight is limited unless their exposure to sunlight is optimized through the use of concentration optics or solar-tracking mechanisms. A team of engineers from Southwest Research Institute (SwRI) has begun to develop a portable yet rugged solar module system based on state-of-the-art photovoltaics (PV) research. Its approach focuses on treating the solar module as a system of discrete components combined in a way that maximizes conversion efficiency and  minimizes weight, volume and operating cost. SwRI’s solar module system contains a dispersion/concentration PV system, a solar tracking module, a secondary harvesting system and some biologically inspired, anti-reflective coatings.

Dr. Jeffrey L. Boehme is a staff scientist in the Applied Physics Division, with a background in tailoring the color of electrochromic polymers and devices. His work at SwRI has included developing low-cost techniques for fabricating organic light-emitting devices and photo detectors without the use of vacuum. He was principal investigator on an internally funded research product to develop active thermal control devices using electrochromic materials, and is currently program manager of a program to investigate the survivability of nanoparticles in harsh environments. 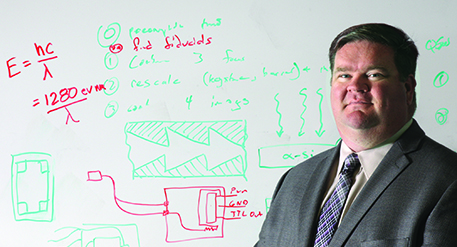 The SwRI-designed system’s primary energy-harvesting unit is a concentrator photovoltaic system (CPVS), which addresses two major factors affecting PV efficiency. The first major factor is the number of photons striking the PV surface. Increasing the number of photons that strike a PV surface is relatively straightforward using light-concentrating optics, such as Fresnel lenses or parabolic mirrors.

The selective absorption of photons within a specific wavelength region allows each photon-sensing junction within the multi-junction PV cell to convert energy very efficiently. For example, according to the National Renewable Energy Laboratory (NREL), the efficiency of four-junction PV cells has reached 37.8 percent, compared to 28.8 percent for the best single-junction PV cell. Although vertically stacked, multijunction PV cells are highly efficient, they are typically more expensive than single-junction cells because of the multi-step processes required to deposit multiple materials, plus the complex deposition procedures required to match interlayer lattice constants and currents. Their higher cost per kilowatt-hour often precludes their widespread use for civilian as well as military applications.

Lateral splitting, on the other hand, exploits the efficiency gains associated with narrow-band illumination by using optical components to split the solar spectrum into multiple narrow-band beams that impinge upon single-junction PV cells manufactured from different semiconductor materials. Because single-junction PV cells are easier to manufacture, a variety of low-cost, off-the-shelf PV cells is available for use in lateral solar cell architecture. The difficulty, and therefore the expense, of those systems often lies in their spectrum dispersion optics.

Researchers have used curved microprism arrays, holographic optical elements and dichroic surfaces to split the solar spectrum into two or more narrowband beam components, with varying degrees of success. Because many of these optical elements can be difficult and expensive to mass produce, the SwRI team selected a spectrum dispersion system that lends itself to easier manufacturing. This system is based on flat sheets of molded linear microprism arrays.

In addition to the spectrum dispersion optics, the team added a Fresnel lens as an optical concentrator to further increase module-level efﬁciency. Parabolic mirrors often have larger acceptance angles than Fresnel lenses, but they are larger, heavier, and often require an inverted PV mounting system. Minimizing weight and volume while maximizing ruggedness was considered more important for defense applications.

The SwRI team also added a solar track-ing mechanism to improve sun-catching efﬁciency. While high-precision, multi-axis mechanisms are the norm for conventional concentrator photovoltaic systems, they are far from ideal. They are often placed on a pedestal and rotated about one or two axes throughout the day. They are typically large, heavy and expensive, primarily because the mechanism must support the weight of the concentrator photovoltaic system as well as wind-induced loads, which can be substantial. Again, weight and volume are critical for mobile Department of Defense (DoD) applications where the human and physical costs of transport are signiﬁcant. With that in mind, the SwRI team implemented a modiﬁed, compact solar tracking mechanism that ﬁts within the enclosed solar module unit. 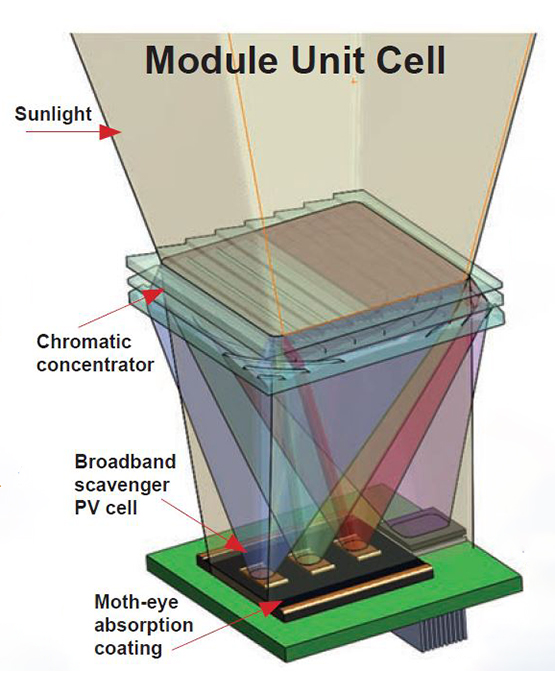 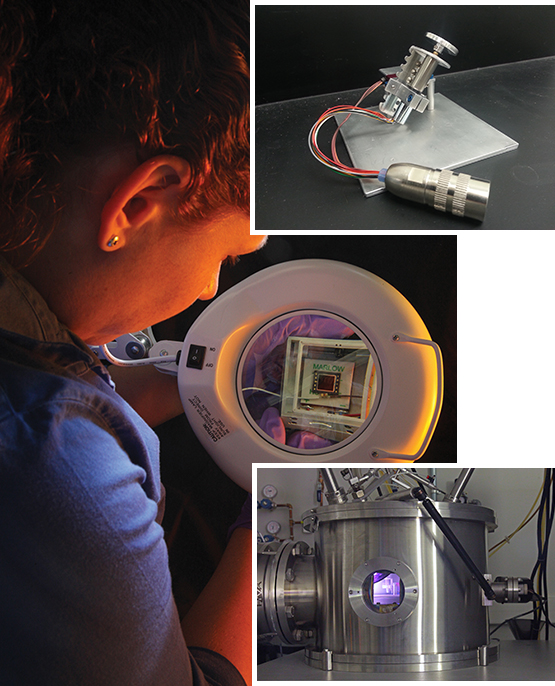 An engineer inspects the photovoltaic cell atop a portable solar module onto which a "moth-eye" light-absorbing  coating has been applied using a rotating fixture (top inset) and a vacuum-deposition chamber (bottom inset).

PV cells operate better at shorter wavelengths, and in most multi-junction PV systems (including SwRI’s two-cell primary energy harvesting system) the lowest-energy photons in the spectrum are not collected. As much as 7 percent of the solar energy resides in the short- to mid-wavelength infra-red (IR) region (1,400 nm – 8,000 nm). Because the solar spectrum is laterally split in the SwRI solar module, some of the IR energy can be harvested by incorporating a thermoelectric generator (TEG) into the solar module design. By placing a heat sink on the back of the unit, a thermal gradient across the TEG will be established (generating electricity) and heat will be dissipated from the primary and secondary PV cells (enhancing the efﬁciency of the energy conversion process). Via these two routes, the solar module system can generate additional energy.

To maximize the efﬁciency of the energy harvesting system, it is neces-sary to maximize the amount of light absorbed by the PV cell. Because of the high refractive index of most PV cells, reﬂectance at the surface is estimated at upwards of 30 percent. To minimize Fresnel reﬂections and improve light capture, the surfaces of PV cells are often textured, creating three-dimensional structures that increase the likelihood that a reﬂected photon will be captured by a neighboring PV cell surface. Anti-reﬂective (AR) coatings also can be deposited onto PV surfaces using various methods. A key issue with AR coatings, however, is their responsivity over the entire solar spectrum and their effectiveness at a variety of incident angles. While several layers with varying refractive indices and thicknesses can be deposited, each layer increases the cost, such that the cost-effectiveness of AR coating may be brought into question.

To address the cost issue, SwRI researchers have begun to develop biologically inspired AR surfaces based on the eye structure of nocturnal moths. Nocturnal moths have excellent night vision due to regular, high-aspect-ratio, sub-wavelength photonic structures on their corneal surface that trap broad-band light over a large range of incident angles. The SwRI team tried to fabricate biologically inspired AR coatings based on the glancing angle deposition technique. In this process, a substrate material is rotated around an axis perpendicular to its surface and deposition ﬂux is applied at an oblique angle. High-aspect-ratio structures are formed by the effect of shadowing during ﬁlm deposition, and the shape of the formed structures is regulated by controlling the substrate rotation parameters.

SwRI researchers examined the effectiveness of various solar module components to develop an optimized lateral solar system module. The theoretical and experimental results indicate that optical losses in the spectrum dispersion system must be carefully weighed against the gains associated with narrowband PV illumination. For the prism angles and materials tested, a 24-degree microprism array is an adequate compromise between Fresnel reﬂection losses and spectrum dispersion ability. Prism orientation and direction play a signiﬁcant role in optical losses and spectrum dispersion. As a result, additional analysis is currently underway. Based on an internal review of module fabrication and assembly processes, surface roughness, prism rounding and machining debris are believed to signiﬁcantly reduce the light transmitted to the primary PV cells. While optical losses are not atypical for lateral solar cell architectures, the SwRI team is currently working to minimize these losses through improving fabrication techniques and incorporating secondary energy harvesting units into the system. More research is needed before the system can harvest solar energy at the desired efﬁciency, but initial results are promising toward development of an optimized solar module system for defense applications.