After 10-year voyage, the spacecraft will rendezvous with a comet in 2014

In terms of time and distance, it’s been among the longest space voyages. After 10 years and no fewer than four gravity-assist swings past Earth (3) and Mars (1), the European Space Agency’s Rosetta spacecraft will pull into a gentle rendezvous orbit around Comet 67P Churyumov-Gerasimenko (C-G for short) sometime in August  2014.

At the end of January 2014, the comet-chasing spacecraft was awakened from a two-and-a-half-year hibernation and set on its ﬁnal approach toward rendezvous, even as C-G itself begins its closest approach toward the Sun, reaching perihelion on August 13, 2015 at 1.24 AU from the Sun (1 AU = the distance between Earth and the Sun).

Comet CG is one of the smallest destinations ever for a spacecraft mission. At just 3 kilometers wide and 5 kilometers long, its gravity is so weak that when Rosetta dispatches a lander named Philae to the comet’s surface in November 2014, the lander will ﬁre a harpoon into the comet to act as an anchor so its spring-cushioned legs won’t rebound it into space.

During Rosetta’s rendezvous mission, its instrument payload will gather data to investigate scientiﬁc questions such as how and when the comet’s nucleus will become active, what properties the nucleus possesses, what makes up the neutral gas and plasma that form its coma or “tail,” how the comet interacts with the solar wind, and what comprises its cometary dust. 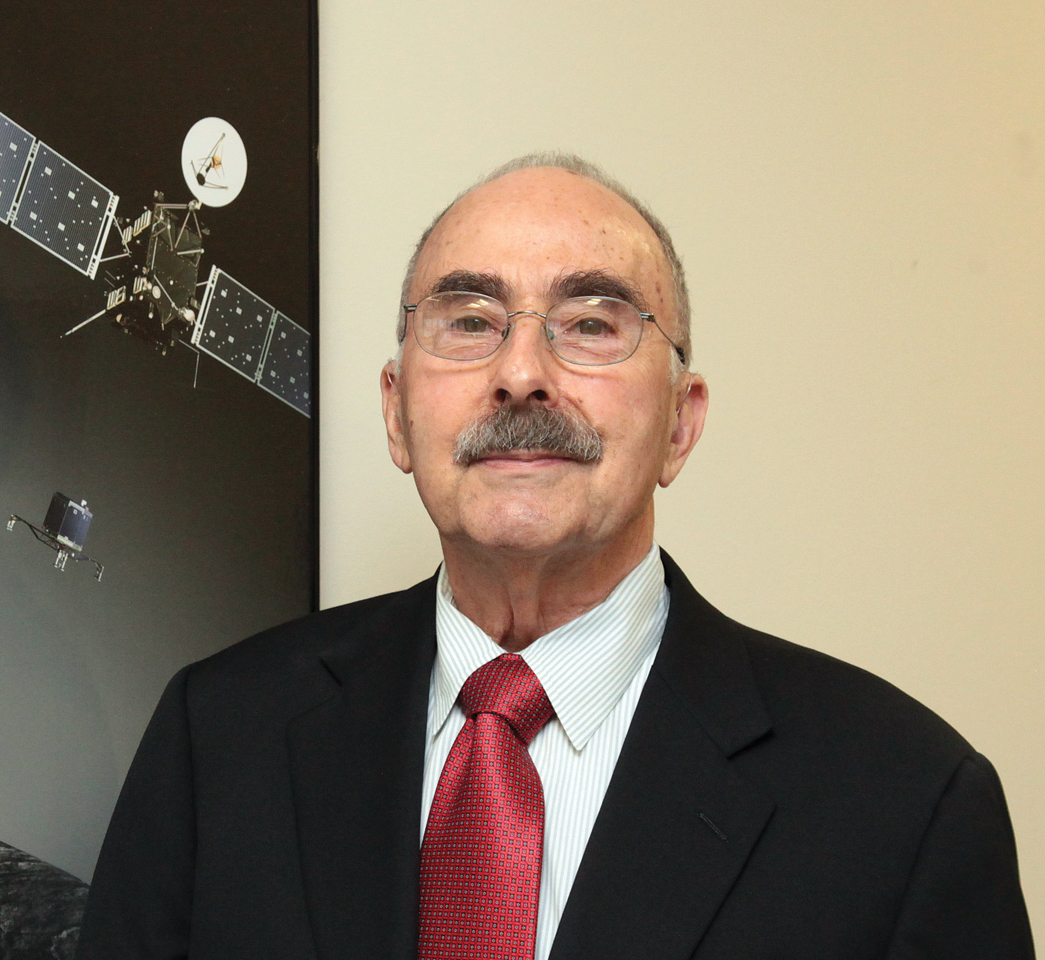 Dr. Raymond Goldstein, a staff scientist in the Space Science and Engineering Division, has an extensive background in the design, testing and data analysis of laboratory as well as space instrumentation. He led the preliminary design of an ion mass spectrometer that flew by comet Halley on the European Giotto spacecraft and has been co-investigator for instruments aboard NASA and European Space Agency missions, including DS-1, Rosetta and Bepi Columbo.

The why and what of studying comets

Scientists believe that comets were born in the outer reaches of the Solar System, more than 4 billion years ago when the planets were forming. Far away from the Sun, they formed out of icy material as well as rocky matter, which turned them into the “dirty snowballs” (or perhaps “icy dirtballs”) of space. As the most primitive objects in the Solar System, comets are believed by many scientists to have kept a record of the physical and chemical processes that occurred during the early stages of the evolution of the Sun and Solar System. Cometary material, therefore, represents the closest we can get to the conditions that occurred when the Solar System was born. Like the original Rosetta Stone, which allowed 19th-century archeologists to translate ancient Egyptian hieroglyphics for the ﬁrst time, the Rosetta spacecraft’s instrument suite will help 21st-century scientists better understand the composition and processes that existed at the Solar System’s formation.

While planets orbit the Sun in roughly circular fashion, comets’ orbits are notably eccentric, taking an elliptical path that can alternate between the dark and cold of the Solar System’s edge and the Sun’s burning heat. For example, Comet C-G’s 6.45-Earth-year orbit varies from 1.24 AU to 5.68 AU.

When a comet approaches the Sun, the fuzzy, tailed star-like body that we see in the night sky is the product of a combination of physical and electromagnetic phenomena. The nucleus of a comet – the dirty snowball part – consists of not only ice and rock, but an exterior dust coating, or mantle. As it speeds toward the Sun, the comet plows directly into the solar wind, a stream of electrically charged particles, or plasma dragging along a magnetic ﬁeld, ﬂowing outward from the Sun at a million miles an hour. A thick plasma bow-shock wave forms in front of the comet’s nucleus.  Meanwhile, ultraviolet solar radiation begins heating the ice in the nucleus as the comet nears the Sun, causing outgassing and ionizing water vapor, forming the “coma” and  tail structure that we see and think of as a comet. Dust particles become electrically charged and levitate off the comet’s surface, contributing to the “tail.”

Rosetta’s instruments and what they do

Rosetta and the Philae lander will approach Comet C-G with an onboard suite of instruments specializing in unlocking the interactions of the comet and the plasma environment as it reaches its nearest approach to the Sun. The spacecraft is powered by two solar panels with a combined area of 64 square meters, stretching out 32 meters tip-to-tip.

The Philae lander carries 10 additional instruments, which include an alpha proton X-ray spectrometer, an evolved gas analyzer, a magnetometer and a plasma monitor, a sample and distribution device, a surface electric sounding and acoustic monitoring experiment, and a cometary sampling and composition experiment.

SwRI’s Ion and Electron Sensor (IES), a member of the Rosetta Plasma Consortium (RPC) consisting of ﬁve particles and ﬁelds instruments, measures the ﬂux of electrons and ions as functions of energy and direction. Its principal investigator is Dr. Jim Burch, vice president of SwRI's Space Science and Engineering Division. Along with other members of the RPC, it will investigate the solar wind’s interaction with the comet nucleus and atmosphere (i.e. coma), and the processes that govern the composition, structure, and dynamics of the atmosphere. An important aspect of the measurements is observing the evolution of the density and structures in the coma as C-G moves closer to the Sun. This has never been done before. Ground-based observations of comets give only the overall appearance and composition and large-scale structure of the coma. Results of the measurements can then be compared with predictions from theoretical models. Disagreement means corrections to the models will be in order.

The ALICE instrument from SwRI, whose principal investigator is SwRI  Associate Vice President Dr. Alan Stern, is an ultra-violet (UV) imaging spectrometer, measuring the intensity of UV light emitted by or reﬂected from the nucleus or coma as a function of wavelength. These measurements will help determine the properties of the nucleus surface and dust grains, plus the composition and details of the chemical reactions in the emitted gases. As in the case of IES, ALICE will also follow the evolution of these characteristics of the comet as it moves along its orbit around the sun. Some of the processes that occur at a comet that both IES and ALICE will be studying also are known to occur throughout the universe.

Rosetta is a project of the European Space Agency (ESA) with contributions from several individual European countries as well as NASA.