Our precious home planet orbits within a veritable shooting gallery of rocky and metallic asteroids. Most of these so-called near-Earth asteroids (NEAs) originated in the main asteroid belt between the orbits of Mars and Jupiter. This zone separates the rocky planets in the inner solar system from the gas giants. These asteroids are remnants left over from the formation of the inner planets. These relics provide valuable evidence of the processes at work some 4.5 billion years ago as our own blue world began to take shape. For this reason, asteroids in general, and relatively easy-to-reach NEAs in particular, are beckoning targets for scientific exploration.

In the time of the dinosaurs, an impactor less than 10 miles in diameter hit the Earth, forming the Chicxulub crater buried beneath the Yucatan Peninsula in Mexico. Scientists theorize that the event caused worldwide climate disruptions resulting in a mass extinction of 75 percent of the plant and animal species on Earth, including all non-avian dinosaurs.

But some of these same lumpy little neighbors approach so close to Earth that they could potentially slam into us. The nearly 200 impact craters preserved in landscapes across the world are clear evidence that large impacts have happened in the past, sometimes having globally devastating effects. One of the most infamous impacts happened 65 million years ago, when scientists theorize an asteroid or comet struck the earth and caused the extinction of the dinosaurs.

Scientists have detected nearly 19,000 NEAs to date, including comets, out of a population thought to number in the millions. The good news is NASA has identified and tracked 95 percent of the potential civilization- enders — those more than half a mile in size — and none are an impending threat to the Earth. But what about the smaller, more prevalent NEAs that are considered city killers? 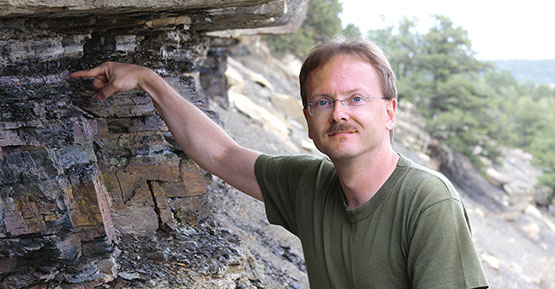 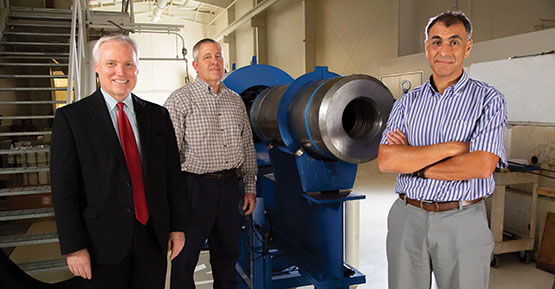 (Left) Dr. Dan Durda, a planetary scientist at SwRI’s branch in Boulder, Colorado, specializes in impact studies, hypervelocity experiments and asteroid evolution and exploration. Here he’s pointing to a gray layer in the rock that marks the boundary between the Cretaceous period, dominated by dinosaurs, and the Paleogene period, when dinosaurs had disappeared from the face of the Earth. The Cretaceous-Paleogene boundary, found in sedimentary rock around the world, contains iridium, an uncommon element associated with asteroids.

Dodging a Bullet, Sort Of

Asteroid impacts of that size are unique in the range of natural disasters in that they potentially can be prevented. Unlike the dinosaurs, humans have knowledge of the threat and the technology to deflect the path of a small NEA, turning an impending impact into a harmless near miss. Only a small change in a threatening asteroid’s orbit is needed to swing it away from Earth, as long as it happens in sufficient time before the predicted impact. Southwest Research Institute space scientists have combined forces with SwRI ballistics engineers to better understand how to accomplish that.

One of the more technically practical methods of deflecting a potentially hazardous NEA is by kinetic impact. A spacecraft or other projectile aimed at the object could slam into it, changing its momentum enough to cause the minor orbital change required to avert impending disaster.

Changing the momentum of an asteroid this way offers a veritable one-two punch: the direct momentum transfer of the impacting projectile, pushing it forward, and the asteroid’s recoil from the crater ejecta, or debris erupting from the impact crater. The ejecta transfers momentum, propelling the target away in an “action-reaction” fashion, much like a rocket launches when high-speed gas erupts from the rear of the vehicle.

Knowing just how much momentum change is needed to change an NEA’s path adequately is a function of its size, composition and structure. Gathering this information about representatives of the known population of potentially hazardous objects is crucial. 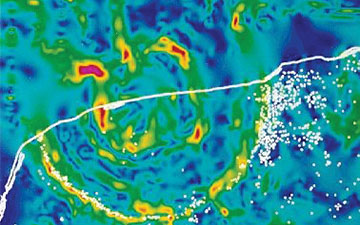 A gravity anomaly data map shows the concentric features of the Chicxulub impact crater, associated with the dinosaur extinction event around 65 million years ago. The Mexican coastline is shown as a white line. White dots represent sinkholes tracing the boundary of the underlying crater thought to have been caused by an asteroid roughly the size of Manhattan. 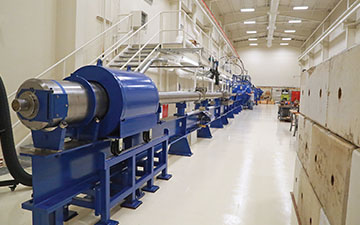 To better understand how to deflect incoming asteroids with kinetic impactors, the team will use SwRI’s new large two-stage light-gas gun featuring a 38-mm-diameter launch tube with the ability to achieve velocities close to 16,000 miles per hour. This hypervelocity launcher expands test parameters to help the team understand how impact ejecta change the momentum of targets. 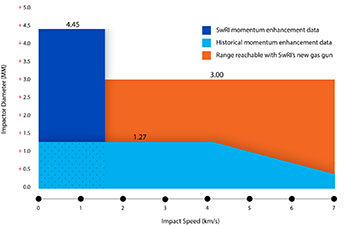 Currently, SwRI has momentum enhancement data for sizes and speeds provided by our 50-mm powder gun and the AVGR light-gas gun experiments, which fall in the lower blue region. The new large hypervelocity gas gun will expand the understanding of impact ejecta effects on momentum change.

Most asteroids are irregularly shaped, with only a handful of the largest having enough gravity to pull them into spherical shapes. The majority of asteroids from the outer reaches of the Asteroid Belt are classified as C-type. Made of carbon with other rocks and metals, these dark objects are thought to be fragments of collisions between asteroids. Closer to the Sun, most asteroids are reddish S-types, principally made of silicate compound rock. Some rare asteroids are mostly metallic.

Many asteroids are solid, while others are more like piles of rubble left over from collisions and held together by the force of their gravity. Some are binaries, where two similar-sized asteroids orbit around each other as they collectively circle the Sun.

To design and plan mitigation strategies using the kinetic impact method, scientists need to perform experimental laboratory studies to represent the various asteroid compositions and configurations. Then, experiments need to be scaled-up to represent actual real-world applications based on analytical relationships, experimental studies and numerical models.

Current research suggests that momentum added by the crater ejecta can exceed that from direct impactor momentum transfer by a factor of 10 or more for some types of targets. How this varies with target size and composition is uncertain.

Borrowing a page from 1998’s top-grossing film Armageddon, NASA’s Double Asteroid Redirection Test (DART) mission, scheduled to launch in 2020/21, offers a more realistic solution to an asteroid aimed at Earth. DART is the first full-scale planetary defense-driven test to understand how to prevent an asteroid Armageddon using a kinetic impact. The binary NEA Didymos is the target for DART. While Didymos’ primary body is approximately half a mile across, its partner is a tiny moon less than a tenth of a mile wide.

Ballistics is the science dealing with the launch, flight, behavior and effects of projectiles, such as bullets.

The Didymos binary is a handy test-bed; DART is designed to slam into its “moonlet,” nudging its orbit around its primary, while not changing Didymos’ orbit around the Sun. That way, scientists can study the effects of an impact with minimal risk to Earth. When the DART spacecraft crashes into the moonlet, scientists will use ground- and space-based optical and radar observations to assess how “Didymoon’s” orbit changes in respect to its primary body.

SwRI scientists and engineers are playing a lead role in efforts aimed at better understanding the ejecta momentum enhancement factor (often designated “β”) to help predict the outcome of the DART impact. In a separate NASA-funded project, SwRI’s team has made important progress in scaling laboratory impact experiments. Using data from centimeter- and decimeter-scale target laboratory experiments and meter-scale outdoor range experiments, SwRI scientists can get a better idea of how β actually scales. 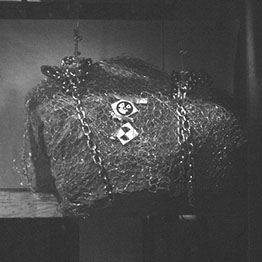 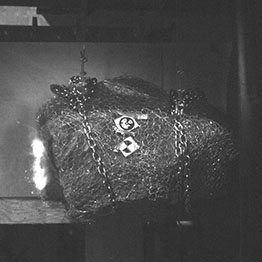 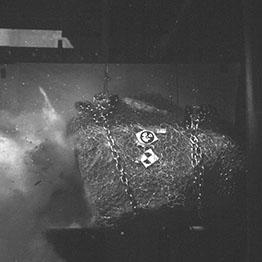 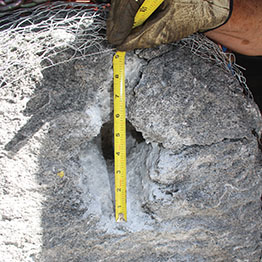 The SwRI Ballistics and Explosives Range experiments used this meter-scale pumice target to understand how the impact ejecta affect momentum change during kinetic impact with an asteroid of a similar composition. This experiment corresponds to the simulation on the cover. 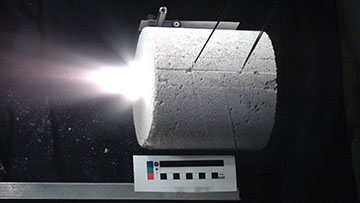 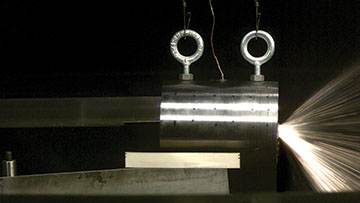 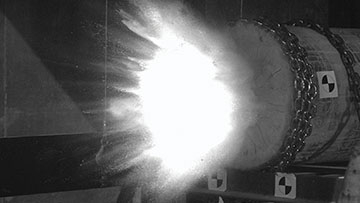 The team has used a 50 mm cannon at the SwRI Ballistics and Explosives Range, supplemented by smaller scale, higher energy experiments using the NASA Ames Vertical Gun Range (AVGR) to cover the full range of experiment parameters. SwRI’s 50 mm gun fires up to a 260-gram, 4.45 cm aluminum sphere about the size of a golf ball at about 2 kilometers per second. AVGR’s two-stage light gas gun is capable of shooting quarter-inch BBs at speeds of about 6 km/s, replicating the actual speed of the DART spacecraft as it crashes into Didymos’ moonlet. To extend the parameters, SwRI recently commissioned a 38 mm two-stage light-gas gun, which will be able to launch 39-gram aluminum spheres about the size of a 50-cent piece at speeds up to 7 km/s, which is over 15,000 miles per hour. The capability to launch larger projectiles is very important because with asteroid kinetic impacts, size matters. The scaling of momentum enhancement is nonlinear. For example, doubling the size of the impactor often will more than double the impact’s resulting momentum enhancement.

Ideally, impact experiments would use targets made from actual asteroid material. But large meteorite samples are too rare and valuable, so targets are typically asteroid analogs. These stand-ins include cylinders of natural rock such as granite, pumice and sandstone as well as faux asteroids made of concrete and a porous mixture of plaster and sand. Experiments used iron-nickel alloys that mimic the rare metallic asteroids. Related AVGR research conducted ballistic tests with small meteorite specimens. Those data provide important context, helping link larger-scale impacts to analog materials with calculations and simulations for impacts on asteroids such as the planned DART impact.

The team is still analyzing the data, but some important results have emerged that not only support previous notions about how β might scale with target size and impact speed but also raise new questions that beg for follow-up investigation. SwRI data clearly show that the momentum enhancement increases with impact speed, a result that agrees well with expectations from analytical predictions and other research. Somewhat surprisingly, however, size scaling appears to depend heavily on composition. Impacts into materials like granite or concrete scale differently than those into porous plaster-sand and pumice. The size of these latter targets did not affect the push provided by the ejecta as much. 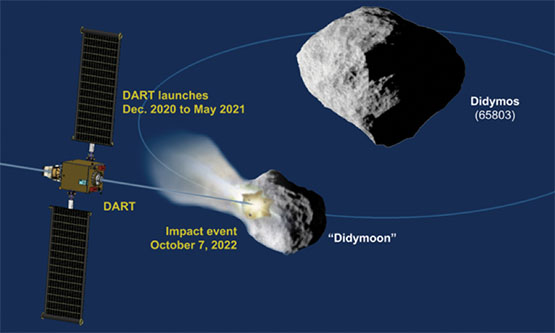 Schematic of the DART mission shows the impact on the moonlet of asteroid (65803) Didymos. Post-impact observations from Earth-based optical telescopes and planetary radar would, in turn, measure the change in the moonlet’s orbit about the parent body.

The SwRI team thinks the difference lies in the inherent structures of the materials. For example, the larger the chunk of granite, the larger the flaws traversing its crystalline structure. Consider a large piece of chalk, which snaps easily under pressure due to the length of its structural flaws. However, a nub of chalk is much more difficult to break apart by hand. In contrast, pumice is characterized by similar-sized voids distributed throughout the rock, regardless of the sample size. So if the theory holds, a heftier size does not necessarily offer king-sized flaws that cause more substantial shifts associated with impact ejecta; the object’s composition is a key factor to consider.

Several questions naturally arose from these results. What is the fundamental difference between the internal structure of plaster-sand and pumice targets, and those of granite, concrete and aluminum? How do impact data relate to data from observed meteor fireballs that suggest low-strength meteorites? What are the implications for the strength and size scaling of β for small asteroids? Exploring answers to these questions and others raised in light of planning activities in support of the DART mission will be the focus of continuing research.

The answers are critical to protecting the Earth from a potentially devastating asteroid impact.