This issue hit close to home for Southwest Research Institute staff when local San Antonio Police Officer Stephanie Brown was killed on duty by a wrong-way driver with a blood alcohol level three times the legal limit. That tragedy was the impetus for the Texas Department of Transportation (TxDOT) to form the San Antonio Wrong-Way Driver Task Force, a multi-agency effort addressing the issue.

SwRI engineers have evaluated how intelligent transportation technology can be used to mitigate wrong-way driving events. By tapping the ability of vehicles to communicate with each other and with roadside infrastructure, SwRI engineers are fighting wrong-way driving by enabling traffic management centers to detect these dangerous situations and warn drivers in real time.

The next wave of ITS technology will implement connected and autonomous vehicles to improve safety and mobility. SwRI develops and tests multiple technologies that will allow motorists, unmanned vehicles and transportation centers to share real-time data on traffic conditions and roadway incidents. The algorithms and software that enable driverless vehicles can also provide traffic management systems and connected vehicles with data on the speed, location and proximity of wrong-way drivers.

Shortly after its formation, the San Antonio Wrong-Way Driver Task Force conducted a study to determine when most of these incidents occur. Using the SwRI-developed TransGuide transportation management system, the task force found that more than 80 percent of wrong-way driving events occur between 10 p.m. and 6 a.m., with 45 percent between 2 a.m. and 4 a.m. The timing corresponds with impaired motorists leaving bars and clubs at closing time. Limited visibility at night exacerbates the problem. These factors pushed TxDOT to develop new countermeasures: more signs on highway exit ramps outfitted with flashing lights to alert drowsy or impaired drivers. 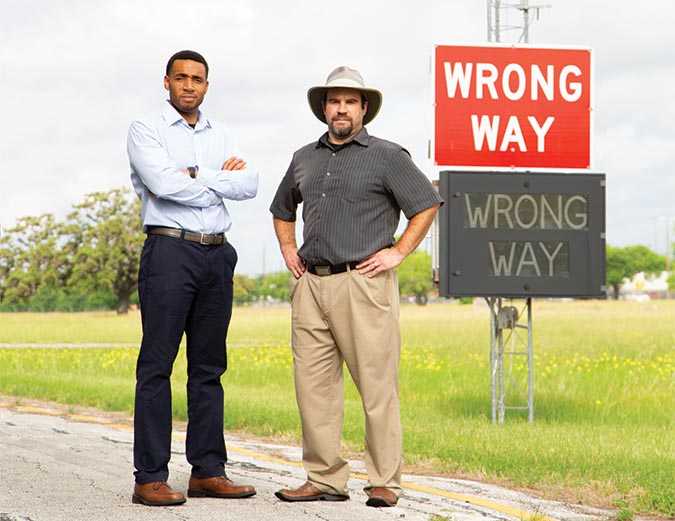 ABOUT THE AUTHORS
Dr. Doug Brooks (left) is a group leader in SwRI’s Intelligent Systems Division who specializes in creating automated driving technologies for commercial and military vehicles to improve safety and mobility. Cameron Mott is a senior research analyst focusing on projects that improve the capability, safety and security of automobiles by leveraging connected vehicle and intelligent highway applications. 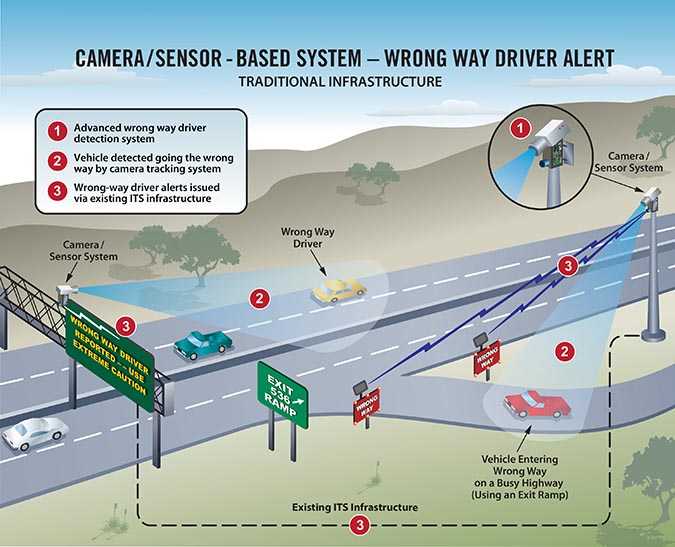 The sensor-based system takes advantage of existing advanced transportation management system technology, such as dynamic messaging systems and wrong-way signage, to warn wrong-way drivers and other vehicles on the highway.

One solution pairs thermal cameras with perception algorithms SwRI developed for driverless vehicles and the manufacturing industry. The perception algorithms process visual inputs from a video camera, classifying patterns to isolate a wrong-way driver from other objects and backgrounds in the visual field.

The second solution uses connected-vehicle technology that enables communication between vehicles, infrastructure and transportation agencies to warn the wrong-way driver as well as other motorists in the vicinity. The system also identifies and helps track wrong-way motorists.

DETAIL
Dedicated short-range communications (DSRC) are one- or two-way, short-range radio/antenna systems specifically designed for connected vehicle and intelligent transportation systems. DSRC wireless signals utilize the 5.9 GHz band, which the Federal Communications Commission set aside for ITS safety and mobility.

These systems can both be integrated into intelligent transportation systems, such as the SwRI-developed ActiveITS™ system. Transportation agencies across the country use ActiveITS, including Texas’ and Florida’s statewide systems. Traffic management centers, including San Antonio’s TransGuide, use the technology to communicate traffic alerts with motorists via dynamic message signs. As more vehicles are connected to intelligent traffic networks, the vehicles themselves will be able to receive traffic and safety alerts about wrong-way drivers and other roadway hazards.

Much like diet and exercise are two ways to lose weight that can work better when used together, SwRI’s two solutions to address the wrong-way driver problem could potentially work better together as well.

SwRI’s video perception wrong-way driver solution is a simple, low-cost solution using a thermal camera and software integrated into a traffic management system. The solution applies a stabilization algorithm to raw video from a thermal camera to mitigate vibrations such as those caused by wind gusts. The images are then processed by two additional algorithms operating in parallel. A background-subtraction algorithm removes data that remain consistent between frames, enabling the system to focus on moving vehicles. A motion estimation algorithm determines the flow of pixels across multiple frames, enabling the system to determine the travel direction for vehicles. Together, the two algorithms produce regions of interest and a calculated direction of travel. The final inputs are made available via a custom user interface that allows DOT personnel to define the lanes to be monitored and the direction of travel for each lane. Then, the background-subtraction and motion-estimation algorithms determine if a vehicle in a defined lane is traveling in the wrong direction.

Adding vision-based sensing to other detection systems overcomes a major shortcoming of radar-based detection systems. While radar accurately isolates movement, it often cannot distinguish the type of object detected. This can lead to false alarms, such as mistaking moving tree branches for wrong-way vehicles. By comparison, SwRI’s vision-based detection system can distinguish between a wrong-way vehicle and other objects, which greatly improves performance. The SwRI system can monitor multiple lanes, detecting vehicles up to 130 feet away at both city and highway speeds. It achieved an accuracy rate of 99 percent, or about one false positive per week. The single-unit, easy-to-deploy, low-cost system supports event logging and messaging using existing ITS infrastructure. 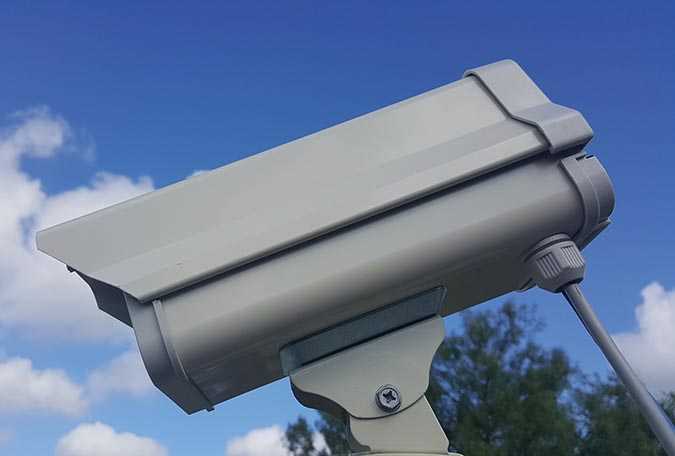 The video perception system offers a low-cost option for upgrading a transportation management system to accurately detect vehicles traveling the wrong way on a highway. 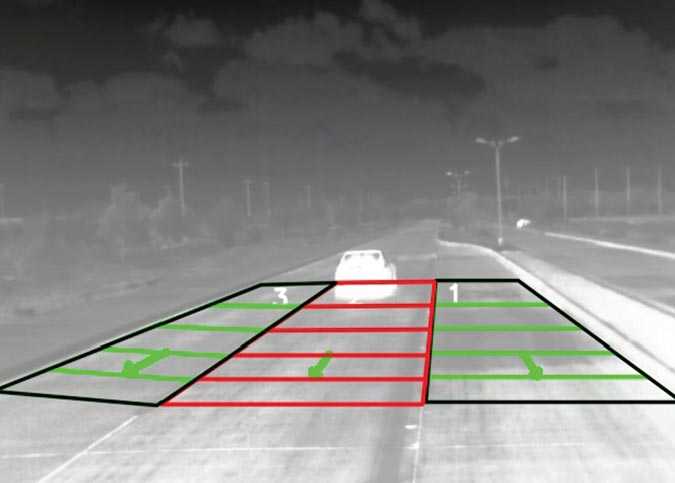 The video perception system can identify wrong-way vehicles traveling at high speeds, day or night and in adverse weather conditions with 99 percent accuracy.

Working with the Texas A&M Transportation Institute (TTI), SwRI engineers also demonstrated a wrong-way driver solution that leverages connected vehicle capabilities. This system can detect wrong-way connected vehicles to immediately and directly alert connected drivers in the vicinity. The team recently incorporated this functionality into Texas’ Lonestar™ traffic management system. Existing “disconnected” solutions rely on radar or image processing and 911 emergency calls. The information is processed, and then a public alert reaches travelers via dynamic message signs along the highway. The “connected” system can immediately alert a wrong-way driver in his or her own vehicle, as well as other drivers in the area. The team demonstrated functionality using multiple vehicles on a closed course at the Texas A&M University RELLIS Campus.

Drawing on extensive connected vehicle experience, the SwRI teams have developed the equipment and expertise needed to quickly prototype and prove connected vehicle functionality. Through this project, Dedicated Short Range Communications (DSRC) radio connectivity is integrated with Lonestar through roadside equipment. Acting as the infrastructure component in vehicle-to-infrastructure deployment, the equipment gathers information from, and sends alerts to, connected vehicles that are in range. It alerts both the wrong-way driver and other drivers nearby.

For now, most connected vehicle technology is limited to high-end luxury cars, but any vehicle can become a connected vehicle using a SwRI-developed portable onboard system. These systems contain a DSRC radio and antenna designed for vehicles as well as a tablet to display information to the driver. For this project, the team leveraged the lane-level accuracy enabled through algorithms running on the DSRC radio. With this lane-level position accuracy, the system establishes highly accurate wrong-way driver zones on the Lonestar system and greatly reduces false positives compared with traditional sensors. 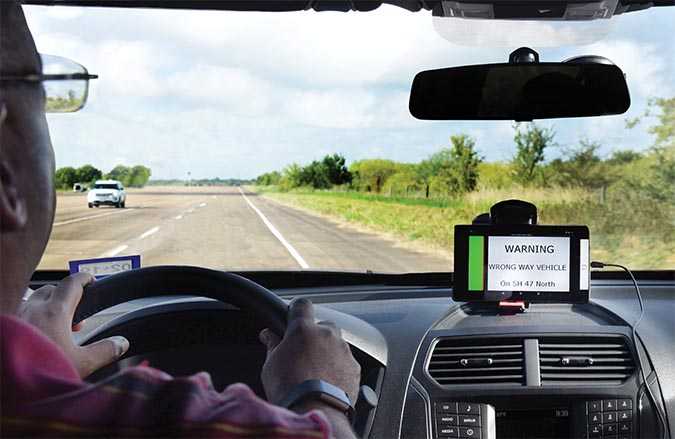 In the connected vehicle network solution, this right-way driving vehicle shows a wrong-way vehicle through the front window. Additionally, the in-dash display shows a warning about the vehicle and identifies the roadway that they are using. 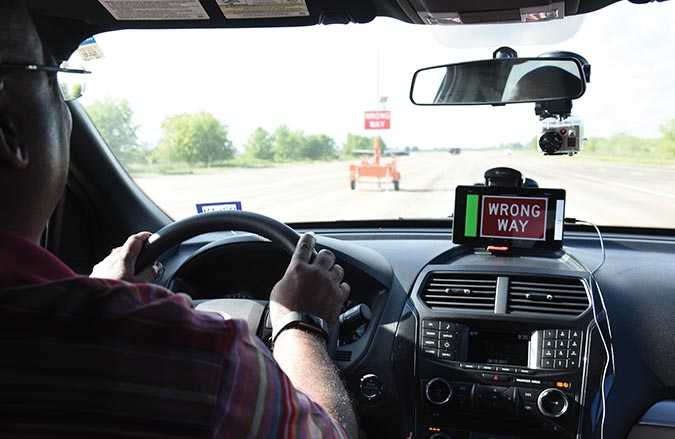 This in-dash display warns a wrong-way driver as he enters an exit ramp. 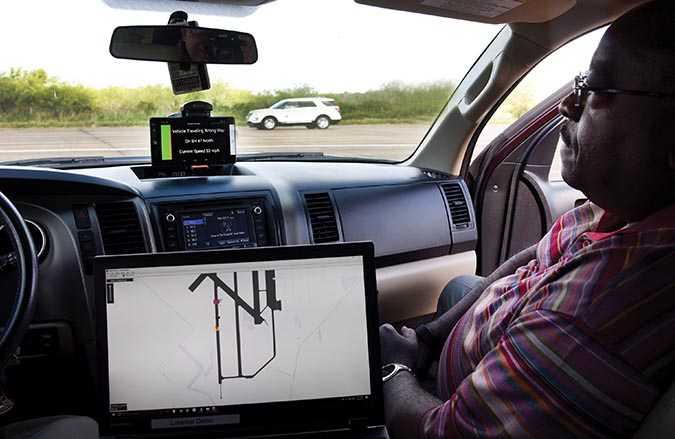 Using the information provided in the connected vehicle solution, both travelers and first responders can be informed about the situation. Through the integration with ActiveITS software, Lonestar traffic managers are provided with an alert and a map of the area where a wrong-way driver was detected. 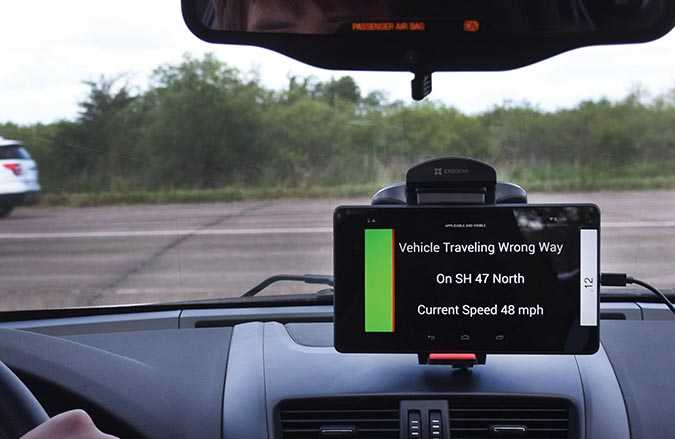 Real-time information is essential for law enforcement officers responding to reports of a wrong-way driver. Fully equipped connected cruisers can provide law enforcement officers with additional information, including offender vehicle speed. The team overcame DSRC range limitations by propagating the alert to connected vehicles further along the road. SwRI is continuing its efforts to improve the safety of Texas drivers during wrongway driving events. For instance, integrating additional technology, such as the aforementioned image-based or radar sensors, into the network system will improve its effectiveness.

The team will deploy the network solution on a planned Texas Connected Freight Corridor, which will use advanced communications technology to improve safety and reduce traffic congestion along some of Texas’ busiest interstates. More than 1,000 freight vehicles outfitted with connected vehicle technology will benefit from the advanced real-time warnings the system offers. Through this effort, the vehicles will help protect their drivers from wrong-way driving situations.

Officer Brown’s tragic death created a legacy that extends well beyond the jurisdiction where she served. At the intersection of autonomous robotics and advanced networking, SwRI is helping state and federal agencies address the critical safety issue of wrong-way driving incidents.