The fourth High-Efficiency Dilute Gasoline Engine (HEDGE®-IV) program incorporates new and more aggressive efficiency, performance, and emissions goals that are in line with existing and potential future regulations and expectations. The overall goal is to develop the most cost-effective solutions possible for future gasoline engine applications. In addition, after 12 years of research focused primarily on stoichiometric, high-EGR applications, the consortium has begun to examine topics outside of cooled EGR that contribute to high-efficiency engine operation. Two new research areas have been introduced in HEDGE-IV; one will focus on the potential for gas-stream composition change with membranes while the other will look toward increased combustion speed through microwave enhanced combustion.

HEDGE-IV will continue to target high thermal efficiency of 45% BTE. In addition, HEDGE-IV will target a power density of 75 kW/l in combination with high thermal efficiency. At this power density the internal combustion engine can remain as the vehicle prime-mover. Technologies developed in HEDGE-IV will aim to improve cycle-CO2 emissions by 10% over today's mainstream gasoline-powered vehicles, as well as meeting the low emission vehicle III (LEV III) standards. The emissions goals include the most stringent regulations in each of the three developed markets:

HEDGE-IV will continue the work performed in HEDGE®-I, HEDGE®-II, and HEDGE®-III and launch as a new four-year, annual renewal cooperative research program dedicated to the development of pre-competitive technologies that will be needed to cost-effectively achieve future emissions and fuel consumption requirements for world markets.

The objective of the HEDGE-IV Consortium is to expand upon the work conducted in the HEDGE-I, HEDGE-II and HEDGE-III programs, thereby further developing efficiency improvements for gasoline engines. In HEDGE-IV, SwRI will begin to shift the emphasis of the program to a more general examination of high-efficiency technologies, with less direct emphasis on cooled EGR. The HEDGE-IV program will allow opportunities for member companies to jointly examine the high risk/high reward technologies that they might not otherwise consider, due to resource constraints that might be encountered by member companies individually pursuing the evaluation of these technologies. 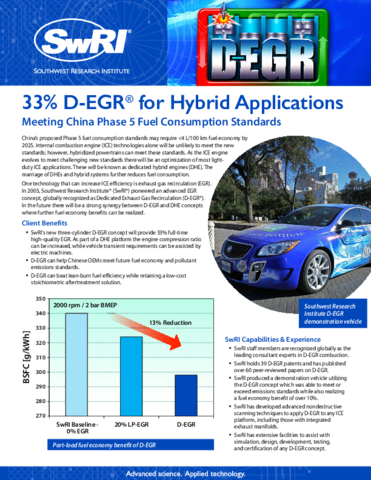