Southwest Research Institute, a leader in fuels and lubricants research, completed a project, sponsored by the Coordinating Research Council, to develop and evaluate a new test methodology to assess the deposit-forming tendencies of a given test fuel. The test combines a specialized injector test rig with an instrument to measure the thickness of deposits in the injector. That instrument is a variable angle spectroscopic ellipsometer (VASE). 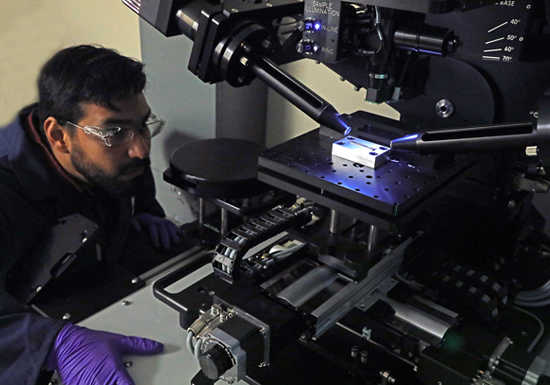 Under this method, a single, new injector is installed in the test rig. The test fuel is flowed through the injector, under controlled conditions, for a fixed period of time. After that, the injector is removed, disassembled, and visually inspected.  The visual inspection looks for signs of injector sticking and visual deposits on internal parts. IDID can result from specific fuel chemistries, additive interactions, contaminants, and other factors. The deposits are thin, measuring from tens to hundreds of nanometers thick. The thickness often makes them difficult to see with the unaided eye. Additionally, some deposits have little or no visible color, so even thick deposits are difficult to visualize.

Until now, the only solution was to run large amounts of fuel through the injector or dope the test fuel with extra-high levels of additives and contaminants. Doing so usually resulted in IDID that could be ranked visually, but most researchers agreed that these are not realistic results compared to standard engine operation. To overcome this shortfall, SwRI incorporated spectroscopic ellipsometry technology that had been used primarily by computer chip manufacturers. IDID testing, which previously took hundreds of hours and required several hundred gallons of fuel, has been reduced to a seven-hour process that uses roughly seven liters of fuel.

Once the test injector has been disassembled and inspected, the injector pintle is placed in a custom fixture in the VASE. Conditioned light from a quartz tungsten halogen lamp in the VASE is focused at the deposit. The collimated and polarized light passes through the deposit, reflects off the surface of the pintle, and passes back through the deposit to the detector. The light that passes through the deposit undergoes a shift in the azimuth of polarization. The change describes an ellipse with the polarity of the original light that is related to the thickness of the deposit.  This technique can measure deposits that are as thin as 10 nanometers and as thick as 1,000 nanometers, regardless of the color of the deposit.

The Power of Spectroscopic Ellipsometry

SwRI performs a wide range of other research, development, and testing on diesel engines, pumps, injectors, and fuels and lubricants in our Fuels and Lubricants Technology Laboratory.  We also specialize in fuel cleanliness and the impact of Filtration & Contamination on fuel systems. Learn more below: