What is a Confined Space?

In robotics, a confined space is an enclosed area with limited access and/or limited room for maneuverability. In this context, “limited” means that a human cannot easily transport the robotic system into the area and set it up in a repeatable way. Some examples of confined spaces include pipes, storage tanks and fluid transportation tankers. These areas are frequently too small for a human to enter or, at the very least, are uncomfortable environments for working. While some spaces, such as pipes, may have uniform geometry, many, such as ship ballast tanks, have complex and unpredictable shapes with a wide range of ribs, curves, and elevated entryways. Despite the difficulty of working in these types of spaces, these surfaces must still be cleaned, painted and maintained like any other industrial area. As a result, workers must wear protective gear and squeeze into places that were not designed with human workers in mind.

Traditional confined space inspection systems such as quadcopters, treaded robots, or articulated robots that crawl like snakes are also limited in what they can accomplish. Because these systems are not anchored, they are largely limited to inspection and light surface processing tasks. For example, try to visualize a snake robot trying to use a drill or a quadcopter with a pressure washer; it is quickly apparent that these systems will be unstable when carrying out a process with a significant reaction force. Systems with tracks are typically more stable, but they rely on their weight, and possibly magnetic tracks, to keep from shifting under process loads – these may not be viable in confined spaces.

Trying to properly anchor any robotic system in a confined space is difficult because frequently there are not consistent features with which to anchor. This means that a confined space robot must interact with its environment to stabilize itself. The problem is further complicated by the constraint of time. Even if a system is mobile and can self-stabilize, it must still be able to carry out a process in a reasonable amount of time. A system that must reposition and lock itself down hundreds of times to finish a process will likely have difficulty finishing a task fast enough to be practical.

SwRI’s research worked with a physical mockup of a complex confined space to rapidly iterate through simple prototypes and better understand the pros and cons of different approaches to mobility, anchoring and tool motion. The final concept, the AMC, acts as a self-anchoring gantry, combining a high level of mobility with the capacity to lock in position to conduct useful work. 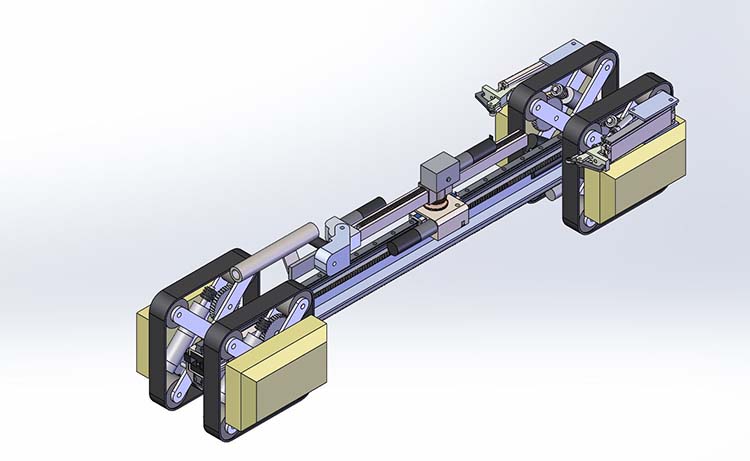 SwRI’s AMC features a gantry system and compact tread units located at either end of the system. The tread units are designed to be driven on both the front and bottom of surfaces. Navigating raised obstacles uses a novel controlled transfer approach that keeps the center of gravity near the sill of the obstacle during motion. This would enable the robot to perform complex tasks with high forces.

SwRI built a test fixture, left, with 18-inch-diameter, round hatchways. A 3D model of the fixture, right, depicts the AMC robot inside the confined space.