What is a cobot and does my company need one?

Collaborative robot, or cobot, has become something of a buzzword in the automation industry. The popularity of cobots has created an explosion of new models from all the major robot manufacturers as well as many industry newcomers. If you are new to the field, it can be challenging to know which model to pick or even determine if a cobot is the right solution.

In this series of articles, the Innovations in Automation Blog explores insights Southwest Research Institute has gained over many years of working with cobots. Our goal is to help you navigate the cobot market and determine if this technology can help solve your problems. Cobots are not the right solution in all cases, but they do allow robots to work in situations where it was previously infeasible to use a robot. This opens new applications and advances the field of automation across the board. 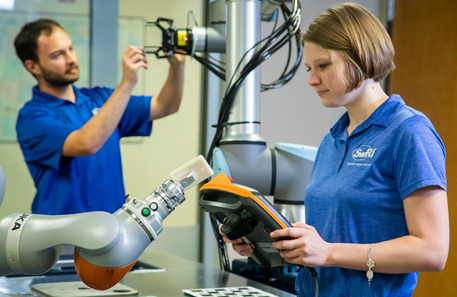 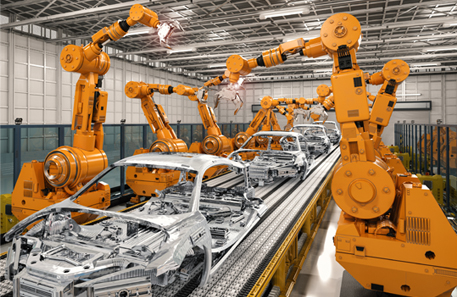 Collaborative robots are fundamentally industrial robots designed to work near humans. Industrial robots are multi-axis manipulators used across a wide range of industry for tasks from welding to painting to material handling. Traditional robots are isolated from humans by cages with complex safety systems in place to ensure that workers cannot be injured while the robot is moving. This is essential because a traditional robot is a heavy piece of machinery moving at high speeds. Without a safety system in place, it can easily injure or kill someone if they accidentally move into its path. With enough safety measures, it is possible to incorporate most traditional industrial robots into a system which is safe for work near humans. The keyword here is system, as it is the safety system that makes the robot safe, not any properties of the robot itself. Designing these safety systems for traditional robots takes a great deal of effort and tends to be custom tailored for every application.

With cobots, the robot is designed to be safe and nearly ready to use near humans out of the box without this extra effort. Cobot designs tend to avoid sharp edges and pinch points and limit force and speed to reduce the chance of injury. This allows humans to work safely and effectively in the same space as the cobot.

For a robot to be inherently collaborative it must be designed from the ground up with built-in safety features to prevent worker injury. Most cobots are designed to come out of the box with force limits in every joint. This means the cobot can detect if it has collided with something and will immediately stop. Cobots also limit how hard they can hit someone by reducing their overall momentum compared to traditional robots. Their components are typically lighter, and they move at slower speeds than traditional robots. This makes cobots safe at the expense of speed and payload. As an example, payloads for cobots typically range from 5 kg (11 pounds) to 11 kg (24 pounds) while payloads for traditional robots can exceed 1,000 kg, about the weight of a compact car. Payloads for cobots have steadily increased over the years in response to industry demand, but it is difficult for a robot to be simultaneously very large and very safe. For more information on cobot safety, check out the next post in this series where we take a deeper dive into the subject.

Cobots can be used in a wide range of applications ranging from education to industrial material handling. The market for cobots has been expanding rapidly and is expected to grow by more than 50% in the next five years and ultimately represent nearly one-third of the entire industrial robot market. Ongoing automation trends are expected to strengthen interest across several applications such as:

We will cover this topic in more detail in our post on cobots vs robots.

Because cobots are intended to work with people, they are often designed to be easier to use for simpler tasks than traditional robots. Traditional robots are designed with expert users in mind, while cobots are frequently designed under the assumption the operator is not a robotics expert. The cobot user interface, or teach pendant, is frequently a large touchscreen which can be navigated with relatively little instruction. This is a departure from the complex, button-based interfaces used in traditional robotics and dramatically reduces the time it takes for a worker to gain proficiency. This simplicity comes at the expense of reduced functionality compared to traditional teach pendants. Those buttons are there for a reason after all, but for many tasks, this is not a limitation. 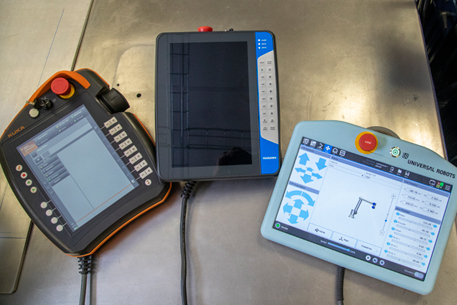 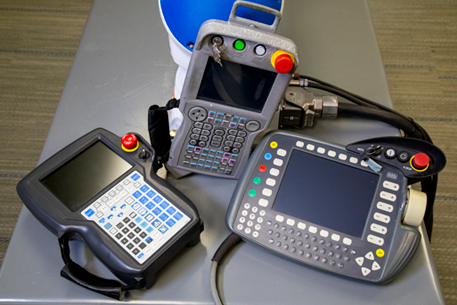 Another way cobots improve usability is the inclusion of a “teach by doing” mode, which allows the cobot to be physically maneuvered around the workspace to teach process points. This makes programing the cobot easier and quicker than a traditional robot in which every motion must be controlled by the teach pendant. In a cobot, the motion can be controlled through physical positioning and then fine-tuned on the teach pendant as needed.

Want to know more about cobots?

Cobots can be a great tool in any robotics arsenal, but it is important to realize they aren't a silver bullet for every safety or training related robotics challenge. They have lower speeds and payloads than traditional robots and are therefore limited in the roles they can fill.

For more information, watch a webinar on Cobots in Industry, visit our Collaborative Robot Laboratory, and stay tuned for other articles in this series, including: