The A-10 Thunderbolt II, commonly called the Warthog, is an aerial workhorse that’s been a mainstay of the U.S. close-air support mission since it entered military service in the mid-1970s. Since then it’s seen action from the Middle East and Afghanistan to Grenada and the Balkans. Essentially built around a 30-mm, seven-barrel rotary cannon, the A-10 originally was designed to protect ground troops from tanks and light armored vehicles. Unlike other modern fighters, it flies neither fast nor high, but was built to survive battle damage and return its pilot safely home. The A-10 can take off and land on short, unimproved airstrips. It features redundant hydraulics and engine and flight controls, and the pilot is protected by a 1,200-pound “bathtub” of titanium armor.

Being heavy, slow, and decidedly ungraceful, Warthogs have limited usefulness outside of this military combat role. That is, unless you’re looking for a suitable ride for flying into a thunderstorm. And that is exactly what a team of weather researchers has in mind. Working with a commercial client on a National Science Foundation-funded program, engineers in the Defense and Intelligence Solutions Division at Southwest Research Institute (SwRI) helped to modify a mothballed A-10C into an aerial laboratory to help scientists research and better understand the life cycles of violent storms as well as improve tornado prediction. 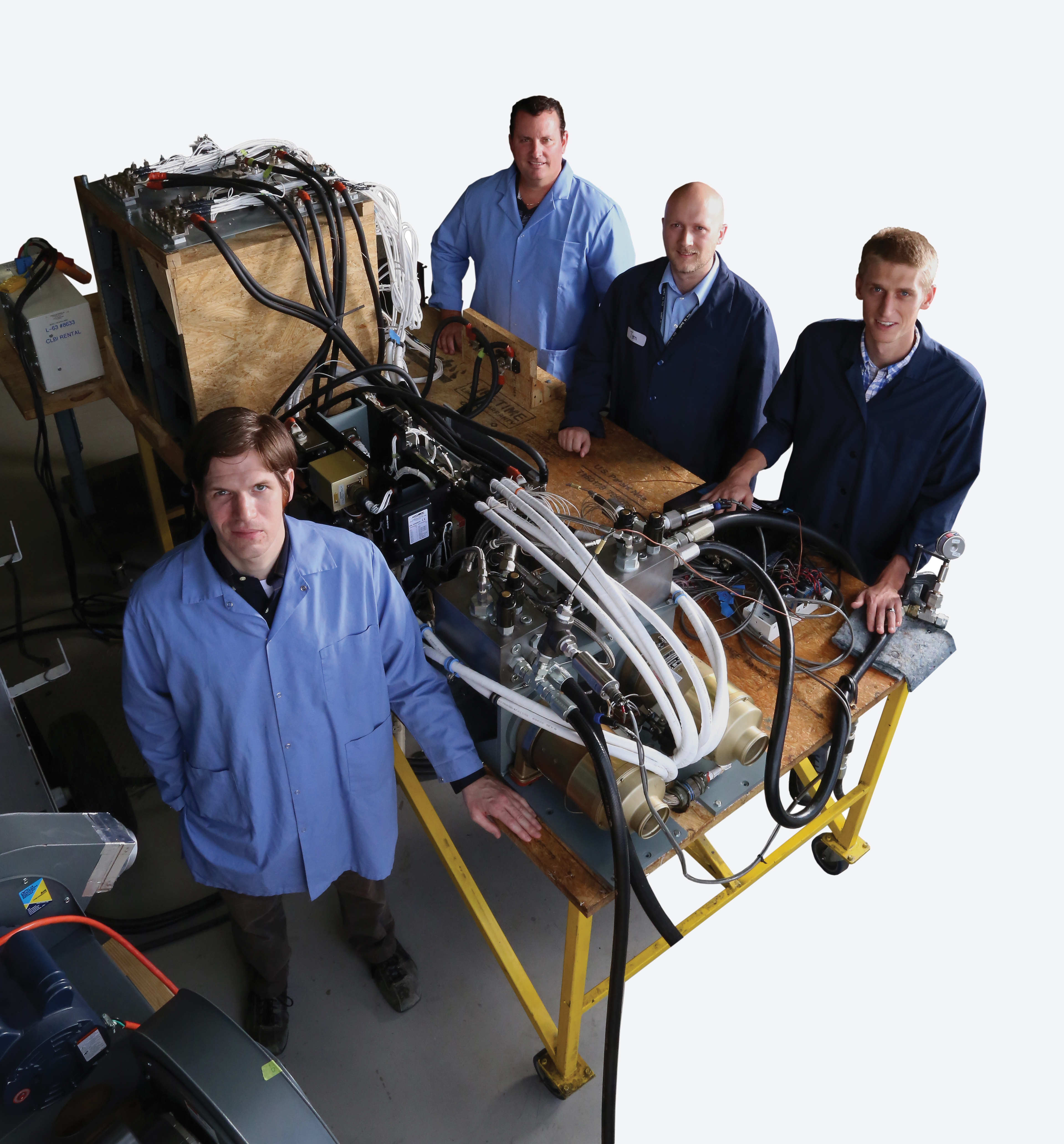 ABOUT THE AUTHORS
A team of SwRI engineers  — (left to right) Mike Rafferty, Daniel Broesche, Barney Tannahill, and Jordan Nielson —  designed a new power system that turned a mothballed A-10 Warthog into a Weatherhog storm-chasing aircraft. The dual, independent power systems ultimately will run a suite of scientific meteorology equipment without interfering with the aircraft’s existing power generation systems

The SwRI team designed a new power system to run a suite of scientific meteorology equipment without interfering with the aircraft’s existing power generation systems. Finding room for the dual-power system was relatively easy: Take out the GAU-8 cannon and its ammunition, and you save 4,000 pounds and create four-by-eight feet of usable space. Into that space goes a peacetime payload of standard laboratory instrumentation the plane will take into a whole new world of hazardous duty — violent thunderstorms in the U.S. and around the world.

The A-10’s rugged design and reinforced armor plating made it a perfect fit for its new role in the Storm Penetrating Aircraft (SPA) project. It replaces a Korean War-vintage, propeller-powered T-28 trainer that was retired in 2005 after 35 years of storm chasing. In flight, the A-10 is a much more capable aircraft for in-situ storm research. The T-28 had a ceiling of about 18,000 feet; the A-10 can fly more than twice as high, and with a larger payload.

SwRI researchers were able to find generators that could fit inside the cannon’s former home and supply enough electricity to power the weather research instruments. The hydraulic supply that once powered the gun now powers the SwRI- installed generators. Using hydraulics to power onboard instrumentation is what makes this installation unique. Typically, an aircraft has a hydraulic generator only as a backup in the event the primary electrical system fails. However, because the primary weapon system was driven by hydraulics, SwRI engineers were able to tap into that configuration to power the research equipment.

It was crucial that the hydraulically powered auxiliary power systems be independent of the plane’s own electrical system, which relies on generators powered by the turbofan engines. That way, the scientific equipment doesn’t draw power away from any flight-critical systems. If either or both of the auxiliary generators fail, the plane will still fly. While an auxiliary power failure likely would restrict some research, the pilot could still land safely. 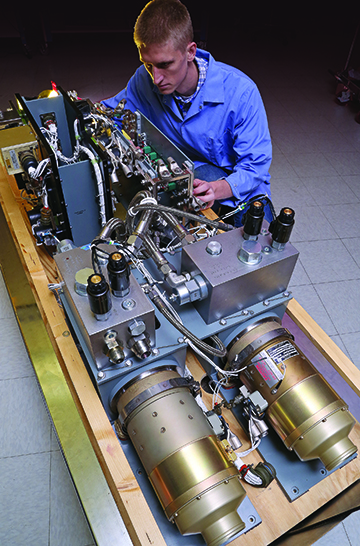 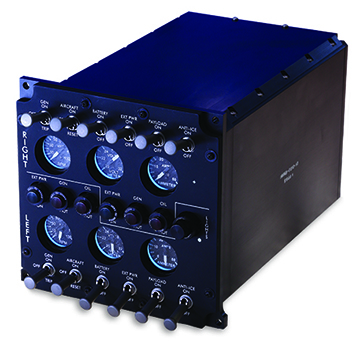 Left: SwRI engineers designed a new  power system to  run meteorology instruments for the A-10’s new storm- chasing mission.  The package was designed to fit the 4x8-foot space left when the  aircraft’s cannon  and ammunition  were removed  from the nose of  the aircraft.

Above: This control panel allows the pilot to operate dual power systems from the cockpit. This design provides more flexibility to choose which scientific instruments should be turned on or off during severe thunderstorms.

One of the bigger challenges was installing a power system in the place of the aircraft gun system while balancing system-operating requirements — hydraulic, electrical, and cooling. The SwRI team approached the project as a single unit with dual independent power supplies. The advantage of this design was to use both hydraulic supplies, one from each engine, to drive each power supply. Each engine-driven hydraulic pump can deliver a rate of 40 gallons per minute (GPM) sustained flow at 3,000 psi. To power the new systems and still maintain existing aircraft hydraulic systems, the team could use up to 20 GPM for the power supplies. The team picked a motor with enough power and large displacement to achieve the 20 GPM target needed during normal operations. The hydraulic system spins the generator that sends the electricity out for distribution to the connected equipment. Each power system can produce both AC and DC current and provides 350 amps steady-state and 400 amps at peak, at 28 volts of DC electricity. Each side has a set of inverters for AC power that can pull 65 to 68 amps at 115 volts AC of 60Hz electricity.

When the plane is on the ground, the system needs to be able to cool itself to avoid overheating. This was accomplished using existing fans on the generators connected to external ducts to draw in cool air. However, when cruising at altitudes up to 40,000 feet, where outside temperatures are as low as minus 40 F, the generator and hydraulic motors generate heat to offset the external temperatures.

Designing the control loop for the hydraulic motors was another engineering challenge. The system controls the motor, which powers the generator. During operation, the generator’s electrical load varies depending on which instruments are in use. A spring-loaded mechanical flow valve that controls the hydraulic motor caused unacceptable oscillations of +/- 4,000 RPM. Smaller control valves to minimize the oscillations were tried, but those limited the motor’s power output. Ultimately, SwRI engineers installed an electronic controller programmed to maintain a constant RPM and still meet the generator’s peak operat-ing requirements.

Meanwhile, researchers from SwRI’s Engine, Emissions, and Vehicle Research Division assisted with a pressure problem on the hydraulic motor seals. The hydraulic motors, which run between 7,500 and 9,000 RPM, have a seal on their shaft designed to endure about 70 pounds per square inch (psi) of pressure. The A-10’s hydraulic system accumulators, however, never allow the back pressure to fall below 70 psi. To compensate, the SwRI team built a suitably rated face seal on a separate outside shaft to relieve pressure on the motor seal.

Removing the Warthog’s two-ton primary weapon system created an issue that aerospace engineers rarely have to deal with — adding weight to maintain the plane’s aerodynamics. The A-10’s cannon and ammunition were stored forward of the wing. That means that for the “Weatherhog” A-10 to not be tail-heavy in flight, its center of gravity must match that of its military siblings. The two hydraulic genera-tors together weigh roughly the same as the 620-pound cannon that was removed. However, the weight of the scientific payload doesn’t come close to matching the Warthog’s bulky ammunition load. SwRI engineers installed ballast to compensate for some of that weight loss. Additional ballast can be added later depending on the weight of other instrumentation packages to be installed.

Because flight testing wasn’t possible during the project, all mechanical and electrical issues had to be resolved on the ground. For this reason, the system design had to be more complex with redundant and backup features to ensure the systems are safe once in the air. Engineers in SwRI’s Mechanical Engineering Division provided space and equipment to conduct some of the final testing. This allowed the team to resolve the pulsation problem in the hydraulic control system and to conduct structural analysis of the new framing and mounts that support the dual power systems. They also analyzed force and shear strength data and verified that the system would remain structurally sound during flight.

All that remains is for the A-10 SPA “Weatherhog” to spread its stubby wings and point its blunt nose into a suitably threatening sky.