Medication noncompliance is an extremely common public health issue, affecting as many as 40% to 50% of patients prescribed medications to manage chronic conditions such as diabetes or hypertension. This nonadherence to prescribed treatment is thought to cause at least 100,000 preventable deaths and $100 billion in preventable medical costs every year. Barriers to medical adherence range from lack of motivation to complexity of treatments to unpleasant side effects and inconvenience.

The medical community has been investigating the controlled release of pharmaceuticals for decades to address some of these issues. Using medicinal chemistry and proper formulation, chemists can control the release of orally administered drugs, creating more feasible once-a-day or once-a-week dosing options. However, all oral dosage forms — tablets, capsules and liquids — still experience cyclic high and low blood concentrations depending on the time from the last dose, where highs can result in side effects and lows impair clinical results. These swings are particularly problematic over longer treatment durations. 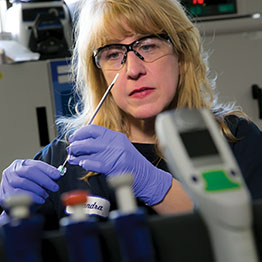 Some orally delivered drugs, for example, degraded by the harsh acidic environment in the stomach, can be coated to protect the active ingredients until they enter the lower digestive system, where the coatings then degrade in a neutral pH environment and release the drugs where they can be safely absorbed. Another common issue related to oral drug delivery is the need to maintain drug-blood concentrations in the therapeutic window, a narrow “sweet spot” of efficacy and safety, requiring several doses per day.

One solution that can address all these problems is a drug-eluting implant that can provide months to years of sustained, nonfluctuating release. Over the past 20 years, Southwest Research Institute has been developing subdermal drug-eluting implants for a variety of applications. SwRI has developed a flexible platform produced by hot melt extrusion where the drug or active ingredient is mixed with a binder and then extruded in a rod-like format that can be inserted just below the skin. Drug-eluting implants offer efficient, effective controlled release of pharmaceuticals with compliance assured.

In addition to offering several advantages over more conventional treatments, implantable devices allow site-specific drug administration, delivering a drug where it is most needed. For example, implants to treat brain tumors or prostate cancer in situ could significantly lower doses of a drug necessary while minimizing potential side effects. 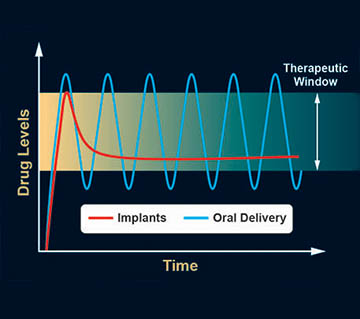 An oral delivery drug will typically be dissolved in a few minutes but may take a few hours to reach therapeutic levels in the bloodstream. After the peak concentration is reached, the drug will slowly get broken down by metabolic processes, and blood levels will fall out of the therapeutic window. Properly formulated subdermal implants can offer sustained, controlled, nonfluctuating release within the therapeutic window.

Hot melt extrusion processes heat and mix a drug or active ingredient with a binder, which is then extruded in a long strand, cooled and cut into a rod-like format that can be inserted just below the skin.

Implantable devices also allow sustained release of drugs, avoiding the peaks and valleys in drug levels. An implant typically releases an initial burst of the drug and thereafter maintains blood levels of the drug at constant concentrations. They maintain the effective therapeutic range while minimizing side effects that are associated with transient high levels. In addition, implants typically require less of the drug to maintain a therapeutic dose because the compound is released directly into the tissues and is absorbed into the bloodstream without having to pass through the digestive system, potentially reducing undesirable side effects.

Drug-eluting implants also offer the advantage of improved bioavailability. In pharmacology, bioavailability is the fraction of an administered drug that is absorbed and reaches the circulatory system. For example, when a medication is delivered intravenously, it has 100% bioavailability. Poor water solubility affects up to 40% of potentially valuable drug candidates. Drugs administered through implants are better absorbed, requiring lower dosages and improving bioavailability.

But perhaps the most important advantage of drug-eluting implants is patient compliance. An implant releases a continuous level of medication, overcoming intentional and unintentional nonadherence, both of which lead to substantial advancement of disease, increased healthcare costs and higher risk of death.

A trocar is a cannular medical instrument that functions as a portal for the subsequent placement of other devices, such as surgical instruments or drug implants.

Trained medical staff place the flexible, rod-like devices beneath the skin using a trocar surgical instrument in a simple outpatient procedure under a local anesthetic. Multiple rods may be implanted into an individual patient’s upper arm or alternative location depending on the dose required.

A gravimetric feeder is a self-calibrating system that determines the amount of material to be dosed by weight.

SwRI produces implants in a Current Good Manufacturing Practice (CGMP)-compliant ISO 7, class 10,000 clean room. Gravimetric feeders supply the active ingredient or drug and a binder, typically a polymer, into the extruder. The resulting strand is then collected on a conveyor belt while cooling. The strands are cut to the appropriate length, washed, weighed, packaged and sterilized. After quality control inspections and delivery to our clients and other research collaborators, they are used in Food and Drug Administration clinical trials.

Existing and developing therapeutic areas for drug-eluting implants include opioid addiction, Parkinson’s disease, thyroid insufficiency, birth control, antivirals and malaria as well as veterinary applications. SwRI has worked with a variety of clients to address public health problems to overcome treatment-specific challenges using drug-eluting implants. For example, in 2018, over 46,000 Americans died of opioid-related overdoses. Patients with opioid dependence find that medication-assisted therapies — such as daily methadone or buprenorphine — reduce withdrawal symptoms while controlling cravings. SwRI has helped develop an FDA-approved buprenorphine-releasing implant that can provide up to six months of a constant level of drug therapy. This alleviates the need for daily dosing or visits to drug treatment facilities, which greatly improves compliance and quality of life during recovery. 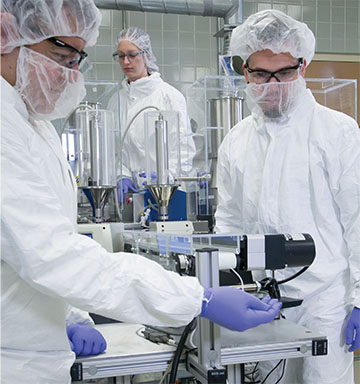 SwRI uses a hot melt process in a CGMP-compliant cleanroom to produce drug-eluting platforms. The active ingredient and a polymer are combined and extruded in a thin tube that is cut into matchstick-sized subdermal implants. 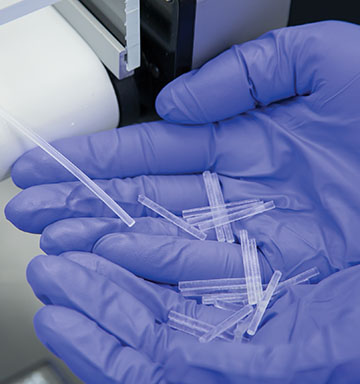 These rods can be inserted just below the skin for convenient, consistent dosing over extended periods of time. 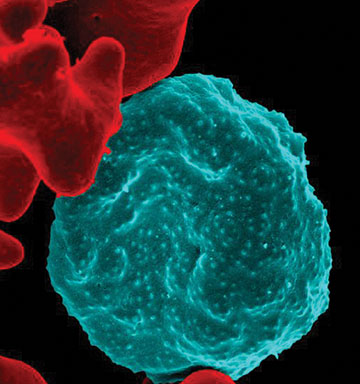 SwRI is developing and testing antimalarial implants to prevent the deadly mosquito-borne parasitic disease. This colorized scanning electron micrograph shows the rough surface of a blood cell infected with the parasite in blue in contrast to uninfected cells with a smooth red surface.

SwRI is also researching implantable drug delivery formulations for chemoprophylactics to prevent malaria. Malaria kills over 400,000 people per year. United States armed service personnel are often deployed to malaria-endemic regions and are at risk for contracting the deadly disease. Currently, the prevention of malaria involves the use of a variety of drugs taken before, during and after travel, with many significant side effects including nausea, vomiting, abdominal pain, headache, insomnia, dizziness, loss of balance and ringing in the ears. As a result, compliance is an issue, with many either skipping doses or stopping the medication too early. Successful military operations in malaria-endemic regions often require daily supervised administration to ensure service members take their medications. If these drugs could be delivered by an implant, compliance would be assured. Another scenario where implants would be advantageous is when special forces are deployed under conditions that make it difficult if not impossible to administer a daily supply of the medications over long periods in austere conditions. Having the drug automatically delivered over extended periods of time is of great interest to the U.S. Department of Defense.

In collaboration with the Experimental Therapeutics Branch at the Walter Reed Army Institute of Research, SwRI produced drug-eluting implants to prevent malaria infection. Our military collaborators implanted matchstick-sized rods containing a widely used malaria protection drug in mice and monitored blood levels of the compound over eight weeks. The drug was released in a consistent and steady manner. By comparison, the half-life of an oral dose of the same medication is approximately two to three days in mice. To demonstrate that these blood levels protected the mice from infection, they were exposed to malaria 12 weeks after implant insertion and were compared to a control group without the implant. The unprotected mice all acquired malaria, while the treated mice all avoided infection.

The best applications for the drug-eluting implants are lower-dosage, longer-term treatments with compounds that are not too water-soluble. Continuous, subcutaneous administration of therapies offers many advantages, including increased compliance, optimum therapeutic levels to curb side effects and a convenient treatment regime that offers a better quality of life for patients. SwRI continues to help collaborators and clients formulate drug-eluting platforms that can be implanted and essentially forgotten, while ensuring effortless, efficient and effective treatment for a range of chronic conditions or continuous protection against disease.