NASA has funded a five-year outreach program in association with the Polarimeter to UNify the Corona and Heliosphere (PUNCH), a solar mission led by Southwest Research Institute. The PUNCH Outreach Program, also led by SwRI, is collaborating with five planetariums and science centers in four states, plus other multicultural partners in the southwestern United States. The mission has also achieved an important milestone, passing its latest NASA review and entering the final mission design phase with a new launch-readiness target of October 2023.

For national impact, the outreach team is forging strong connections with NASA-sponsored educational programs and with other solar missions, including the Parker Solar Probe (PSP). Working with PUNCH and PSP scientists, the team will develop a suite of enduring products and events using an “Ancient and Modern Sun-Watching” theme.

“There is worldwide evidence that all humans are descended from Sun-watching cultures,” explains PUNCH Outreach Director Dr. Cherilynn Morrow, who consults for SwRI. “Our theme portrays NASA’s exploration of the Sun as a natural extension of humanity’s long-lived dedication to observing the Sun’s rhythms and mysteries. In this way, we can reveal how NASA science is relevant to the cultural history of diverse peoples.”

When PUNCH launches in 2023, it will increase the understanding of the Sun’s corona — the outer atmosphere that becomes visible during total solar eclipses. The mission will study how the corona transitions to the “solar wind” with charged particles and magnetic fields speeding outward from the Sun, filling our solar system and interacting with the planets.

“PUNCH cameras are uniquely capable of imaging the solar wind continuously from the time it leaves the Sun until it engulfs our world, affecting spacecraft and astronauts and causing auroral lights,” said Principal Investigator Dr. Craig DeForest of SwRI’s Space Science and Engineering Division. “This Sun-Earth connection offers pathways for sharing our science more broadly. I am so pleased with the capability of our outreach team and the inclusivity of our outreach program.”

The program’s motto is “shining a new light on diverse views of the Sun,” be they scientific, artistic, cross-cultural, historic or the result of first-person observations. The team will also use solar eclipses visible from the U.S. in 2023 and 2024 to help motivate public engagement in multicultural, arts-integrated opportunities for learning about NASA-related science, technology, engineering and mathematics (STEM).

PUNCH Outreach draws particular inspiration from Chaco Canyon, a cross-cultural site in the New Mexico high desert where a total solar eclipse in 1097 may have been recorded as rock art and where examples of age-old Sun-watching practices are abundant. Chaco includes thousand-year-old remnants of monumental architecture built by Ancestral Puebloan people and oriented in accordance with their knowledge about the movements of the Sun and Moon. The history of Chaco also interweaves with that of the Navajo people as well as the indigenous peoples of Mexico and Central America.

“This project’s emphasis on ancestral connections to Chaco Canyon can provide a valuable way for our youth at Acoma and Laguna Pueblos to experience NASA science and envision a future career in science without losing touch with their culture,” said PUNCH outreach partner Joe Aragon, a retired STEM educator and tribal elder from the Acoma Pueblo in New Mexico.

PUNCH Outreach emphasizes collaboration with diverse partners to engage populations that are currently underrepresented in STEM fields. The program intends to benefit and learn from Native American and Hispanic youth and their families, Girl Scouts pursuing STEM-related patches and badges, and blind or visually impaired learners.

“Our science team is really excited about contributing to the outreach effort,” said PUNCH Project Scientist Dr. Sarah Gibson of the High-Altitude Observatory in Boulder, Colorado. “We have a high percentage of women scientists compared to other NASA missions and this makes us a great source of role models to support our STEM collaborations with Girl Scout Councils.”

In addition to developing live-interaction planetarium shows with musical, kinesthetic and social learning dimensions, PUNCH Outreach is consulting with Jeff Killebrew, a science teacher at the New Mexico School for the Blind and Visually Impaired, to translate dramatic solar events into meaningful tactile experiences.

To implement the PUNCH Outreach Program, SwRI is collaborating with the Fiske Planetarium at the University of Colorado in Boulder, the Clark Planetarium in Salt Lake City, the New Mexico Museum of Natural History and Science and the National Hispanic Cultural Center in Albuquerque, the New Mexico Museum of Space History in Alamogordo and the Lowell Observatory in Flagstaff, Arizona.

NASA’s Small Explorers program provides frequent flight opportunities for world-class scientific investigations such as PUNCH. SwRI is building and will operate the spacecraft. PUNCH instruments are being built by SwRI, the U.S. Naval Research Laboratory and RAL Space in England. 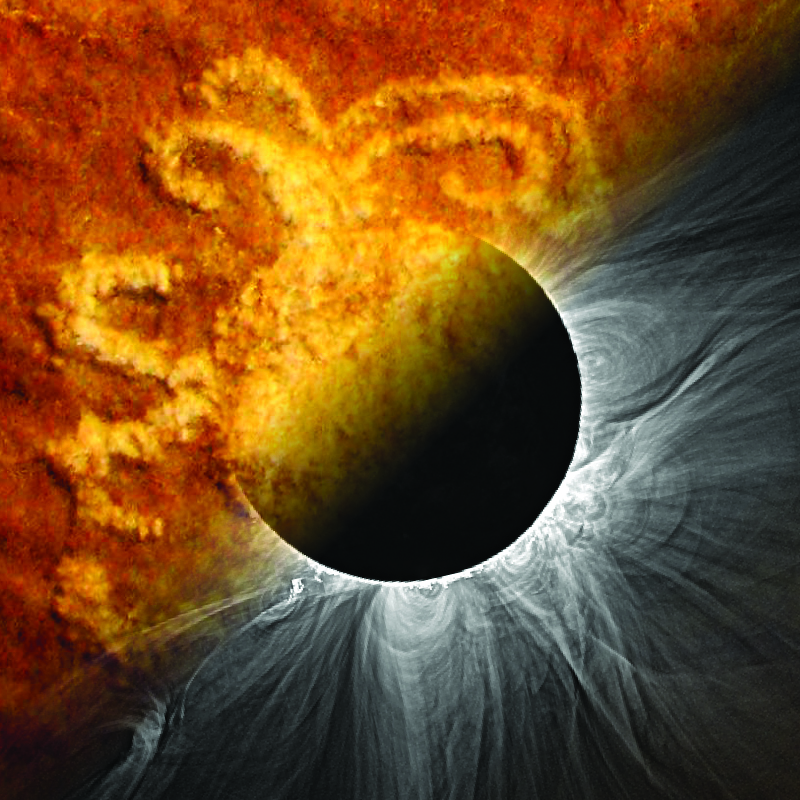 This composite image represents the Ancient and Modern Sun-Watching theme of the SwRI-led PUNCH Outreach program. The image combines an Ancestral Puebloan petroglyph from Chaco Canyon, interpreted by solar astronomers as the 1097 total solar eclipse with an active solar corona (upper left), with a high-resolution observation of the 2013 solar eclipse (lower right).