This video provides a brief introduction to using NESSUS. It is intended to help new users get started setting up and solving problems.

The first step when performing a probabilisitc analysis is formulating the problem, and this is sometimes the most difficult part of the process. This tutorial introduces the concept of a limit state, which is fundamental to the formulation of a probabilistic analysis.

Probabilisitc analysis is concerned with assessing the probability that a design will satisfy one or more performance criteria. It is up to the analyst to formulate what constitutes acceptable performance, or conversely failure, for the design under consideration. For example, one may want to determine the probability that the maximum stress developed in a component under loading exceeds the yield stress of the material.

Most formulations of what constitutes failure have two components: a capacity (also referred to as a resistance), commonly denoted R, and a load, denoted S. Failure is then defined as occurring when the load exceeds the capacity: S > R. Note that both the load and the capacity may be random quantities. Further, the load and/or capacity may be expressed as a functional relationship to a set of design parameters, Xi. For example, the maximum stress in a cantilever beam will be a function of the geometry parameters, the modulus of elasticity, and the applied load: these design parameters are referred to as the basic random variables. 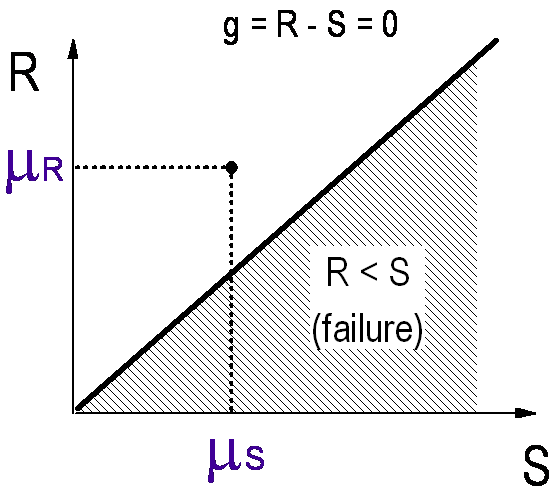 Mean values of the random variables located in the safe region

For more complicated problems, often the load is not a basic random variable, but it is a function of other basic variables. For example, consider a cantilever beam, where the failure condition is defined in terms of maximum stress. In this case, the basic random variables may include geometry parameters, modulus of elasticity, and applied force. This is simply an extension of the basic R − S formulation. We simply start with Z = R − S = 0 and replace the load S with a functional relationship, say g1, among the basic variables:
Z = R − g1(X1,X2,X3) = 0.

The limit state concept allows any failure definition to be expressed in a unified manner: