The presence of low-speed pre-ignition is considered a major impediment to automobile manufacturers' efforts to aggressively downsize engines to reduce carbon dioxide emissions.

"This is a substantial development because it has the potential to affect every original equipment manufacturer (OEM). We have demonstrated that our HEDGE technology, primarily the use of cooled EGR, successfully suppresses low-speed pre-ignition events and in a way that improves fuel economy," said Dr. Terry Alger, manager of the Advanced Combustion and Emissions Section in SwRI's Engine, Emissions and Vehicle Research Division. "This problem was important enough to the automotive industry that SwRI chose to fund the work internally through our internal research and development program," Alger added.

The causes of low-speed pre-ignition events are not completely understood. They are random, infrequent occurrences that happen at low speed and high torque, Alger said. Under these conditions, a pre-ignition event leads to very heavy knock, which can cause catastrophic damage in only a few engine cycles.

Cooled EGR and its supporting technologies for high efficiency are being investigated in SwRI's HEDGE II consortium. HEDGE II is in the second year of a cooperative research consortium aimed at developing a high-efficiency gasoline engine for both light-duty automotive, medium-duty and heavy-duty markets. This four-year program expands on earlier efforts to improve gasoline engine technology for future emissions and fuel economy requirements.

The first HEDGE consortium focused on high levels of EGR combined with supporting technologies such as advanced ignition systems and advanced boosting technology to develop strategies for high efficiency.

"What we were able to accomplish through the first HEDGE consortium showed we could significantly improve gasoline engine performance and efficiency," Alger said. "Not only were we able to decrease fuel consumption, but we were also able to lower emissions significantly." SwRI engineers have been working on low-speed pre-ignition suppression internally for the past year.

"It is another significant step forward in developing an aggressive knock mitigation strategy," Alger said. "Our internally funded work has also looked into the fuel's effect on pre-ignition as well as potential non-EGR hardware and control solutions, but our first goal was to show how our cooled EGR technology suppresses the phenomenon."

SwRI also is working on examining lubricant effects on LSPI and expects to begin a separate consortium on the topic to develop new lubricants and lubricant testing methods.

HEDGE II consortium members represent the transportation industry in Asia, Europe and the United States. They are from a broad industry cross section, including light, heavy-duty and off-road engine manufacturers, component suppliers and oil and fuel companies. There are 23 members of the consortium, including most major automotive manufacturers.

"We will continue to develop these concepts that were initiated in the first HEDGE program and further develop the supporting technologies to implement this strategy in modern engines," Alger said. "We are already seeing concepts developed in HEDGE I enter production."

As an independent R&D laboratory, SwRI has extensive experience in managing consortia. Since 1991, a separate Clean Diesel consortium has conducted research in low-emission diesel engines with as many as 46 member companies worldwide. 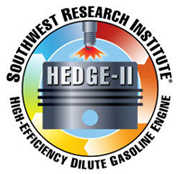