The Volatiles Analyzer and Prospector (VAPORR) is an SwRI-developed instrument intended to support near-term NASA Discovery and commercial missions to the Moon, as well as long-term missions aimed at demonstrating broader objectives in support of mobile or stationary in-situ resource utilization plants. The VAPORR device is comprised of different subsystems that are designed to measure what types of volatiles are present in lunar soil. This instrument will then inform in-situ resource utilization plants how to exploit and utilize the resources found in the regolith. 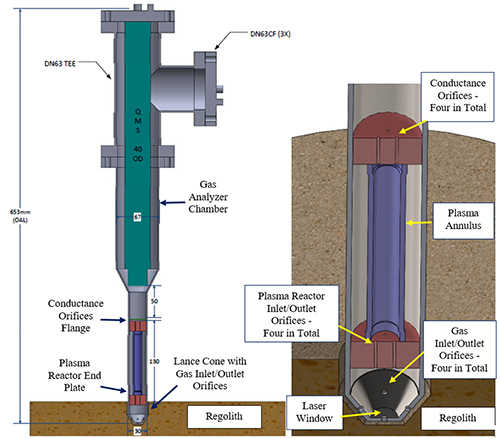 A three-dimensional rendering of the VAPORR probe showing the different subsystems used to measure the volatiles present in lunar soil. 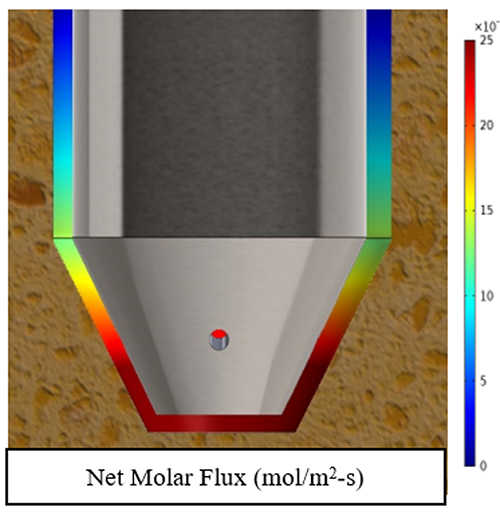 The molecular flow analysis results indicate that the VAPORR instrument is successful at feeding the vapor flow generated from the regolith into the device for further analysis.

An internally-funded SwRI project to validate the functionality of VAPORR’s subsystems as a fully integrated system was undertaken in 2020, with the objective of determining the critical gas flow pathways and flow patterns for the VAPORR instrument as it interacts with the lunar regolith using a computational molecular flow analysis.

SwRI engineers have extensive experience in using and customizing both commercial and SwRI-developed CFD codes to meet the needs of clients in the oil and gas industry, space science, medical community, food processing, environmental agencies, and nuclear regulatory commission.

To evaluate VAPORR, SwRI utilized a molecular flow computational analysis of the vapor flow generated from the regolith feeding back into the VAPORR instrument and into the internal flow pathways. A three-dimensional solid model of the probe was generated based on provided design criteria, where the fluid domain was extracted and imported into the solver for meshing and solver setup with the desired flow and lunar environmental conditions.

Results indicated that the efficiency of the probe is primarily geometrically driven. Current simulation results provide guidance on the performance of the VAPORR instrument at capturing gas that is emitted off the regolith. In addition, the results can be used as a benchmark for future probe design tradeoff studies.