Taking on the task of deploying a custom robotic workcell can be daunting for the most seasoned robotics engineers, let alone teams that don’t use robots on a daily basis. This is reflected in what we hear from industry peers, customers, integrators, and collaborators. They want to understand what is happening inside the custom software we create. This would allow the integration team members, who are often not software developers, to understand how a system functions and aid in debugging issues during integration and deployment.

Typically, the integration team is looking for more information than a human-machine interface (HMI) can provide, but the software debugging tools used by developers are not easy to learn. Our customers need a solution that provides the same information from the developers’ tools and is as accessible and intuitive as an HMI.

Problem solved! SwRI developed a web-based user interface (UI) that enables engineers and operators in the field to access detailed information about the robotic system. This webpage is hosted on the computer that runs the robot system, which means it has access to the robot’s internal streams of data. Other devices (PCs, tablets, smartphones) on the network can open this UI the same way any other webpage is opened, by going to its web address. 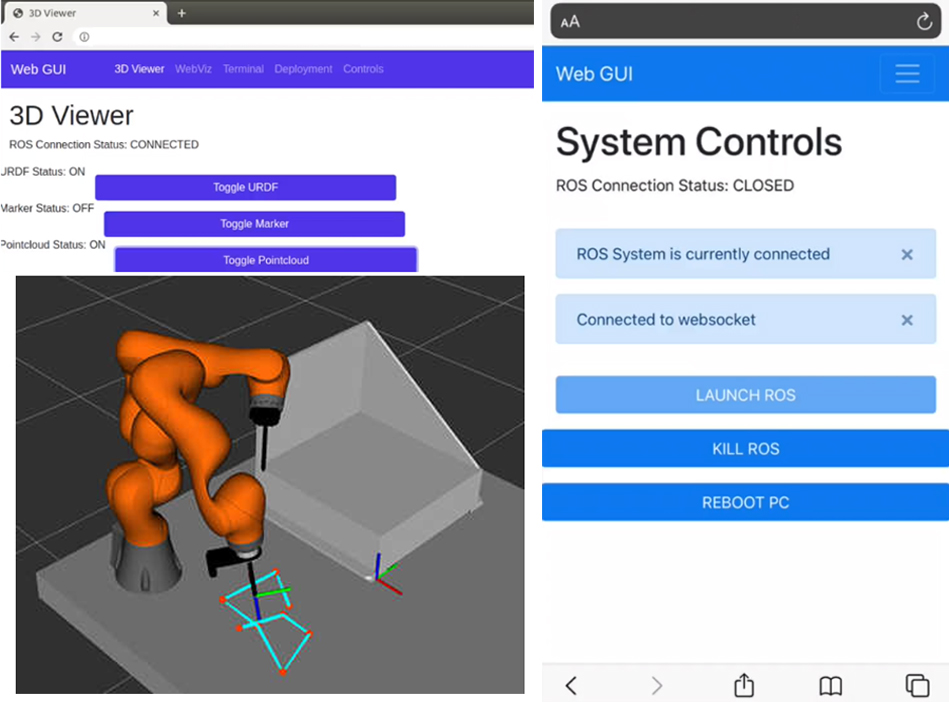 Once the UI has been opened, users can navigate to several different tools. One of these is an interactive 3D representation of the robot and its environment which can be used to visualize the workcell. This 3D viewer can include components such as robot models and live streams of point cloud data that display what the robot is seeing. Other capabilities include high-level system controls which can perform operations like starting and stopping the system, as well as a set of deployment tools for managing various versions of software. This is accomplished by leveraging the open-source RobotWebTools library.

Additionally, the custom UI provides links to other open-source web tools, such as Webviz and the TTYD terminal emulator. These types of powerful web tools enable a user to monitor and interact with the software system at finer levels of detail.

Getting web-based robot status information in the hands of the implementation team has proven to streamline the amount of time needed to integrate robots in an operational environment. Ultimately, this approach supports reducing the cost for integration and implementation, getting robots fielded more quickly for a wider range of new applications.