Southwest Research Institute (SwRI) has successfully demonstrated that a shared resource model can be used to integrate and deploy multiple software communications architecture (SCA) enabled waveforms on a single reconfigurable platform. This unique approach has the potential to greatly reduce the power, size and cost of radio platforms used to operate software-defined waveforms under SCA.

The advanced technology of partial reconfiguration has the ability to greatly improve platform capabilities and to successfully address SCA interface requirements for programmable hardware. SwRI has proven that new technology advancements have enabled incorporation of field programmable gate array (FPGA) waveform programming into the design process. SwRI has presented evidence of how the overhead associated with creating and operating an SCA-enabled radio can be mitigated by programming the hardware to execute a majority of the baseband signal processing, thereby increasing overall speed and minimizing the number of resources needed.

Staff demonstrated successful intermediate frequency (IF) transmission of a satellite communication waveform using an SCA-compliant reconfigurable platform. Waveform development and integration was achieved through the design of a combination of software and firmware resources.

Beginning with a model constructed in Simulink®, firmware was generated to perform modulation of the data packets generated by software. Performance verification was accomplished by down-mixing the transmitted IF signal using a local oscillator (LO) and inputting the collected data into MATLAB® for demodulation and data analysis.

SwRI provides system engineering assistance for integration of new radios and data links on the A-10 platform, such as:

For example, SwRI provides maintainers with the capability to measure power output of the SADL radio and power supplied to the UHF antenna, test the RF transmission lines, and provide the SADL system with a controlled transmission and view of the correct symbols and messages on the MFCD/HUD (multi-function color display/head-up display). 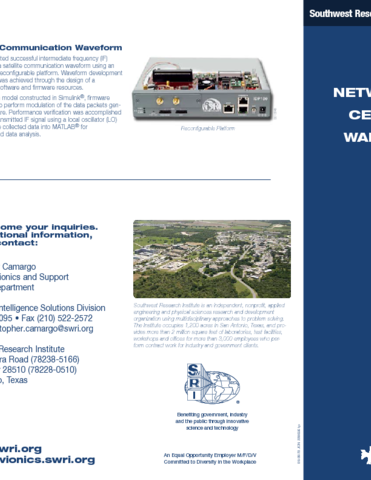