Shane Siebenaler is manager of the Fluid Dynamics Section in SwRI’s Mechanical Engineering Division. He oversees research and evaluation related to leak detection, product qualification, erosion, and flow performance mapping primarily for clients in the oil and gas industry.

In late 2015, the Paris climate meetings brought climate change back into the national media spotlight. What’s driving climate change and the actions needed to address it are complex and varied. There is no silver bullet, and activity in a number of areas is needed.

The effect of greenhouse gases on the environment is of paramount concern, and one area of emphasis is reducing methane emissions. Methane is the dominant molecule in natural gas, a significant energy source in the United States. Methane emissions are a byproduct of industrial operations, landfills, and agricultural processes. While methane is a valuable commodity, it also is a powerful greenhouse gas. On time scales of hundreds and thousands of years, carbon dioxide has a greater impact because it stays in the atmosphere longer than methane. However, in the shorter term (tens of years), methane has a far greater per-unit impact on the climate. Over a 20-year span, the global warming potential of methane is 84. This measure expresses the heat-trapping potential of a gas relative to carbon dioxide, meaning that methane traps 84 times as much heat per molecule.

Many studies indicate that dampening the rate of increase in global temperatures over the next 100 years requires substantial cuts in both methane and carbon dioxide emissions.

For the past year and a half, Southwest Research Institute (SwRI) has played a key role in the Methane Detectors Challenge (MDC), a multi-organizational collaboration aimed at curbing methane emissions in the gas-producing sector. The Environmental Defense Fund (EDF) initiated the MDC to expedite the development and commercialization of low-cost continuous detection technologies. The MDC is a collaborative, multi-stakeholder partnership to improve the speed and cut the costs associated with methane detection from natural gas facilities to reduce overall methane emissions. The program leverages a unique collaboration among an environmental advocacy group, seven oil and gas operators, and a number of independent reviewers from industry, government, and academia.

METHANE AND THE OIL AND GAS INDUSTRY

Methane is a colorless, odorless gas. So why do we smell something akin to rotten eggs? An odorant called mercaptan is added to the gas so we can detect it. Mercaptan contains sulfur, which accounts for the distinctive odor.

Another way to look at this problem is to assess what it would take to remove this amount of emitted methane. Forests naturally soak up methane from the atmosphere. How much forest would be required to remove this amount? The U.S. would need about 500 million acres of forest — equivalent to the entire combined land surface of Texas, California, Arizona, Oklahoma, Louisiana, and New Mexico.

Studies show that a small number of sites account for the majority of emissions releases. These events often result from equipment failure or operators failing to close valves or hatches on tanks. Not all methane leaks are unintentional. In the oil and gas industry, some methane is vented deliberately to remove pressure during maintenance or other operations. But emissions from undetected leaks comprise a significant portion of all emissions.

Any lost product reduces the value of the total produced gas. So, independent of the significant environmental cost of methane emissions, there is an economic incentive for companies to rapidly detect and mitigate such leaks.

Detecting a large outlet of emissions requires continuous monitoring. Traditionally, emissions detection for well pads and compressor stations is conducted through infrequent surveys with relatively expensive instrumentation. These factors highlight the need for low-cost technologies that can detect emissions around the clock and can be deployed at every well pad, compressor station, and other unmanned facility. Reducing large-scale emissions could be achieved by a two-state (leak, no leak) sensor that operates much the same as a household smoke detector. The methane detector would then prompt personnel to visit the site and investigate the possible emissions source. 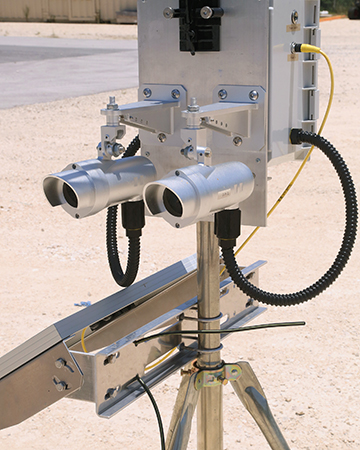 A “two-gun” laser system detects methane concentration of long distances. This sensor technology detects changes along the entire path as opposed to a stationary “point” sensor. 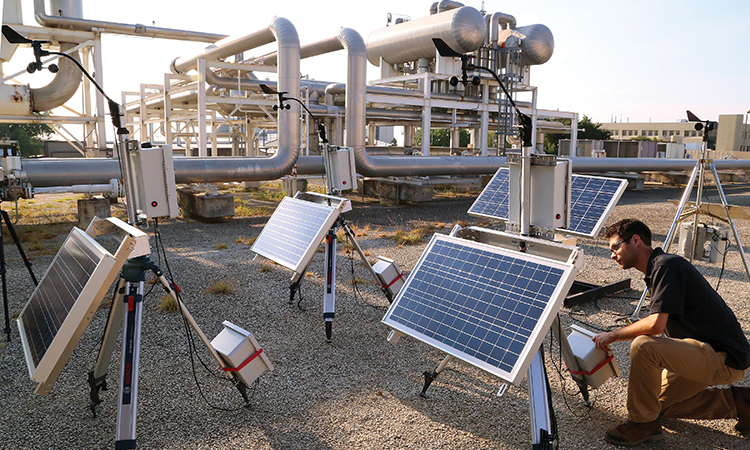 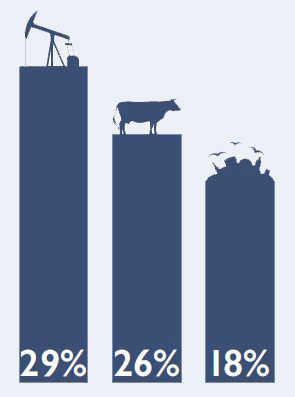 According to the U.S. Environmental Protection Agency, the three largest sources of methane are from natural gas and petroleum systems, domestic livestock, and landfills.

SwRI’s role in the MDC began in 2014 with laboratory testing of five sensor technologies selected from a pool of more than 20 applicants from industry and academia. Four of the five technologies were selected for further development and assessment in a follow-up effort at SwRI in 2015. Additional development required outfitting the core sensors with solar panels and rugged data acquisition systems in a period of just a few months.

Because of the vast number of unmanned sites, these sensors need to be relatively low cost ($1,000 per site at production scale). They also need to measure methane concentrations at orders of magnitude lower than the explosive limit of the gas, which is the target for many off-the-shelf sensors. Candidate technologies ranged from sensors used in cars to prevent inebriated drivers from starting them to laser-based monitors used to detect the buildup of harmful gases in coal mines.

SwRI designed and conducted tests to evaluate the ability of the candidate technologies to find realistic leaks. The first series of tests used a chamber designed and built by SwRI to accurately control the background concentrations of the atmosphere in the chamber to simulate very small changes in the methane concentration. Additional tests assessed whether or not elevated levels of other contaminants such as ethane and carbon dioxide affected sensor performance. Testing also included various temperature and humidity levels to quantify how extreme environmental conditions affected sensor performance. This was crucial because the sensors must withstand environments that range from the harsh winters of North Dakota to the blistering summers of south Texas.

Testing showed that some technologies could quantify methane levels in a static (i.e., not windy) environment down to one part per million, which is as accurate as sensors costing more than $50,000. SwRI conducted iterations of these tests to allow developers to improve their technologies as performance data became available.

The focus of the technology assessment was to release methane outdoors in conditions that would mirror actual well pads and compressor stations. Over a span of several months, researchers conducted tests at two outdoor SwRI facilities. During testing, the technologies had to be powered by solar panels and batteries. Two of the technologies communicated to data acquisition computers through wired connections, and two used wireless routers.

Testing involved methane releases as small as 0.5 standard-cubic-feet-per-minute at distances up to 130 feet between the leak source and the sensors. A key aspect of such leaks, both in this testing and at real locations, is that the concentration of methane is highly variable as wind moves around the gas plume. Thus, the sensors must be able to respond almost instantaneously to “peaks” of methane to accurately gauge whether or not an unplanned release is present.

Two sensors detected most (and in one case, all) leaks without generating any data that would be interpreted as a false alarm. The testing also demonstrated that the technologies could withstand harsh outdoor climates and run unattended for long periods of time.
While there are opportunities for these technologies to be further improved, this challenge demonstrated that these relatively low-cost technologies can be used as continuous monitoring devices in a “hands-off” manner.

SwRI is working with EDF to conduct field testing of two of the technologies at a handful of sites across the United States. Testing is expected to begin sometime this year.

The author would like to acknowledge the following SwRI staff members whose technical expertise was responsible for the success of this project: Research Engineer Adam Janka, Research Engineer John Edlebeck, and Principal Technician Ty Smith.