A roboticist conceptualizes, designs, builds, programs and experiments with robots.

One hundred years ago, Czech playwright Karel Čapek coined the word robot, and since then, engineers have been chasing fiction in the pursuit of robotic solutions in a variety of applications. The word robot evokes a wide range of ideas, from the fictional droids in the “Stars Wars” universe to the mechanical arms widely used in manufacturing plants and the disc-shaped autonomous vacuums sweeping our homes.

Engineers at Southwest Research Institute are ushering in a new wave of mobile robots without boundaries, closing the gap between science fiction and the real world. Today’s robot concepts are limitless and represent a range of shapes and sizes from small crawling bots to the largest automated systems in the world. Robots are ideal for performing dull, dirty, dangerous and delicate tasks or for improving process quality, repeatability and throughput. At SwRI, what drives a robot concept is the job it needs to accomplish. Today’s commercially available off-the-shelf robots can effectively meet the requirements of many applications. When no readily available robot matches a project’s demands, SwRI’s multidisciplinary team of roboticists creatively goes to work, conceptualizing ideas and translating them into reality.

Paul Evans is director of SwRI’s Manufacturing and Robotics Technologies Department, which has a broad program in developing and deploying advanced manufacturing and robotics technologies. The department founded ROS-Industrial, an open-source extension of the Robot Operating System (ROS), and hosts the South Central regional office of the Texas Manufacturing Assistance Center (TMAC). 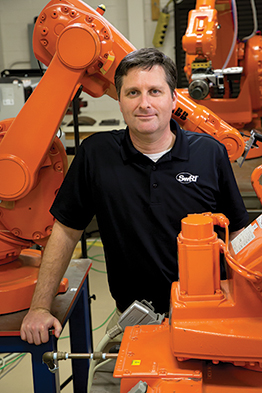 It was this exact gap, where available robot solutions did not meet the process and requirements necessary, that launched SwRI on a journey to build the largest mobile robot system in the world, to deliver one of the most powerful laser coating removal solutions to the aerospace industry. SwRI’s ability to create this ingenious giant is rooted in our successful history of working in the automated airplane depaint industry. Our staff has been creating and installing large-scale depaint systems for the military since the early 1990s, servicing fighter aircraft such as the F-15 Eagle and the F-16 Falcon.

As a nonprofit research and development organization, SwRI uses part of its net income to invest in tomorrow’s innovations, allowing staff members to explore innovative and unproven concepts without contractual restrictions and expectations. In 2020, SwRI initiated 114 new projects, investing more than $10 million in internal research.

All aircraft must undergo periodic paint stripping, inspection and repainting multiple times over the course of their service lives. Paint must be removed for weight savings and to allow engineers to inspect the aircraft structure for any signs of corrosion or damage. Without automation, the depaint process is labor-intensive and uses potentially harmful chemicals, producing large volumes of hazardous waste. Previous generations of SwRI’s automated depaint systems removed workers from harm’s way and used less hazardous plastic media to blast off coatings. However, these systems were impractical for larger airframes.

In 2009, while building a pair of robots for next-generation fighter aircraft, SwRI began to contemplate what large-scale robots of the future would look like and how they would operate. Our team envisioned a future where robots could move between hangars, instead of being fixed in place and dedicated to one facility. We envisioned a future where the depaint process was precise, fast and clean. These creative thoughts led to two key game-changing internal research programs that catapulted SwRI into the world of large-scale laser-wielding mobile robots. 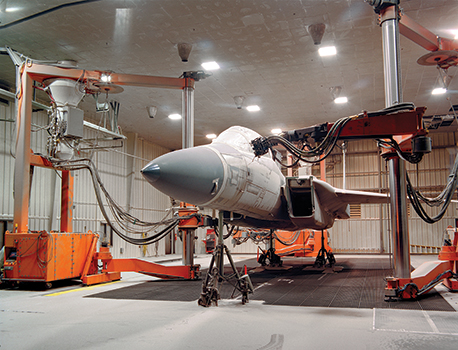 For more than 30 years, SwRI has developed large robotic systems for aerospace applications such as a robotic depaint system designed to maintain the U.S. Air Force’s fleet of F-15 fighter jets.

Using internal research, SwRI demonstrated a new high-precision laser that selectively removes the paint, topcoat and primer from aircraft. This technology can be applied to other structures such as bridges, vehicles and ships.

Lasers use a medium, such as a ruby crystal, loaded with electrons that repeatedly amplify and concentrate light until it emerges in a powerful beam. A fiber laser uses fiber-optic cables as the amplifying medium to efficiently pipe concentrated light beams wherever they are needed.

Using SwRI’s internal research and development (IR&D) program in 2010, we developed and demonstrated laser ablation to strip coatings from military planes. Once the team demonstrated selective coating removal — stripping paint layer by layer — at promising production rates, SwRI began pursuing new opportunities in robotic laser coating removal. A fiber laser process was ideal for routing the laser beam to the end of the robot arm to remove a range of coatings. To meet commercial aviation needs, engineers then investigated a range of coatings and explored using carbon dioxide lasers for some commercial aircraft paints.

At the same time, another IR&D project explored how to revolutionize robotic workspaces with its Mobile Robotic ROving Accurate Manipulator (MR ROAM). We integrated a robot arm onto a mobile base, to take the robot to the job instead of bringing the job to the robot. This successful research project led to a commercial automated warehousing application.

In addition to our internal research portfolio, another critical factor in SwRI’s ability to create the largest robots in the world is the expertise of our staff and our state-of-the-art facilities. Our multidisciplinary staff has years of experience in process development and fabrication techniques in a range of technical fields, all critical for advanced robotics development and integration. Additionally, SwRI’s unique facilities include a heavy article test building offering the cranes, high bay and advanced tools and machinery needed to build the largest and heaviest systems. Once we demonstrated the laser coating removal and mobile manipulator expertise, SwRI applied this to the development needs of a commercial client. SwRI’s task was to develop a laser coating removal robot that would remove paint from the largest aircraft in the fleet while remaining adaptable and scalable, to remove coatings from the smallest aircraft as well. In collaboration with XYREC Inc., with SwRI providing research and development services, the Laser Coating Removal (LCR) robot was born.

The LCR system precisely and efficiently removes coatings from full aircraft for maintenance operations. The LCR system is the only known solution for high-speed removal of the full range of aircraft coatings, including all colors and clear coatings, over a broad range of defense and commercial aircraft — from fighter-sized jets to cargo-sized airframes. One LCR can work independently or can team with another, providing additional flexibility and portability to optimize facility usage.

SwRI developed the largest mobile robot system that positions the most powerful carbon dioxide laser on any surface of an aircraft to quickly, cost-effectively and cleanly remove coatings.

The LCR system uses the largest commercially available carbon dioxide laser deployed via the largest mobile manipulator. It includes intelligent process monitoring and control to precisely conduct the coating removal process, which can remove a single layer or multiple layers all the way down to the substrate. The LCR system is unique. No other depaint system can remove aircraft coatings from a broad range of substrates as quickly or in such an environmentally friendly fashion.

An end effector is the device attached to a robotic arm that performs a task. The nature of the device depends on the robot application and can include grippers or tools.

Key to the LCR is coupling the laser removal process with a robotic system uniquely designed to deliver the laser beam via the robotic end effector. The system’s laser process is controlled by a proprietary closed-loop, computer-vision-based software and includes an innovative “scanner” that sweeps the laser over the surface of the aircraft. Intelligent process monitoring and control delivers the laser beam to precisely and safely remove coatings layer by layer.

The LCR’s 20-kilowatt laser combusts and evaporates all paint colors, and the resulting paint effluent is immediately vacuumed from the surface and passed through a filtration system. The system’s built-in, closed-loop, color recognition and control system accurately strips metal and composite surfaces, making selective removal possible. The laser is deployed on a 7-degrees-of-freedom robotic arm mounted on a 3-degrees-of-freedom mobile platform. “Degrees of freedom” refers to the positioning capability of the system and includes moving on the x, y and z axes as well as rotational movements such as roll, pitch and yaw. This level of manipulation requires sophisticated software to control the robot’s geometric path around the aircraft, following the three-dimensional contour of the airframe in an optimal trajectory. The autonomous mobile platform moves automatically to position the robot manipulator near the aircraft.

The system is available in four sizes. The smallest targets small aircraft such as fighter jets and helicopters, and the largest strips commercial passenger and cargo aircraft with the most passenger capacity and heaviest weight limits. The computer-controlled system is monitored by an operator from a supervisory room. The system is designed to execute the laser removal process to meet the recommendations of the SAE MA4872A standard for thermal stripping. 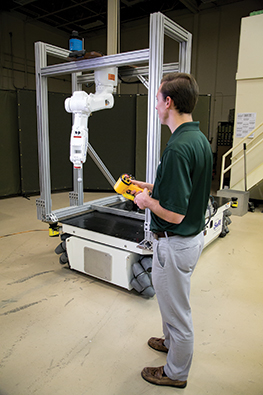 Engineers developed a small-scale mobile manipulator system to demonstrate using an off-the-shelf industrial manipulator, mobile platform and metrology system. The system was adapted for picking up and sorting items in a warehouse application. 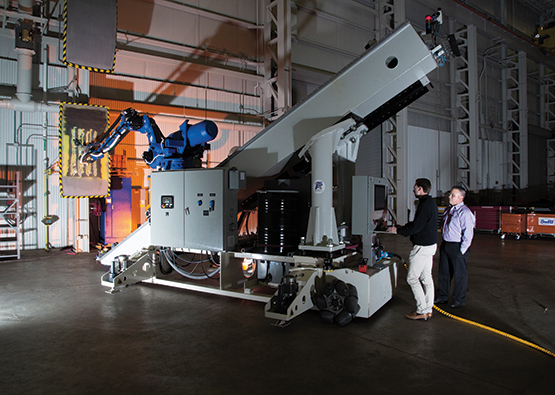 SwRI demonstrates the A5 Robotic System, a mobile platform designed for adaptability and flexibility for a range of aircraft manufacturing and maintenance activities, including surface processing. 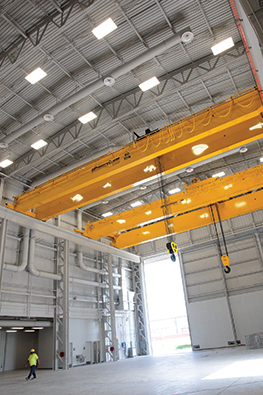 SwRI’s 20,283-square-foot Heavy Article Test facility is designed to fabricate and test large, heavy components. The building is 56 feet tall and features two bridge cranes, 100-ton and 50-ton. A 20- by 20- by 20-foot floor pit allows below-ground access to test articles and sliding hangar-style doors on either end of the building allow open access to the facility.

The LCR system may shorten processing time by up to 45%, drastically reducing cost per aircraft and minimizing support facility usage.

Over the course of the R&D effort, 115 SwRI employees played a role in LCR development. Additionally, client leadership and a host of their suppliers supported a range of equally important efforts focused on design, manufacturing and compatibility with a broad range of quality standards and industry regulations.

R&D World magazine recognized the LCR system as one of the 100 most significant innovations of 2020. The R&D 100 Awards are known as the “Oscars of Innovation.”

The innovation truly blends key technologies and processes. Independently, they are interesting; collectively they create a revolutionary game-changer in mobile robotics for lasering paint from a full range of aerospace surfaces, from components to small fighter jets to the largest commercial and cargo aircraft.

Questions about this article or Industrial Robotics & Automation? Contact Paul Evans at +1 210 522 2994.