November 7, 2019 — Southwest Research Institute successfully demonstrated a miniature solar observatory on a high-altitude balloon November 1. The SwRI Solar Instrument Pointing Platform (SSIPP) — a reusable, high-precision solar observatory about the size of a mini fridge and weighing 160 pounds — was carried by a stratospheric balloon, collecting 75 minutes of solar images in the proof-of-concept flight.

“SSIPP is a novel, low-cost observatory prototype,” said SwRI’s Dr. Craig DeForest, principal investigator of the NASA Flight Opportunities mission. “We are working to provide similar infrastructure and flexibility to a ground-based observatory, delivered to near-space.”

SSIPP collects solar data using infrared, ultraviolet or visible light instruments on an optical table, similar to those used in ground-based observatories but from a near-space environment. SSIPP is an arcsecond-class observatory, which provides optical precision equivalent to imaging a dime from a mile away. The platform supports the development of custom solar instruments. Collecting data from the edge of space — around 20 miles above the Earth’s surface — avoids image distortions caused by looking through the atmosphere.

“SSIPP could support the development of a range of new instruments for the near-space environment at relatively low cost,” DeForest said. SSIPP includes an “optical table,” a stable platform used to support optics in a laboratory environment. “Using a standard optical table platform increases flexibility, allowing scientists to develop new technologies without designing a custom observatory. For instance, scientists are interested in the cacophony produced by the roiling solar environment.”

While sound cannot travel through the vacuum of space, scientists can detect sound on the Sun by imaging the disturbances it creates in the solar atmosphere. During the demonstration flight, which imaged a special range of blue light called the “g band,” SwRI scientists Dr. Glenn Laurent and Dr. Derek Lamb demonstrated the platform’s pointing capability and will search the images for visible signatures of “high-frequency” solar sound waves, which are actually some eight octaves below the deepest audible notes. In comparison, the most studied sound waves in the Sun are five octaves deeper.

“The transfer of heat to the surface of our star is a violent and tremendously loud process,” DeForest said. “Sound waves can heat the solar atmosphere to extremely high temperatures, but it’s a poorly understood process. Existing measurements cannot account for all the energy required. The 10-second frequency range is very hard to measure from the ground, because Earth’s turbulent atmosphere confuses the signal.”

Because existing spaceborne assets are optimized for different science, the frequency range observed by SSIPP fills a gap in current measurements, highlighting the importance of new instruments to advance knowledge.

“Upon reaching the stratosphere, SSIPP immediately locked onto the solar disk using a novel two-stage pointing system,” Laurent said. “The next step for SSIPP is to partner with outside institutions to extend quick-turnaround solar flights to a range of scientific instrumentation.” 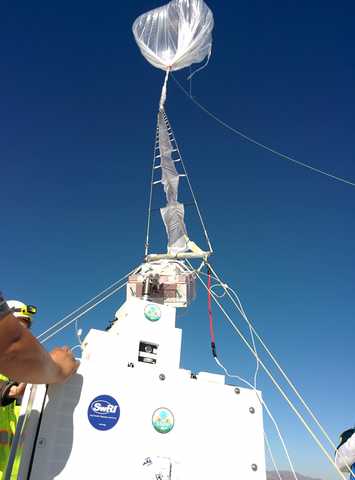