November 10, 2020 — Last week NASA snagged a sample from the surface of asteroid Bennu, an Empire State Building-sized body that Southwest Research Institute scientists have helped map with nearly unprecedented precision. Using orbital data from the OSIRIS-REx spacecraft, researchers measured centimeter- to meter-sized craters on the boulders scattered around its rugged surface to shed light on the age of the asteroid.

While the collected sample will yield enormous scientific value when it is returned to Earth in 2023, a key job for scientists during the time in orbit at Bennu was to understand the geology of the entire asteroid to provide important context for the sample. This provides insights into all the processes that might have affected the nature of the sample.

“The amazing data collected by OSIRIS-REx at asteroid Bennu have allowed us to not just find impact craters across its surface, but to actually find and study the craters on the surfaces of boulders,” said SwRI’s Dr. Kevin Walsh, a coauthor of “Bennu’s near-Earth lifetime of 1.75 million years inferred from craters on its boulders,” published October 26 in the journal Nature. “The craters that we could observe and measure on the surfaces of boulders allowed us to estimate their strengths, a first-of-its-kind measurement.”

Bennu is a dark rubble pile held together by gravity and thought to be an asteroid remnant created following a collision involving a larger main-belt object. Boulders are scattered across its heavily cratered surface, indicating that it has had a rough-and-tumble life since being liberated from its much larger parent asteroid millions or even billions of years ago. Scientists use studies of impact craters to determine the ages of planetary surfaces.

Team members from the University of Arizona developed a mathematical formula that allows researchers to calculate the maximum impact energy a boulder of a given size and strength could endure before being smashed.

Walsh, lead author Dr. Ron Ballouz (a postdoctoral fellow at the University of Arizona), and colleagues brought together an understanding of the number of craters, the strength of the materials impacted, and the numbers of impactors to help constrain the chronology of Bennu’s existence in the inner Solar System at 1.75 million years. Since the spacecraft arrived at Bennu in 2018, scientists have been characterizing the asteroid’s composition from orbit and comparing it to other asteroids and meteorites. Now NASA has collected an actual sample of its surface that scientists will be able to study.

“We held our breath as the spacecraft touched the asteroid’s boulder-strewn surface with a robotic arm for a few seconds to collect a sample of rocks and dust on October 20 — a first for NASA,” Walsh said. “Hitting pay dirt on the first attempt is fantastic. We look forward to learning so much more when the sample arrives back at Earth in 2023.”

“The rocks tell their history through the craters they accumulated over time,” said Ballouz. “The boulders serve as witnesses to Bennu’s time as a near-Earth asteroid, validating decades of dynamical studies of the lifetime of near-Earth asteroids.” 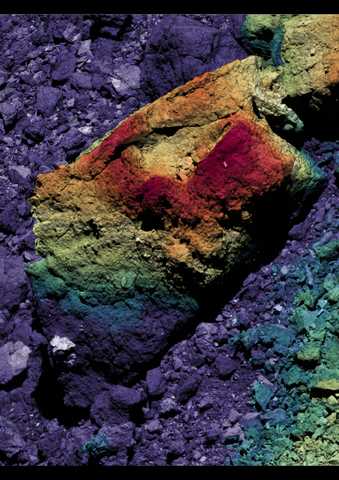