Dec. 12, 2010 — Simulations performed at Southwest Research Institute® (SwRI®) may explain how Saturn's majestic rings and icy inner moons formed following the collision of a Titan-sized satellite with the planet, according to a paper published in Nature magazine's Dec. 12 Advance Online Publication.

Saturn's rings are at present 90 to 95 percent water ice. Because dust and debris from rocky meteoroids have polluted the rings, the rings are believed to have consisted of pure ice when they formed. This composition is unusual compared to the approximately half-ice and half-rock mixture expected for materials in the outer Solar System. Similarly, the low densities of Saturn's inner moons show that they too are, as a group, unusually rich in ice.

The previous leading ring origin theory suggests the rings formed when a small satellite was disrupted by an impacting comet. "This scenario would have likely resulted in rings that were a mixture of rock and ice, rather than the ice-rich rings we see today," says the paper's author, Dr. Robin M. Canup, associate vice president of the SwRI Planetary Science Directorate in Boulder.

The new theory links the formation of the rings to the formation of Saturn's satellites. While Jupiter has four large satellites, Saturn has only one, Titan. Previous work suggests that multiple Titan-sized satellites originally formed at Saturn, but that those orbiting interior to Titan were lost as their orbits spiraled into the planet.

As the final lost satellite neared Saturn, heating caused by the flexing of its shape by the planet's gravity would cause its ice to melt and its rock to sink to its center. Canup uses numerical simulations to show that as such a satellite crosses the region of the current B ring, planetary tidal forces strip material from its outer icy layers, while its rocky core remains intact and eventually collides with the planet. This produces an initial ice ring that is much more massive than Saturn's current rings.

Over time, collisions in the ring cause it to spread radially and decrease in mass. Inwardly spreading ring material is lost, while material spreading past the ring's outer edge accumulates into icy moons with estimated masses consistent with the inner moons seen today.

"The new model proposes that the rings are primordial, formed from the same events that left Titan as Saturn's sole large satellite," says Canup. "The implication is that the rings and the Saturnian moons interior to and including Tethys share a coupled origin, and are the last remnants of a lost companion satellite to Titan." 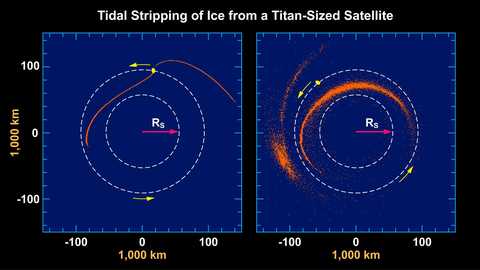