July 28, 2020 — Researchers from Southwest Research Institute (SwRI) and The University of Texas at San Antonio (UTSA) are working to develop unobtrusive diagnostics for hypersonic flight testing. The project led by Dr. Nicholas J. Mueschke of SwRI’s Mechanical Engineering Division and Dr. Christopher Combs of UTSA’s College of Engineering is supported by a $125,000 grant from the Connecting through Research Partnerships (CONNECT) program.

“The goal is to ultimately make full aerodynamic measurements in a truly representative hypersonic environment,” Mueschke said. “These measurements will directly contribute to the design of next-generation hypersonic vehicles.”

Hypersonic speed is defined as faster than five times the speed of sound or greater than Mach 5. When something is flying that fast, the air moving around a flying object will chemically decompose. Some points behind the shockwave created by the vehicle are hotter than the surface of the sun. This strange chemical environment causes whatever is traveling through it to heat up, and even melt and chemically react with the air.

“When we launch an object at hypersonic speeds, the air around it begins to break down,” Mueschke said. “The molecules in the air, like nitrogen and oxygen, break apart and sometimes form new compounds. The puzzle pieces start rearranging themselves.”

By pointing a laser at just the right wavelength at the air flow around a hypersonic vehicle, certain molecules absorb the light briefly and then emit it in different colors, a process known as laser-induced fluorescence.

“That process helps us understand other things,” Mueschke said. “For example, the molecules take a little while to expel all of that light, and during that time, they move a little. If we take image after image of this glowing field of light, we can determine how fast the molecules are moving.”

“We need to find a way to make very detailed measurements of what exactly is going on without getting in the way,” Mueschke said. “For the scale of the objects we’re flying, all the most relevant action is happening within a millimeter of the surface of the object as it’s in motion. Everything we’re looking for is happening in that space.”

From there, Mueschke and Combs hope to measure the environment’s pressure, temperature and density, eventually leading to a truly representative picture of the hypersonic flight environment, which is extremely difficult to measure.

“When we talk hypersonic flight, this generally refers to speeds faster than five times the speed of sound, which is roughly 4,000 mph,” Combs said. “At this speed it would take less than an hour to fly from New York to Los Angeles, and you could get from San Antonio to just about anywhere in the continental US in less than 30 minutes. There’s potential to truly revolutionize how we get from place to place. Add in the fact that all spacecraft return to Earth at hypersonic speeds, along with the obvious defense applications, and you can see why hypersonics is a particularly hot topic right now.”

Mueschke and Combs will make their initial measurements at Combs’s laboratory at UTSA, which will soon include a Mach 7 Ludwieg Tube, a facility that can mimic some conditions of hypersonic flight. In later stages, the project will move to SwRI’s two-stage light gas gun system, which more closely simulates the hypersonic flight environment. 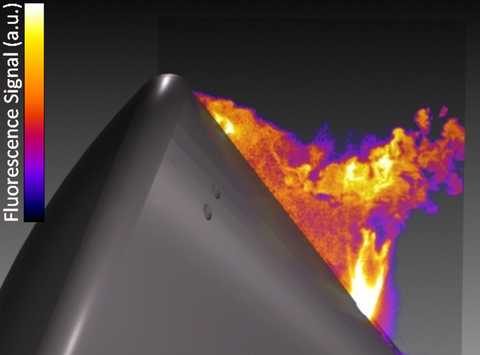