December 20, 2021 — A constellation of Southwest Research Institute-built and -operated satellites recently celebrated five years in orbit, circling the tropics to assess wind speeds to better understand how hurricanes intensify. Originally designed for a two-year mission, the Cyclone Global Navigation Satellite System (CYGNSS) was developed to study how GPS signals bouncing off the ocean can help measure hurricane wind speeds and intensity. It continues making these frequent, quality measurements today and through 2023.

The relatively low-cost microsatellites — each roughly the size of a carry-on suitcase — use GPS signals reflected off the ocean surface to infer wind speeds and monitor the location, intensity, size and development of tropical cyclones. Flying in formation, the eight spacecraft cover an orbital swath that passes over most of the Earth’s hurricane-producing zone, up to 35 degrees north and south of the Equator, and track entire life cycles of tropical storms.

CYGNSS samples storms between one and three times a day, monitoring their development and capturing sudden changes like rapid intensification that could greatly improve forecasting. Scientists at the National Oceanic and Atmospheric Administration recently compared the errors in the operational forecast of 2018’s Hurricane Michael as it rapidly intensified into a Category 5 hurricane with and without CYGNSS data included in the models. The CYGNSS data reduced peak errors by as much as 45%.

“CYGNSS’ round-the-clock surface wind speed measurements are helping improve intensity forecasting of tropical cyclones,” said Randy Rose, a technical lead for SwRI’s smallsat program. “But the satellites operate 24-7, 365 days a year; however, they monitor tropical storms less than one percent of the time.”

The science team is discovering new uses for the “bonus” data collected the rest of the time. For instance, data products generated over oceans include near-surface wind speed and, from it, sea-to-air fluxes of latent and sensible heat.

Scientists have also discovered that when CYGNSS is operating across dry land, the data maps can help them understand near-surface soil moisture and capture sudden changes like flooding. Mapping the extent of wetlands in heavily vegetated regions is also improving the prediction of methane emissions from these marshy areas. Scientists are using this new methane data in global wetland emission models, important when evaluating this greenhouse gas.

NASA recently added an evolution of the resilient smallsat platform to its Rapid Spacecraft Development Office (RSDO) IV catalog. Rapid IV contracts serve as a fast and flexible means for the government to acquire spacecraft and related components, equipment and services in support of NASA missions and other federal agencies. The spacecraft designs, related items and services may be tailored, as needed, to meet the unique needs of each mission.

SwRI led the engineering development and manages the operation of the constellation. The University of Michigan Climate and Space Sciences and Engineering Department leads the science investigation, contributed to the engineering development, and manages science operations. The Earth Science Division of NASA’s Science Mission Directorate oversees the mission. SwRI’s office in Boulder, Colorado, hosts the mission operations center, which commands the spacecraft, collects the telemetry and transmits the data to the science operations center at the University of Michigan. 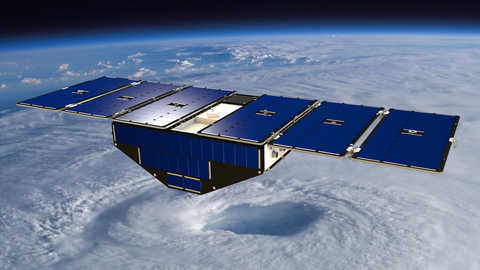