The award is presented annually to a mission that has demonstrated a significant improvement in the capability of small satellites. Over 1,200 small satellite enthusiasts voted for this year’s 10 small satellite nominees, which were selected by the experts on the AIAA SmallSat technical committee.

“It is very rewarding that we were selected by such a large number of peers and colleagues in the smallsat community,” said SwRI’s Randy Rose, who accepted the award on behalf of the CYGNSS team and Principal Investigator Dr. Christopher Ruf. “I think we’ll be seeing a paradigm shift toward more small satellite science constellations like CYGNSS in the future.”

CYGNSS makes frequent measurements of ocean surface winds to monitor the location, intensity, size, and development of tropical cyclones, particularly how they intensify. In recent decades, forecasters have greatly improved models that predict the path of hurricanes, but the ability to predict a storm’s rapidly changing intensity has lagged. CYGNSS will provide the data necessary to enable significant improvement of this key piece of the puzzle.

“NASA recently selected SwRI to further develop the concept for another small satellite mission based on the CYGNSS platform to study the Sun’s outer corona,” said SwRI’s John Scherrer, who led satellite development , fabrication, and testing. The “Polarimeter to Unify the Corona and Heliosphere” (PUNCH) concept proposes a constellation of four suitcase-sized satellites in Earth orbit to study how the Sun’s atmosphere, or corona, connects with the interplanetary medium and excites the solar wind.

The AIAA Small Satellite Mission of the Year Award is presented annually to the mission that has demonstrated a significant improvement in the capability of small satellites. Eligible missions will have launched, established communication, and have acquired results from on-orbit since January 1, 2016 and have a wet mass of less than 150 kg. Several factors satisfy the “demonstrate significant improvement” requirement, such as innovations in spacecraft structural design, scientific instrument development, communications capability, attitude determination and control capability, inter-satellite coordination, constellation or cluster management, onboard computing, and others. 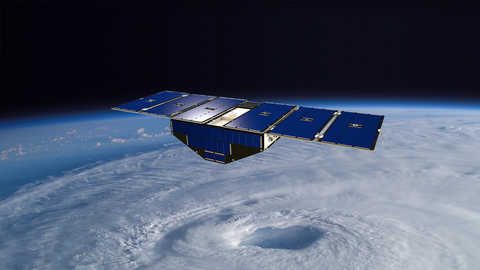