San Antonio – March 14, 2016 – Rapid melting of ice and Arctic permafrost is altering tundra regions in Alaska, Canada and Russia, according to a new study released in the journal Nature Geoscience. Ice-wedge degradation has been observed before in individual locations, but this is the first study to determine that rapid melting has become widespread throughout the Arctic.

If this trend continues, it will lead to widespread draining and differential subsidence of the landscape, having long-term effects on plants and wildlife across the Arctic.

“It’s really the tipping point for the hydrology,” said Anna Liljedahl, the lead researcher and an assistant professor at the University of Alaska Fairbanks (UAF) Water and Environmental Research Center.

The Arctic tundra has a unique landscape consisting of many interconnected polygon shapes roughly 15 to 30 meters wide. These polygons are shaped by large frozen ice wedges located meters into permafrost. Ice wedges gradually formed over hundreds or even thousands of years as water seeped into permafrost cracks. The micro-topographic features affect drainage, snow distribution and the general wetness or dryness of a landscape.

For his analysis, Necsoiu compared historical aerial photos and satellite images from 1948 to 1990 with recent images taken from 2005 and 2012. Combined with field observations, the team’s analyses showed that deep troughs formed in the landscape as the tops of ice wedges melted. Field researchers also observed a decline in native plants such as lichen and moss. In early images, where ice wedges were not degraded, snow melt gathered in small shallow -ponds during summer months. In recent years, however, the ponds did not form in those areas as deep troughs from advanced ice degradation created channels for the water to run off.

Study sites across the Arctic showed ice-wedge degradation occurred in less than a decade. In some cases, a single unusually warm summer was enough to cause more than 10 centimeters of surface subsidence, which causes pooling and runoff in an otherwise relatively flat landscape.

Although these regions contain “cold permafrost,” with an overall average temperature of about 7 degrees Fahrenheit, surface thawing still occurred at all of the 10 study sites.

Gradual warming of permafrost has been well-documented in the Arctic, but the polygon study indicates that even a brief period of unusual warmth can cause a rapid shift in a short time period. Researchers said this is a new trend for the Arctic, at least for the last 60 years covered in the study. 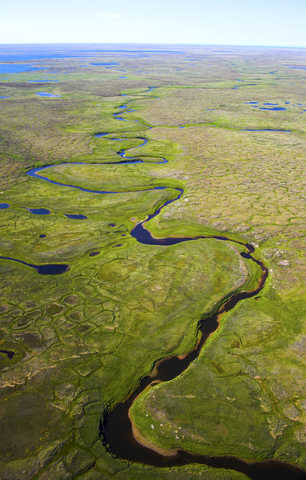