September 10, 2019 — The U.S. Department of Defense awarded a Southwest Research Institute-led team a contract to prototype a system to process, exploit and disseminate data from satellites for tactical use by military units. SwRI is collaborating with Amazon Web Services (AWS) and SciTec Inc. to support the Space and Missile Systems Center CASINO PED ground station initiative.

The Commercially Augmented Space Inter-Network Operations (CASINO) Processing, Exploitation, and Dissemination (PED) program seeks to produce more timely combat information and actionable intelligence to the field. Over the last decade, the military has significantly increased the intelligence, surveillance and reconnaissance (ISR) data it collects. Unfortunately, this data surplus has created a bottleneck in processing and analysis. The Defense Innovation Unit (DIU) will facilitate this technology demonstration and support the tempo needed to address future tactical threats.

“This prototype will demonstrate rapid delivery of processed satellite data to the tactical units needing the information in areas of conflict,” said Debi Rose, SwRI senior program manager leading the effort. “Through this demonstration project, we will integrate a ground network supporting a constellation of satellites with unique processing capabilities and cloud access to deliver data needed to meet military objectives.”

The prototype system, which must initially be capable of collecting and processing data from up to 20 overhead satellites but have the potential to scale to hundreds, will be delivered within 14 months. SwRI will contribute expertise in satellite systems, software engineering and automated cloud solutions.

“As the systems engineering lead, we will integrate operational commercial ground data networks with SciTec’s processing capabilities and delivery through AWS cloud services,” Rose said. “The system will acquire raw data from the satellites and transport it through the commercial gateway to cloud-based services. The data will be processed en route, supporting rapid delivery of tactical products to in-theater users with minimal human-machine interface.”

Launched in 2015, DIU helps the U.S. military rapidly adopt emerging commercial technologies for national security. Staffed by civilian and both active duty and reserve military personnel, DIU is headquartered in Mountain View, California, with offices in Boston, Austin and the Pentagon. 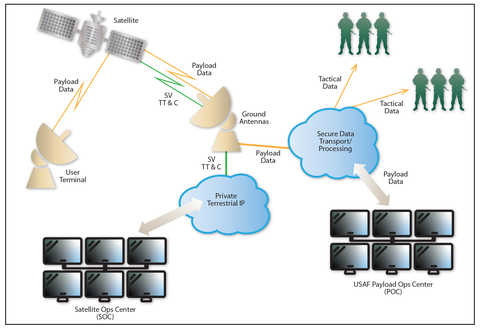