Prior to its deorbit in September of 2017, Cassini sampled the plume of ice grains and water vapor erupting from cracks on the icy surface of Enceladus, discovering molecular hydrogen, a potential food source for microbes. A new paper published in the planetary science journal Icarus explores other potential energy sources.

“The detection of molecular hydrogen (H2) in the plume indicated that there is free energy available in the ocean of Enceladus,” said lead author Christine Ray, who works part time at SwRI as she pursues a Ph.D. in physics from The University of Texas at San Antonio. “On Earth, aerobic, or oxygen-breathing, creatures consume energy in organic matter such as glucose and oxygen to create carbon dioxide and water. Anaerobic microbes can metabolize hydrogen to create methane. All life can be distilled to similar chemical reactions associated with a disequilibrium between oxidant and reductant compounds.”

This disequilibrium creates a potential energy gradient, where redox chemistry transfers electrons between chemical species, most often with one species undergoing oxidation while another species undergoes reduction. These processes are vital to many basic functions of life, including photosynthesis and respiration. For example, hydrogen is a source of chemical energy supporting anaerobic microbes that live in the Earth’s oceans near hydrothermal vents. At Earth’s ocean floor, hydrothermal vents emit hot, energy-rich, mineral-laden fluids that allow unique ecosystems teeming with unusual creatures to thrive. Previous research found growing evidence of hydrothermal vents and chemical disequilibrium on Enceladus, which hints at habitable conditions in its subsurface ocean.

“We wondered if other types of metabolic pathways could also provide sources of energy in Enceladus’ ocean,” Ray said. “Because that would require a different set of oxidants that we have not yet detected in the plume of Enceladus, we performed chemical modeling to determine if the conditions in the ocean and the rocky core could support these chemical processes.”

For example, the authors looked at how ionizing radiation from space could create the oxidants O2 and H2O2, and how abiotic geochemistry in the ocean and rocky core could contribute to chemical disequilibria that might support metabolic processes. The team considered whether these oxidants could accumulate over time if reductants are not present in appreciable amounts. They also considered how aqueous reductants or seafloor minerals could convert these oxidants into sulfates and iron oxides.

“We compared our free energy estimates to ecosystems on Earth and determined that, overall, our values for both aerobic and anaerobic metabolisms meet or exceed minimum requirements,” Ray said. “These results indicate that oxidant production and oxidation chemistry could contribute to supporting possible life and a metabolically diverse microbial community on Enceladus.”

“Now that we’ve identified potential food sources for microbes, the next question to ask is ‘what is the nature of the complex organics that are coming out of the ocean?’” said SwRI Program Director Dr. Hunter Waite, a coauthor of the new paper, referencing an online Nature paper authored by Postberg et al. in 2018. “This new paper is another step in understanding how a small moon can sustain life in ways that completely exceed our expectations!”

The paper’s findings also have great significance for the next generation of exploration.

“A future spacecraft could fly through the plume of Enceladus to test this paper’s predictions on the abundances of oxidized compounds in the ocean,” said SwRI Senior Research Scientist Dr. Christopher Glein, another coauthor. “We must be cautious, but I find it exhilarating to ponder whether there might be strange forms of life that take advantage of these sources of energy that appear to be fundamental to the workings of Enceladus.” 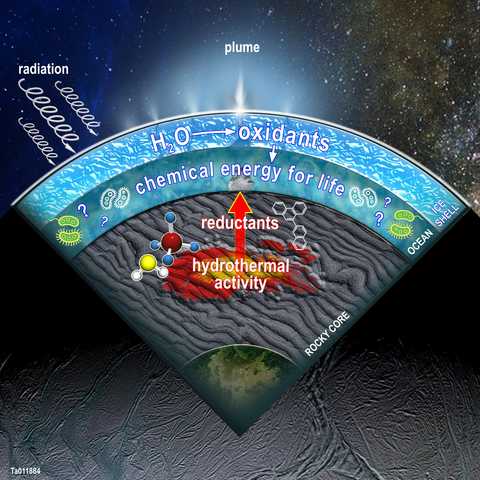