January 22, 2020 — A Southwest Research Institute team developed a new geochemical model that reveals that carbon dioxide (CO2) from within Enceladus, an ocean-harboring moon of Saturn, may be controlled by chemical reactions at its seafloor. Studying the plume of gases and frozen sea spray released through cracks in the moon’s icy surface suggests an interior more complex than previously thought.

“By understanding the composition of the plume, we can learn about what the ocean is like, how it got to be this way and whether it provides environments where life as we know it could survive,” said SwRI’s Dr. Christopher Glein, lead author of a paper in Geophysical Research Letters outlining the research. “We came up with a new technique for analyzing the plume composition to estimate the concentration of dissolved CO2 in the ocean. This enabled modeling to probe deeper interior processes.”

Analysis of mass spectrometry data from NASA’s Cassini spacecraft indicates that the abundance of CO2 is best explained by geochemical reactions between the moon’s rocky core and liquid water from its subsurface ocean. Integrating this information with previous discoveries of silica and molecular hydrogen (H2) points to a more complex, geochemically diverse core.

“Based on our findings, Enceladus appears to demonstrate a massive carbon sequestration experiment,” Glein said. “On Earth, climate scientists are exploring whether a similar process can be utilized to mitigate industrial emissions of CO2. Using two different data sets, we derived CO2 concentration ranges that are intriguingly similar to what would be expected from the dissolution and formation of certain mixtures of silicon- and carbon-bearing minerals at the seafloor.”

Another phenomenon that contributes to this complexity is the likely presence of hydrothermal vents inside Enceladus. At Earth’s ocean floor, hydrothermal vents emit hot, energy-rich, mineral-laden fluids that allow unique ecosystems teeming with unusual creatures to thrive.

“The dynamic interface of a complex core and seawater could potentially create energy sources that might support life,” said SwRI’s Dr. Hunter Waite, principal investigator of Cassini’s Ion Neutral Mass Spectrometer (INMS). “While we have not found evidence of the presence of microbial life in the ocean of Enceladus, the growing evidence for chemical disequilibrium offers a tantalizing hint that habitable conditions could exist beneath the moon’s icy crust.”

The scientific community continues reaping the benefits of Cassini’s close flyby of Enceladus on Oct. 28, 2015, prior to the end of the mission. INMS detected H2 as the spacecraft flew through the plume, and a different instrument had earlier detected tiny particles of silica, two chemicals that are considered to be markers for hydrothermal processes.

“Distinct sources of observed CO2, silica and H2 imply mineralogically and thermally diverse environments in a heterogeneous rocky core,” Glein said. “We suggest that the core is composed of a carbonated upper layer and a serpentinized interior.” Carbonates commonly occur as sedimentary rocks such as limestone on Earth, while serpentine minerals are formed from igneous seafloor rocks that are rich in magnesium and iron.

It is proposed that hydrothermal oxidation of reduced iron deep in the core creates H2, while hydrothermal activity intersecting quartz-bearing carbonated rocks produces silica-rich fluids. Such rocks also have potential to influence the CO2 chemistry of the ocean via low-temperature reactions involving silicates and carbonates at the seafloor.

“The implications for possible life enabled by a heterogeneous core structure are intriguing,” said Glein. “This model could explain how planetary differentiation and alteration processes create chemical (energy) gradients needed by subsurface life.”

INMS, built by NASA’s Goddard Space Flight Center, was operated by an international team of scientists headed by Waite. The Cassini-Huygens mission was a cooperative project of NASA, the European Space Agency and the Italian Space Agency. NASA’s Jet Propulsion Laboratory, Pasadena, California, a division of Caltech, managed the mission for NASA’s Science Mission Directorate in Washington, D.C. The Cassini orbiter was designed, developed and assembled at JPL. 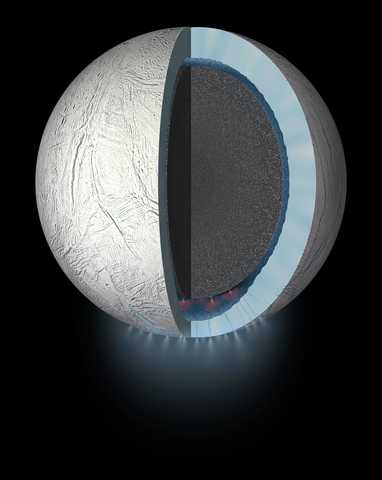