“We are, yet again, blown away by Enceladus. Previously we’d only identified the simplest organic molecules containing a few carbon atoms, but even that was very intriguing,” said SwRI’s Dr. Christopher Glein, a space scientist specializing in extraterrestrial chemical oceanography. He is coauthor of a paper in Nature outlining this discovery. “Now we’ve found organic molecules with masses above 200 atomic mass units. That’s over ten times heavier than methane. With complex organic molecules emanating from its liquid water ocean, this moon is the only body besides Earth known to simultaneously satisfy all of the basic requirements for life as we know it.”

Prior to its deorbit in September of 2017, Cassini sampled the plume of material emerging from the subsurface of Enceladus. The Cosmic Dust Analyzer (CDA) and the SwRI-led Ion and Neutral Mass Spectrometer (INMS) made measurements both within the plume and Saturn’s E-ring, which is formed by plume ice grains escaping Enceladus’ gravity.

“Even after its end, the Cassini spacecraft continues to teach us about the potential of Enceladus to advance the field of astrobiology in an ocean world,” Glein said. “This paper demonstrates the value of teamwork in planetary science. The INMS and CDA teams collaborated to reach a deeper understanding of the organic chemistry of Enceladus’ subsurface ocean than would be possible with only one data set.”

During Cassini’s close flyby of Enceladus on Oct. 28, 2015, INMS detected molecular hydrogen as the spacecraft flew through the plume. Previous flybys provided evidence for a global subsurface ocean residing above a rocky core. Molecular hydrogen in the plume is thought to form by the geochemical interaction between water and rocks in hydrothermal environments.

“Hydrogen provides a source of chemical energy supporting microbes that live in the Earth’s oceans near hydrothermal vents,” said SwRI’s Dr. Hunter Waite, INMS principal investigator who also was a coauthor of the new paper. “Once you have identified a potential food source for microbes, the next question to ask is ‘what is the nature of the complex organics in the ocean?’ This paper represents the first step in that understanding — complexity in the organic chemistry beyond our expectations!”

“The paper’s findings also have great significance for the next generation of exploration,” Glein said. “A future spacecraft could fly through the plume of Enceladus, and analyze those complex organic molecules using a high-resolution mass spectrometer to help us determine how they were made. We must be cautious, but it is exciting to ponder that this finding indicates that the biological synthesis of organic molecules on Enceladus is possible.”

The paper, “Macromolecular organic compounds from the depths of Enceladus,” was published in the June 28, 2018, issue of Nature. Lead authors are Frank Postberg and Nozair Khawaja from the University of Heidelberg, Germany. 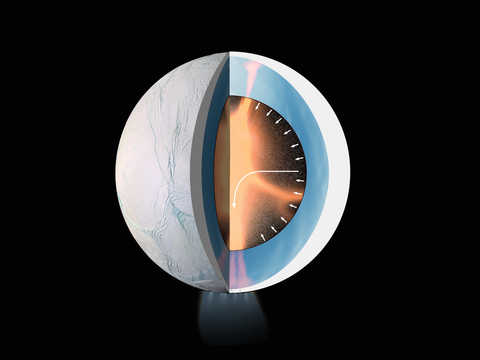