September 28, 2021 — Dr. John Spencer, an Institute scientist at Southwest Research Institute, has been named a Fellow of the American Geophysical Union (AGU).

Spencer is a planetary scientist working and publishing in several areas of planetary science. He specializes in the study of moons and other small bodies of the outer solar system, particularly Jupiter’s volcanic moon Io and other Galilean satellites as well as Saturn’s active ice moon Enceladus, using theoretical models, Earth-based telescopes, the Hubble Space Telescope and spacecraft observations.

Since 1962, AGU has elected fewer than 0.1 percent of its members per year to join its fellowship ranks. The prestigious designation recognizes union members who have made “exceptional contributions to Earth and space science through a breakthrough, discovery, or innovation in their field.” Only 59 of 60,000 members were named fellows this year, an honor which will be conferred December 15 at the 2021 AGU Fall Meeting in New Orleans.

In the course of his career, Spencer is or has been a member of the science teams on five NASA missions: the Galileo Jupiter orbiter, the Cassini Saturn orbiter, the New Horizons Pluto/Kuiper Belt mission, the Europa Clipper mission and the Lucy Trojan asteroids mission. On the New Horizons mission, Spencer led the successful search for a second flyby target beyond Pluto, the Kuiper Belt object Arrokoth, and led the science planning for the Arrokoth flyby.

Spencer is the author or co-author of more than 210 peer-reviewed publications. Spencer was lead author of a highly cited paper regarding the discovery of a southern polar hotspot on Saturn’s moon Enceladus. His numerous scientific discoveries include finding oxygen on the surfaces of three moons of Jupiter — Europa, Ganymede and Callisto — as well as identifying sulfur gas and large asymmetries in the atmosphere of a fourth, Io.

Spencer’s theoretical work has improved our collective understanding of nitrogen frost on Pluto and Triton, water frost on Jupiter’s moons, heat radiation from asteroids and provided a likely explanation for the 300-year-old mystery of the unusual black-and-white appearance of Saturn’s moon Iapetus.

Founded in 1919, AGU is an international, nonprofit scientific association supporting 60,000 members in 137 countries. Its mission is to support and inspire a global community of individuals and organizations interested in advancing discovery in Earth and space science and its benefit for humanity and the environment.

In 2016, Spencer was the recipient of the AGU Planetary Sciences Section’s distinguished Whipple Award, which annually recognizes individuals who have made outstanding contributions in the field of planetary science. 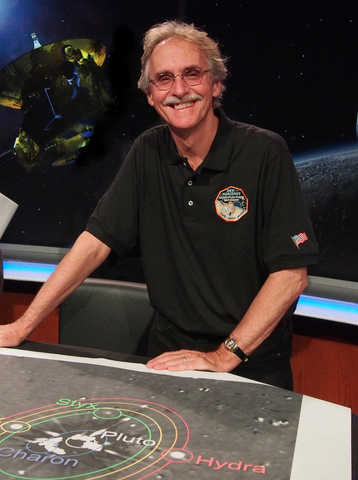