Boulder, Colo. — Oct. 15, 2015 — The New Horizons team described a wide range of findings about the Pluto system in its first research paper, published today. “The Pluto System: Initial Results from its Exploration by New Horizons” appears in and on the cover of the Oct. 16 issue of the journal Science; the publication comes just three months after NASA’s historic first exploration of the Pluto system in mid-July. The authors include more than 150 New Horizons project and NASA personnel; Principal Investigator Alan Stern of Southwest Research Institute (SwRI) is first author.

From the variety in Pluto’s geological landforms, to Pluto’s atmosphere, to its intriguing moons, New Horizons has revealed a degree of diversity and complexity on Pluto and its moons that few expected in the frigid outer reaches of the solar system.

“The New Horizons mission completes our initial reconnaissance of the solar system, giving humanity our first look at this fascinating world and its system of moons,” said Jim Green, director of planetary science at NASA Headquarters in Washington. “New Horizons is not only writing the textbook on the Pluto system, it’s serving to inspire current and future generations to keep exploring — to keep searching for what’s beyond the next hill.”

NASA’s New Horizons spacecraft reached a distance of 8,507 miles (13,691 kilometers) from Pluto’s surface during its July 14 closest approach, gathering a treasure trove of data that will take almost another year to return to Earth. The data returned so far show a surprisingly wide variety of landforms and terrain ages on Pluto, as well as variations in color, composition, and albedo (surface reflectivity). Team members also discovered evidence for a water-ice rich crust and multiple haze layers in Pluto’s atmosphere, and found that Pluto is both larger and more ice rich than expected prior to the flyby.

“The Pluto system surprised us in many ways, most notably teaching us that small planets can remain active billions of years after their formation,” said Stern. “We were also taught important lessons by the unexpected degree of geological complexity that both Pluto and its large moon Charon display.”

Observations of Pluto’s moons show Charon has extensive resurfacing, extensional tectonics, and a puzzling dark terrain at its North Pole. Evidence also points to variations in the composition of its crust. Although no new satellites were detected, New Horizons provided the first resolved images of Pluto’s smaller moons Nix and Hydra, finding Nix is approximately 34 miles (54 kilometers) long and Hydra is 27 miles (43 kilometers) long. Puzzlingly, their surface reflectivities are significantly higher than Charon’s.

The spacecraft’s science payload collected more than 50 gigabits of data from the Pluto system leading up to and at closest approach. Data were gathered by the suite of science instruments aboard New Horizons, including the Ralph infrared spectrometer/imager, the Long-Range Reconnaissance Imager (LORRI), the Alice ultraviolet spectrograph, twin REX radio science experiments, the Solar Wind Around Pluto (SWAP) detector, the PEPSSI charged-particle spectrometer, and a student-built and operated dust detector. 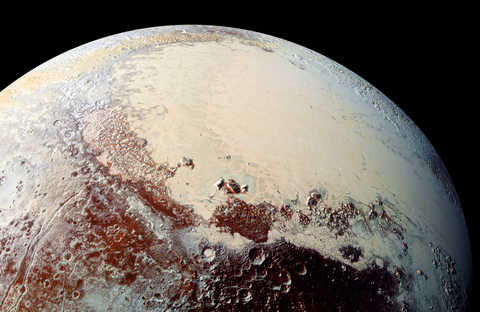 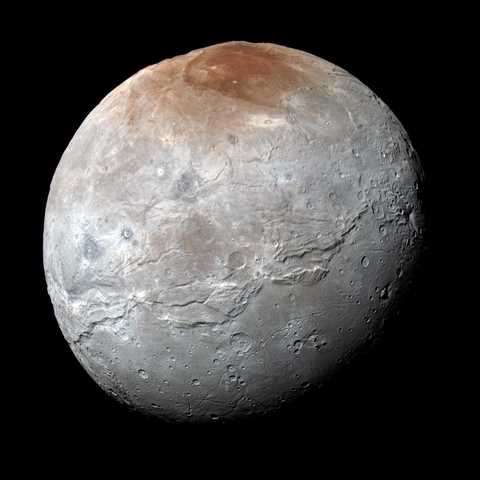