August 28, 2020 — NASA has approved the final development stage of the Southwest Research Institute-led Lucy mission to explore the Trojan asteroids in preparation for its October 2021 launch.

The space agency’s approval follows independent reviews of the spacecraft, instruments, schedule and budget. This milestone, known as Key Decision Point-D (KDP-D), represents the official transition from final design and fabrication (Phase C) to systems delivery, testing, assembly and integration (Phase D). During this part of the mission’s life cycle the design and fabrication of the spacecraft is completed, and the instruments are integrated into the spacecraft and tested. The spacecraft will then be shipped next summer to NASA’s Kennedy Space Center in Florida for integration with the launch vehicle.

“Each phase of the mission is more exciting than the last,” said Lucy Principal Investigator Dr. Hal Levison of SwRI. “While, of course, Lucy still has several years and a few billion miles to go before we reach our real goal — exploring the never-before-seen Trojan asteroids — seeing this spacecraft come together is just incredible.”

“We’ve had to revise the ATLO schedule to give components affected by COVID-19 restrictions a bit more time before they will be integrated onto the spacecraft,” says Lucy Payload Deputy Project Manager John Andrews, of SwRI. “Through a lot of hard work and ingenuity, the Lucy team was able to start ATLO as planned on August 10, and we are on schedule to ship the spacecraft to Kennedy Space Center as planned next July.”

The oxidizer tank has been integrated with the spacecraft, and the instruments will be delivered to Lockheed Martin starting in October. All spacecraft assembly and testing will occur at the Colorado facility in preparation for the launch window opening on October 16, 2021.

After launch, Lucy will still have a long path ahead flying out to the distance of Jupiter to make close fly-bys past a record-breaking number of asteroids. The spacecraft will encounter the first of its eight targets, a main belt asteroid, in 2025. Lucy will reach the first of seven Trojan asteroids in 2027 and fly past the final binary pair in 2033.

Lucy’s next major milestone is the Mission Operation Review scheduled for October 2020, which assesses the project’s operational readiness and its progress towards launch. At that time, the mission will demonstrate that its navigation, planning, command and science operations requirements are complete. 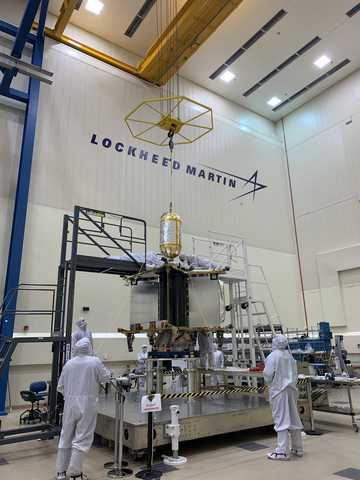