January 9, 2020 — Less than two years before launch, scientists associated with NASA’s Lucy mission, led by Southwest Research Institute, have discovered an additional small asteroid that will be visited by the Lucy spacecraft. Set to launch in 2021, its 12-year journey of almost 4 billion miles will explore the Trojan asteroids, a population of ancient small bodies that share an orbit with Jupiter.

This first-ever mission to the Trojans was already going to break records by visiting seven asteroids during a single mission. Now, using data from the Hubble Space Telescope (HST), the Lucy team discovered that the first Trojan target, Eurybates, has a satellite. This discovery provides an additional object for Lucy to study.

“If I had to bet that one of our destinations had a satellite, it would have been this one,” said SwRI’s Hal Levison, principal investigator of the mission. “Eurybates is considered the largest remnant of a giant collision that occurred billions of years ago. Simulations show that asteroid collisions like the one that made Eurybates and its family often produce small satellites.”

This correlates with big Kuiper Belt objects thought to be cousins to the Trojans, which show evidence of both massive collisions and small satellites.

“At the Lucy science team meeting last November, my colleague Keith Noll pointed out a suspicious-looking spot next to an image of Eurybates. I quickly downloaded the next set of data and realized that the spot was still there, but it had moved, just like a satellite would,” said Caltech’s Mike Brown, a Lucy science team member.

“We asked for more HST time to confirm the existence of the satellite, and we were given three tries,” said Noll, Goddard Spaceflight Center’s project scientist for the mission. “In the first two observations, we didn’t see anything, so we began to think we might be unlucky. But on the third orbit, there it was!”

The small object was difficult to spot, in part, because Eurybates is 6,000 times brighter than its satellite. This implies that it’s less than 1 km (0.5 miles) across, which, if correct, would make it among the smallest objects ever visited by a spacecraft.

“Before we believed that it was actually real, we had to make sure that a single satellite could actually fit all of the data,” said SwRI’s Cathy Olkin, deputy principal investigator of the Lucy mission. “Using computer simulations, we demonstrated many possible satellite orbits that match both the observations where we can see the satellite, as well as the times when we don’t.”

While the current data are enough to confirm the existence of the satellite, the Lucy team will collect more HST data later this year to better understand the object’s orbit.

To see a video about the Lucy mission, visit: https://youtu.be/4ZHCwSaBzd8. 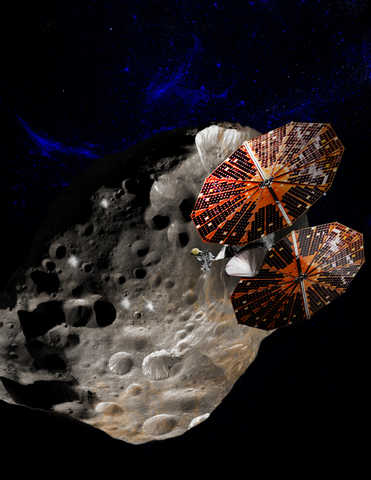