San Antonio — August 12, 2015 — At the request of scientists at Southwest Research Institute (SwRI), the International Astronomical Union has named a crater near the south pole of the Moon for the late Dr. David C. Slater, a planetary scientist at SwRI who helped develop a spacecraft instrument for studying the lunar poles.

Such shadowed polar regions, also found on other planets, asteroids, and comets, are of special interest to scientists because they are never warmed by the Sun and may contain water ice and other volatiles.

Slater, who was born Aug. 12, 1957 and died in 2011, would have turned 58 today. He designed and built the Lyman-Alpha Mapping Project (LAMP), an ultraviolet spectrograph, for NASA’s Lunar Reconnaissance Orbiter (LRO). Lyman-alpha light is a type of faint ultraviolet emission that bathes objects in space in a soft glow of ultraviolet light. LAMP uses the reflection of that light to image the permanently shadowed regions at the bottom of craters on the Moon near its north and south poles. Similar ultraviolet instruments Slater played a major role in developing are currently onboard ESA’s Rosetta and NASA’s New Horizons and Juno spacecraft across the solar system. Slater was also heavily involved in instruments that SwRI built for sounding rocket and shuttle experiments.

Dr. Randy Gladstone, an Institute Scientist in SwRI’s Space Science and Engineering Division, nominated Slater’s name for a 25-kilometer (15.5-mile) diameter crater near the Moon’s south pole that contains a moderately sized permanently shaded region at its base. Within the shadowed portion is a bright region around a smaller, 1-kilometer diameter crater.

Gladstone said, “The smaller crater is likely to be extremely young and therefore of special scientific interest.” A study of this and another similar crater using data from LRO-LAMP is the subject of an upcoming scientific paper by Dr. Kathy Mandt, Senior Research Scientist in SwRI’s Space Science and Engineering Division.

The International Astronomical Union (IAU) Working Group for Planetary System Nomenclature approved the name “Slater” for the feature on May 4, and it has been adopted by the United States Geological Society (USGS) Astrogeology Science Center. The upcoming paper originally referred to the 25-km crater as “unnamed” but thanks to the recent IAU approval can now identify it as Slater Crater. Gladstone said, “Now, the Slater crater will be forever linked to Dave; we are very proud to have our former colleague honored in this unique way.”

Dr. Alan Stern, associate vice president of the Space Science and Engineering Division, said, “Dave Slater made huge contributions to exploring the solar system, so it’s fitting that his name is being memorialized this way.”

The Gazetteer of Planetary Nomenclature is maintained by the Planetary Geomatics Group of the USGS Astrogeology Science Center. This work is supported by NASA’s Office of Space Science, and the site is developed in cooperation with the International Astronomical Union. 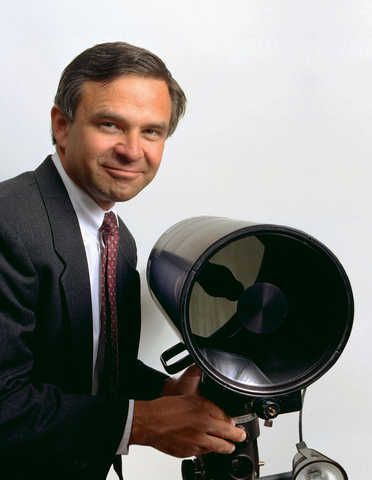