June 18, 2009 — Southwest Research Institute® (SwRI®) has received confirmation from NASA Headquarters that the Magnetospheric Multiscale (MMS) misson has been approved to begin its implementation phase. MMS will perform a definitive investigation of one of the most basic and important physical processes in the universe — magnetic reconnection. The mission is scheduled to launch in August 2014.

Magnetic reconnection is a fundamental process that taps the energy stored in a magnetic field and converts it into heat and charged-particle kinetic energy. It produces many intense phenomena from solar flares to auroras to high-energy cosmic rays to X-ray emissions from the accretion disks that surround the central regions of active galaxies to sawtooth oscillations in fusion plasmas. Closer to home, it is the ultimate driver of "space weather," which impacts technologies such as communications, navigation, power grids, and astronaut health and safety.

"Solving magnetic reconnection has the potential to unlock understanding of a fundamental energy process present throughout the universe that affects and limits our use of technologies on Earth," says NASA MMS Program Scientist Dr. Barbara Giles.

The implementation phase of MMS will begin with designing, building, and integrating subsystems and instrumentation into four identical observatories. The observatories will then be tested, launched, deployed and verified on-orbit. After launch and the four-month commissioning period, the mission will enter a two-year operations and data analysis phase followed by an additional year of data analysis.

The MMS mission is managed by NASA's Goddard Space Flight Center in Greenbelt, Md. GSFC also will build and integrate the MMS spacecraft bus, integrate the spacecraft bus with the instruments into observatories, support launch vehicle integration and launch operations managed by NASA's Kennedy Space Center, and perform mission operations. Unique to the MMS mission is the careful navigation of the four observatories to place them in a pyramid configuration of very small size (or separation) in regions such as the boundary between the Earth's magnetosphere and the solar wind where reconnection is known to occur.

"We see MMS as the culmination of many years of investigation into magnetic reconnection involving spacecraft and laboratory measurements as well as theoretical analysis and large-scale computer models," says Dr. James L. Burch, principal investigator for the MMS science investigation and vice president of the SwRI Space Science and Engineering Division. "These previous efforts show clearly that special capabilities including spacecraft separations as close as 10 kilometers, rapid measurements of the properties of charged particles at speeds up to 100 times faster than previously performed, and high resolution three-dimensional measurements of electric and magnetic fields from spacecraft with controlled surface electric potential are required to unlock the secrets of how magnetic reconnection operates in space." 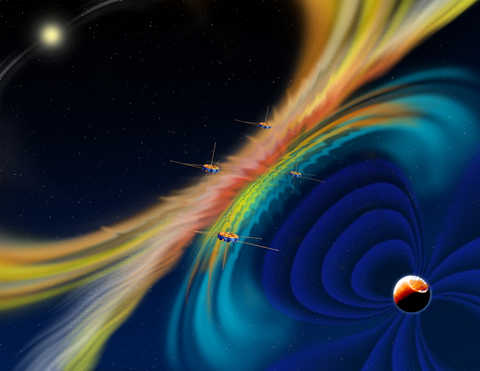