The space Lyman-alpha ultraviolet background was first detected in the 1960s, and its existence was later confirmed in 1971. This ultraviolet glow permeates space and can be used to characterize the tenuous wind of hydrogen atoms which blows through our solar system. It has also been used by SwRI instruments on NASA spacecraft to image permanently dark craters near the north and south poles of the Moon.

In most of our solar system, the background is dominated by Lyman-alpha photons emitted by the sun and scattered by interstellar hydrogen atoms that are passing through. In the outer solar system, however, where the New Horizons spacecraft travels, the scattered sunlight component of the Lyman-alpha signal is far less bright and the fainter components from the nearby regions of the Milky Way become easier to distinguish.

“The galactic Lyman-alpha background comes from hot regions around massive stars which ionize all the matter near them, which is primarily hydrogen, as that is the most abundant element in the universe,” said Dr. Randy Gladstone, the study’s lead author. “When the electrons and protons eventually get back together, or recombine, they nearly always emit Lyman-alpha photons.”

Hydrogen atoms between the stars scatter these photons into a roughly uniform glow throughout space. They are detectable, Gladstone said, but only at the Lyman-alpha wavelength, which is at a wavelength about four times shorter than can be seen by human eyes.

“The Lyman-alpha background has been studied a lot near the Earth’s orbit, and is bright enough that if we could see it, the night sky would never get darker than twilight,” Gladstone explained. “It’s so bright from solar Lyman-alpha that we weren’t certain how much the Milky Way galaxy contributed to its overall brightness. It’s like standing near a streetlamp on a foggy night. The fog scatters the lamp’s light, making it hard to see anything else.”

With the SwRI-led Alice UV imaging spectrograph aboard New Horizons, Gladstone was able to accurately measure the brightness of the galactic component of the Lyman-alpha background for the first time.

“New Horizons has been flying away from the Sun for more than 15 years now,” Gladstone explained. “The farther we moved away from the Sun, the less we were blinded by the solar component of the Lyman-alpha background.”

“This has been something that’s been guessed at by astronomers for decades,” Gladstone said. “Now we have a much more precise number.”

Gladstone hopes that this discovery will help astronomers better understand the nearby regions of the Milky Way galaxy.

“The unique position of New Horizons in the far away Kuiper Belt allows it to make discoveries like this that no other spacecraft can,” said New Horizons principal investigator and SwRI space division associate vice president Dr. Alan Stern. “What a great resource New Horizons is, not just for the exploration of the Kuiper Belt, but also to understand more about our galaxy and even the universe beyond our galaxy through this and other observations by our scientific instrument payload.” 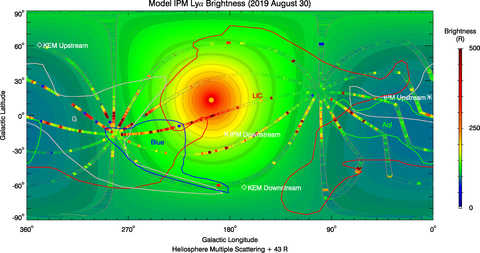