November 25, 2019 — The team that captivated the world with its exploration of Pluto and the Kuiper Belt received the Sir Arthur Clarke Award for International Space Achievement at the recent British Interplanetary Society Reinventing Space Conference 2019 Gala Dinner in Belfast, Northern Ireland. The New Horizons mission team and its Principal Investigator Alan Stern were jointly selected for outstanding achievements in space over the past many years.

“On New Year’s Day, less than four years after the first exploration of the Pluto system, the New Horizons team made history again by making the first exploration of an ancient Kuiper Belt object, a billion miles farther still,” said Stern, from the Southwest Research Institute in Boulder, Colo. “We are incredibly grateful to the Arthur C. Clarke Foundation for recognizing our work with an award named after the legendary space visionary.”

NASA’s New Horizons mission, which made headlines worldwide when the spacecraft explored the Pluto system in July 2015, broke its own distance record when it explored Kuiper Belt object 2014 MU69 at more than one billion miles beyond Pluto. The object, now officially named Arrokoth after approval by the International Astronomical Union, had previously been known by its temporary nickname, Ultima Thule. Arrokoth is the Powhatan people’s word for “sky” in the Algonquian language.

During both its flybys, the New Horizons onboard instruments collected historic images and other science measurements, revolutionizing humankind’s knowledge of Pluto and its moons, as well as the more distant primordial objects found deeper in space. The spacecraft continues its trek and is expected to have enough power to possibly explore a third object farther into the Kuiper Belt in future years.

Findings from both flybys were made possible by the mission’s talented mission team, which includes science, engineering, mission operations, navigation, public engagement, and other personnel.

The award also acknowledges Stern’s career accomplishments. Although perhaps best known as the leader of the New Horizons mission, he has led a wide array of research projects and instrumentation flying on over two dozen sounding rockets, spacecraft, and shuttle missions. He shares this work broadly, having published hundreds of papers and given hundreds of talks and lectures over the course of his career. He is also a long-time advocate of suborbital, orbital and planetary space commercialization, and a member of the National Science Board.

Stern accepted the award on behalf of himself and the New Horizons team, which consists of members from SwRI, the Johns Hopkins University Applied Physics Laboratory, the University of Colorado, Lowell Observatory, NASA, Washington University in St. Louis, the KinetX Corporation, and a host of other organizations.

“The Sir Arthur Clarke Awards, better known as ‘The Arthurs,’ have been given annually since 2005 in recognition of contributions to space exploration. Though they were originally intended to recognize and reward U.K. teams and individuals for outstanding space achievements, the organizers and Sir Arthur himself, felt that space is very much an international activity and so introduced the International Award,” said Alistair Scott, U.K. Board Member of the Arthur C. Clarke Foundation and Past President of the British Interplanetary Society. “We are pleased that Alan Stern and the New Horizons team were nominated by a member of the general public and selected for the award by the Arthur C. Clarke Foundation. It is well deserved.” 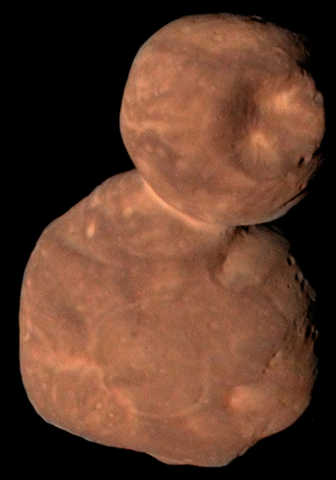