June 29, 2020 — Southwest Research Institute scientists have increased the speed and accuracy of a laboratory-scale instrument for determining the age of planetary specimens onsite. The team is progressively miniaturizing the Chemistry, Organics and Dating Experiment (CODEX) instrument to reach a size suitable for spaceflight and lander missions.

“In situ aging is an important scientific goal identified by the National Research Council’s Decadal Survey for Mars and the Moon as well as the Lunar and Mars Exploration Program Analysis Groups, entities responsible for providing the science input needed to plan and prioritize exploration activities,” said SwRI Staff Scientist Dr. F. Scott Anderson who is leading CODEX development. “Doing this onsite rather than trying to return samples back to Earth for evaluation can resolve major dilemmas in planetary science, offers tremendous cost savings and enhances the opportunities for eventual sample return.”

CODEX will be a little larger than a microwave and include seven lasers and a mass spectrometer. In situ measurements will address fundamental questions of solar system history, such as when Mars was potentially habitable. CODEX has a precision of ±20-80 million years, significantly more accurate than dating methods currently in use on Mars, which have a precision of ±350 million years.

“CODEX uses an ablation laser to vaporize a series of tiny bits off of rock samples, such as those on the surface of the Moon or Mars,” said Anderson, who is the lead author of a CODEX paper published in 2020. “We recognize some elements directly from that vapor plume, so we know what a rock is made of. Then the other CODEX lasers selectively pick out and quantify the abundance of trace amounts of radioactive rubidium (Rb) and strontium (Sr). An isotope of Rb decays into Sr over known amounts of time, so by measuring both Rb and Sr, we can determine how much time has passed since the rock formed.”

While radioactivity is a standard technique for dating samples on Earth, few other places in the solar system have been dated this way. Instead, scientists have largely constrained the chronology of the inner solar system by counting impact craters on planetary surfaces.

"The idea behind crater dating is simple; the more craters, the older the surface,” says Dr. Jonathan Levine, a physicist at Colgate University, who is part of the SwRI-led team. “It’s a little like saying that a person gets wetter the longer they have been standing out in the rain. It’s undoubtedly true. But as with the falling rain, we don’t really know the rate at which meteorites have fallen from the sky. That’s why radioisotope dating is so important. Radioactive decay is a clock that ticks at a known rate. These techniques accurately determine the ages of rocks and minerals, allowing scientists to date events such as crystallization, metamorphism and impacts.”

The latest iteration of CODEX is five times more sensitive than its previous incarnation. This precision was largely accomplished by modifying the sample’s distance from the instrument to improve the data quality. The instrument also includes an ultrafast pulsed laser and improved signal-to-noise ratios to better constrain the timing of events in solar system history.

“We are miniaturizing the CODEX components for field use on a lander mission to the Moon or Mars,” Anderson said. “Developing compact lasers with pulse energies comparable with what we currently require is a considerable challenge, though five out of the seven have been successfully miniaturized. These lasers have a repetition rate of 10 kHz, which will allow the instrument to acquire data 500 times faster than the current engineering design.”

Targeting several future missions, SwRI is developing two versions of the instrument, CODEX, which is designed for Mars and can measure organics, and CDEX, which is designed for the Moon, and does not need to measure organics. NASA’s Planetary Instrument Concepts for the Advancement of Solar System Observations (PICASSO) and the Maturation of Instruments for Solar System Exploration (MatISSE) programs are funding the instrument development, with previous support for CODEX/CDEX from the Planetary Instrument Definition and Development Program (PIDDP).

The paper titled “Dating a Martian Meteorite with 20 Ma Precision Using a Prototype In-Situ Dating Instrument” was published in Planetary and Space Science on June 15, 2020 at https://www.sciencedirect.com/science/article/pii/S0032063319305082?via%3Dihub. 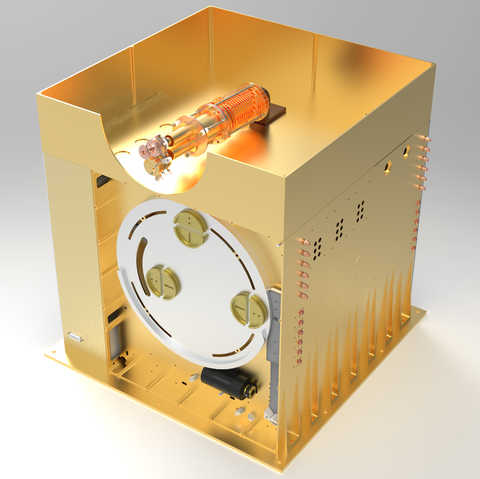