Worldwide, malaria causes more than 400,000 deaths and 200 million visits for medical treatment annually, according to the World Health Organization. While artemisinin-based combination therapies (ACT) are greater than 90 percent effective at treating the disease, the cost of treatment exerts a heavy financial burden in the regions that experience the vast majority of malaria cases.

Malaria remains an important priority to the foundation, which has committed nearly $2 billion in grants to combat malaria. This grant focuses on novel approaches for manufacturing artemisinin treatment.

“Malaria is a huge problem affecting people worldwide,” said Dr. Shawn Blumberg, a research scientist in SwRI’s Chemistry and Chemical Engineering Division. “Malaria remains one of the oldest known diseases to plague humans. We will be working to develop a new chemistry technique to develop artemisinin treatment.”

Currently, artemisinin is extracted from the sweet wormwood plant, which takes around eight-months to mature and yields about 15 grams of artemisinin for every kilogram of plant. Previous efforts to lower the cost of artemisinin involved the use of bioengineered yeast to produce artemisinic acid (AA), a synthetic precursor of the drug. This process, however, has yet to replace sweet wormwood as the primary source of the drug. SwRI will develop a novel process to utilize the more abundant Amorpha-4, 11-diene (AMD) as a cost-effective starting material to make high-quality, semisynthetic artemisinin.

“Based on our chemical expertise, we think this concept will deliver a viable, lower-cost artemisinin to inexpensively address one of humanity’s most deadly infectious diseases,” Blumberg said. “I’m excited to have this opportunity to address this issue.”

SwRI is collaborating with Dr. Doug Frantz, who holds the Max and Minnie Tomerlin Voelcker Distinguished Professorship in Chemistry at The University of Texas at San Antonio, on this new technology. The grant was awarded in April 2018 and will run through April 2019. 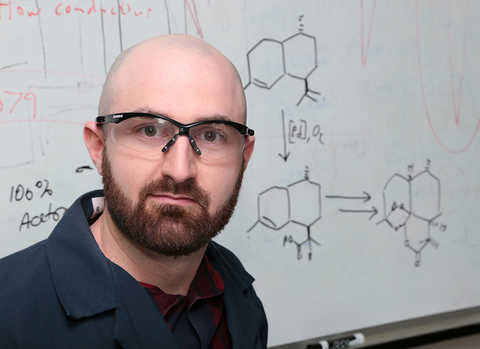