“We’re a bit surprised at both just how very unreflective the comet’s surface is, and what little evidence of exposed water-ice it shows,” says Dr. Alan Stern, Alice principal investigator and an associate vice president of the Southwest Research Institute (SwRI) Space Science and Engineering Division.

Developed by SwRI, Alice is probing the origin, composition and workings of the comet, gaining sensitive, high-resolution compositional insights that cannot be obtained by either ground-based or Earth-orbital observations. The ultraviolet wavelengths Alice observes contain unique information about the composition of the comet’s atmosphere and the properties of its surface.

“As the mission progresses, we will continue to search for surface ice patches and ultraviolet color and composition variations across the surface of the comet,” says Dr. Lori Feaga, Alice co-investigator at the University of Maryland.

Alice is one of three instruments funded by NASA flying aboard Rosetta. Alice has more than 1,000 times the data-gathering capability of instruments flown a generation ago, yet it weighs less than 4 kilograms and draws just 4 watts of power. A sister Alice instrument was developed by SwRI and was launched aboard the New Horizons spacecraft to Pluto in January 2006 to study that distant world’s atmosphere. It will reach Pluto in July 2015. SwRI also built and operates Rosetta’s Ion and Electron Spectrograph (IES), another instrument with miniaturized electronic systems. With a mass of 1.04 kilograms, IES achieves sensitivity comparable to instruments weighing five times more.

To reach its comet target, the Rosetta spacecraft executed four gravity assists (three from Earth, one from Mars) and a nearly three-year period of deep space hibernation, waking up in January 2014 in time to prepare for its rendezvous with Churyumov-Gerasimenko. Rosetta also carries a lander, Philae, that will drop to the comet’s surface in November 2014, attempting the first-ever direct observations of a comet surface.

Rosetta is an ESA mission with contributions from its member states and NASA. Rosetta’s Philae lander is provided by a consortium led by DLR, MPS, CNES and ASI. Airbus Defense and Space built the Rosetta spacecraft. NASA’s Jet Propulsion Laboratory (JPL) manages the U.S. contribution of the Rosetta mission for NASA’s Science Mission Directorate in Washington, under a contract with the California Institute of Technology (Caltech). JPL also built the Microwave Instrument for the Rosetta Orbiter and hosts its principal investigator, Dr. Samuel Gulkis. SwRI (San Antonio and Boulder, Colo.) developed the Rosetta orbiter’s Ion and Electron Sensor and Alice instrument and hosts their principal investigators, Dr. James Burch (IES) and Dr. Alan Stern (Alice). 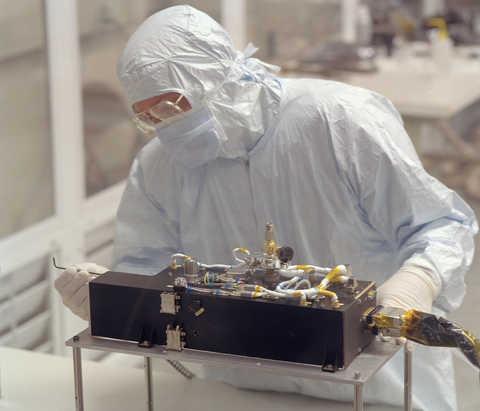