December 10, 2018 — Andrés Muñoz-Jaramillo of Southwest Research Institute and José Manuel Vaquero of University of Extremadura have developed a new technique for looking at historic solar data to distinguish trustworthy observations from those that should be used with care. This work is critical to understanding the Sun’s past and future as well as whether solar activity plays a role in climate change.

“Scientists have been monitoring solar activity since Galileo made the first drawings in 1612 by counting sunspots and groups of sunspots,” said SwRI’s Muñoz-Jaramillo, a senior research scientist who is first author of a paper in Nature Astronomy outlining the research. “However, putting all observations in perspective is quite challenging due to wide-ranging observation techniques and telescope magnifications used. We see much more now and our understanding of what we see changes the way we count spots.”

The team created a technique that takes all historic data gathered and digitized thus far and combines them visually, to provide a complete picture of the data we have and where are we missing information. Roughly every 11 years, the magnetic structure and activity of the Sun cycle between periods known as solar minimum and solar maximum. During solar maximum, the Sun emits high levels of solar radiation, ejects large amounts solar material and displays large numbers of intense sunspots, flares and other phenomena. During solar minimum, this activity is muted. Changes on the Sun cause effects in space, in the atmosphere and on Earth’s surface.

The Sun also experiences century-long variations, including periods of abnormally low solar activity called grand minima. Maunder Minimum refers to a 70-year period between 1645 and 1715 when observations revealed thousands of days without sunspots. The term was the title of a 1976 paper that first identified these longer cycles, named for a husband-wife team of solar astronomers from the late 17th century. In contrast, modern observations typically record hundreds of days without sunspots over similar periods of time.

“Scientists are investigating whether Maunder Minimum could serve as archetype of a grand minimum in magnetic activity for the Sun and other stars,” Muñoz said. However, data prior to, during and after the Maunder Minimum, is less reliable and lacks the precision and coverage of today’s measurements. Recent reevaluations of sunspot observations have yielded a conflicted view on the evolution of solar activity over the last 400 years.

“Due to our lack coverage we don’t know if the Sun took decades to recover from the Maunder Minimum to the levels of solar activity we see today, or if it was quick as if a switch had been turned on,” Munoz said. “There is currently a team of experts from all over the world working hard to find the best way of combining these data. In the meantime, one has to be very careful when using historic sunspot data to study potential links between the Sun and changes in terrestrial climate, given that these effects would be complex and subtle. Our work uses historical data to provide context to users of these estimates that may not be aware of their limitations.”

“Visualization of the challenges and limitations of the long-term sunspot number record” was published Dec. 10 in Nature Astronomy. This work is part of an international effort to reconstruct solar activity levels during the last 400 years, led by the SILSO World Data Center and funded by the NASA Grand Challenge and Living with a Star programs, and other Spanish institutions. 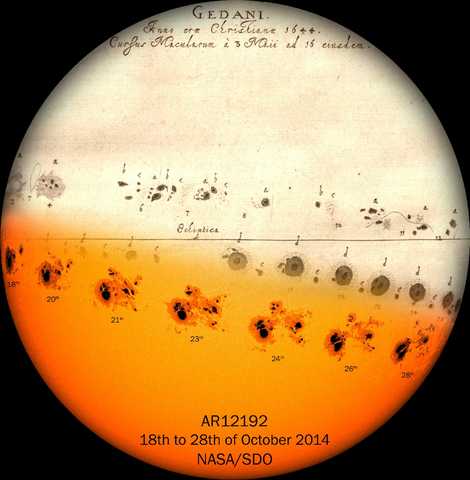