October 16, 2018 — The European Space Agency’s BepiColombo spacecraft will launch towards Mercury carrying a unique payload designed and built at Southwest Research Institute: an instrument called Strofio, which will study Mercury’s tenuous exosphere. Part of the SERENA suite of instruments, Strofio’s measurements will help us better understand the planet’s surface and the history of the smallest rocky planet orbiting close to the Sun.

“An exosphere is different from an atmosphere,” said Dr. Stefano Livi, an Institute Scientist who leads the Strofio experiment, funded by NASA’s Discovery Mission of Opportunity program. “Mercury doesn’t have enough gravity to hold onto a proper atmosphere. Instead, it is surrounded by a thin, collision-free particle environment. Particles escape from Mercury’s surface and briefly populate this exosphere before they return to the surface or drift away into interplanetary space.”

Mercury’s proximity to the Sun makes it difficult to observe from Earth. It is also challenging for spacecraft to reach and to survive in the harsh environment. The BepiColombo mission includes two spacecraft — ESA’s Mercury Planetary Orbiter and the Japan Aerospace Exploration Agency’s (JAXA) Mercury Magnetospheric Orbiter (MMO) — that will study Mercury and help us learn about the formation of our solar system. From aboard MMO, Strofio will study how Mercury’s exosphere and magnetosphere interact with each other and the planet’s surface.

To understand these interactions, Strofio must identify the particles escaping from Mercury’s surface. Because the exosphere is so thin, sampling particles is particularly challenging — in fact, the amount of particles is so sparse that the environment can’t be easily mimicked in a typical vacuum chamber. Scientists had to tackle this problem while developing and evaluating the super-sensitive Strofio instrument. Facilities at the University of Bern in Switzerland could create the necessary parameters and, over a course of a few months, allowed SwRI to analyze and demonstrate how the experiment will work in the Mercury environment.

“Strofio is novel in its ability to detect the rare, static particle population in Mercury’s exosphere,” Livi said. “We had to rethink and retool typical spectrometer designs.”

Every particle captured is analyzed in a rotating field. When and where each particle gets to the detector determines the mass and composition. Strofio uses detection algorithm tools to enhance the instrument’s sensitivity and improve identification. The instrument also had to meet strict mass and configuration limits associated with the spacecraft. The basketball-sized instrument weighs just over 7 pounds.

“Strofio is like one of my children off on its way to Mercury,” Livi said. “It’s exciting. I’m looking forward to 2025 when we’ll ‘see’ the chemical particles coming off the planet. In addition to answering many questions, I’m also expecting some surprises.”

BepiColombo is the first time ESA and JAXA have joined forces on a major space science mission. NASA frequently collaborates on ESA missions, including the Rosetta mission to Comet 67P and the JUpiter ICy moons Explorer (JUICE) mission, set to launch in 2022. 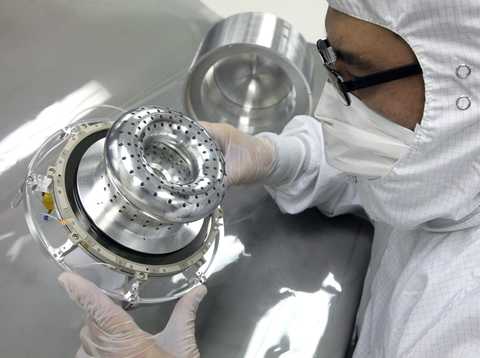