October 6, 2021 — A new study by a recent graduate of Southwest Research Institute’s joint graduate program in physics with The University of Texas at San Antonio demonstrates the ability of the Lyman-Alpha Mapping Project (LAMP) to determine the composition of areas on the lunar surface by measuring the reflectance of far-ultraviolet (far-UV) light.

LAMP is an SwRI-created, far-UV spectrograph instrument aboard NASA’s Lunar Reconnaissance Orbiter (LRO), a robotic mission launched in 2009 to study the surface of the Moon and investigate possible future landing sites. The LAMP instrument’s primary purpose is to find water ice in deep polar craters using ultraviolet light generated by stars as well as the hydrogen atoms that are thinly spread throughout the solar system.

LAMP is also able to measure the maturity, or age, of the surface, based on the degree of space weathering that the lunar surface has undergone with time. Less mature locations, such as fresh impact craters, have been found to be more reflective in the visible and in certain regions of the far-UV spectrum.

“We’re using the optical maturity parameter to normalize these younger, less mature features in our maps of the lunar surface,” said the study’s lead author, Dr. Benjamin Byron, a post-doctoral researcher at NASA’s Jet Propulsion Laboratory who conducted the research during the SwRI-UTSA graduate program. “This method had previously been used for other regions of the spectrum, but we’ve shown for the first time that it can be used for the far UV as well.”

Previous instruments have characterized this surface maturity at visible wavelengths using an index called the optical maturity parameter. Byron utilized this knowledge to similarly remove maturity-related features from far-UV maps of the lunar surface so that only data about the surface’s composition remained.

“What we see in our far-UV maps is a close correlation with composition maps from other regions of the electromagnetic spectrum,” Byron said. “We’re seeing these composition-related trends stand out in our maps more clearly than they had before, which allows us to have a global view of composition in the far-UV. It just goes to show that  far-UV instruments such as LAMP are useful in performing compositional mapping for the Moon and for other bodies as well.”

While far-UV spectrographs have been used to study the atmosphere and exosphere of other planetary bodies before, LAMP is the first to measure the composition of the lunar surface using surface-reflected light in these wavelengths.

“I think this work shows how important it is to include instruments like these on future missions,” Byron said.

He believes the next step is to use this method to study the composition of specific lunar features more deeply and plans to pursue that work with SwRI staff and current members of the SwRI-UTSA graduate program.

Byron’s study, “Lunar Surface Composition Constraints from Maturity-corrected Far-ultraviolet Reflectance Maps,” will appear in the October issue of The Planetary Science Journal. The SwRI-UTSA graduate program where Byron began this research prepares graduate students for a career in space physics and gives them hands-on research experience in space instrumentation. UTSA is one of the largest schools in the University of Texas system and has been ranked one of the top 100 universities in the world under 50 years old by the Times Higher Education. 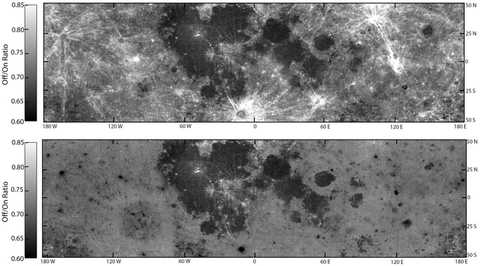