Boulder, Colo. – July 25, 2017 – A team led by Southwest Research Institute will use airborne telescopes aboard NASA research aircraft to study the solar corona and Mercury’s surface during this summer’s total solar eclipse. The August 21 observations will provide the clearest images to date of the Sun’s outer atmosphere and attempt the first-ever “thermal images” of surface temperature variations on Mercury.

Total solar eclipses are unique opportunities for scientists to study the hot atmosphere above the Sun’s visible surface. The faint light from the corona is usually overpowered by intense emissions from the Sun itself. During a total eclipse, however, the Moon blocks the glare from the bright solar disk and darkens the sky, allowing the weaker coronal emissions to be observed.

“By looking for high-speed motion in the solar corona, we hope to understand what makes it so hot. It’s millions of degrees Celsius, hundreds of times hotter than the visible surface below,” said Dr. Amir Caspi, principal investigator of the project and a senior research scientist in SwRI’s Boulder, Colorado, office. “In addition, the corona is one of the major sources of electromagnetic storms here at Earth. These phenomena damage satellites, cause power grid blackouts, and disrupt communication and GPS signals, so it’s important to better understand them.”

Why is the Sun’s outer atmosphere so much hotter than its surface? Perhaps the Sun’s magnetic field carries energy into the corona and converts it into heat. Or perhaps nanoflares or nanojets — explosions or eruptions too small and numerous to see individually — are constantly releasing small amounts of energy that combine to heat the entire corona. The team will use high-speed, high-definition video of the corona to look for fast, coherent motions that could help solve this puzzle. The project may also shed light on another question: why the magnetic structures in the corona are relatively smooth and stable.

“The magnetic field forms well organized loops and arcades in the lower corona, as well as large, fan-shaped structures extending out to many solar radii,” said Dr. Craig DeForest, a co-investigator also from SwRI’s Boulder office. “These structures are constantly being churned and tangled by the motion of the solar surface itself. So why does the corona always appear well organized, like a recently-coiffed head of hair, and not snarled or matted?”

From two of NASA’s WB-57 research aircraft, the team will observe the corona during the eclipse using stabilized telescopes with sensitive, high-speed, visible-light and infrared cameras at 50,000 feet. This high altitude provides distinct advantages over ground-based observations.

“Being above the weather guarantees perfect observing conditions, while being above more than 90 percent of Earth’s atmosphere gives us much better image quality than on the ground,” said another SwRI co-investigator, Dr. Constantine Tsang. “This mobile platform also allows us to chase the eclipse shadow, giving us over 7 minutes of totality between the two planes, compared to just 2 minutes and 40 seconds for a stationary observer on the ground.”

These are the first astronomical observations for the WB-57s. Southern Research, which is located in Birmingham, Alabama, built the Airborne Imaging and Recording Systems onboard and is working with the scientific team to upgrade its DyNAMITE telescopes on both planes with solar filters and improved data recorders.

“This airborne platform also provides us with higher-quality, higher-speed images than are achievable from current or previous space-borne instruments,” said Caspi. “It highlights the potential of the WB-57 platform for future astronomical observations.”

Eclipse observations also give the team a unique opportunity to study Mercury, the planet closest to the Sun. Mercury is difficult to observe because it is usually washed out by the bright daytime sky, or distorted by the atmosphere near the horizon at twilight.

“We plan to measure Mercury in the infrared, in near darkness, and through very little atmosphere,” Tsang said. Scientists hope to use infrared measurements to calculate surface temperatures over the planet’s entire night side. “How the temperature changes across the surface gives us information about the thermophysical properties of Mercury’s soil, down to depths of about a few centimeters, something that has never been measured before.”

The SwRI-led team includes scientists from the University of Colorado, the National Center for Atmospheric Research High Altitude Observatory, and the Smithsonian Astrophysical Observatory, as well as international colleagues at Trinity College Dublin in Ireland and the Royal Observatory of Belgium. The team will make its data available to the public after the event. The team’s work will also be featured in two documentaries to air on eclipse day and in the fall of 2017. 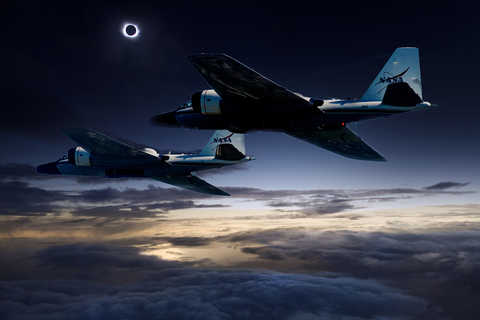