Oct. 4, 2018 — Using some of the Cassini spacecraft’s final measurements, Southwest Research Institute scientists have discovered that complex organics rain down from Saturn’s rings into its upper atmosphere. Cassini’s final orbits allowed instruments to sample particles in the ring environment, discovering that the inflow of water and other material is much heavier than expected.

“For its final adventure, Cassini dove into the unknown region between Saturn’s rings and its atmosphere,” said SwRI’s Dr. Kelly Miller, who coauthored the paper “Chemical interactions between Saturn’s atmosphere and its rings” published Oct. 4 in the journal Science. “Based on previous work, scientists expected water was raining from the rings into Saturn’s atmosphere, so the spacecraft used its radio antenna as an umbrella to protect it from debris.”

After almost 20 years in space and 13 years in the Saturn system, the Cassini spacecraft was running out of fuel. NASA decided to use its last orbits to skim the upper atmosphere and skirt the edge of the inner rings before taking its final destructive dive into the planet’s atmosphere in September 2017. Those final 22 orbits allowed instruments to measure the composition of Saturn’s upper atmosphere and its chemical interactions with material originating in the rings.

“Turns out, ring rain is more like a ring downpour,” said SwRI’s Dr. Hunter Waite, the paper’s lead author and principal investigator of Cassini’s Ion and Neutral Mass Spectrometer (INMS). “While INMS was designed to investigate gases, we were able to measure the ring particles because they hit the spacecraft at such high velocities they vaporized. Water ice, along with the newly discovered organic compounds, is falling out of the rings way faster than anyone thought — as much as 10,000 kilograms of material per second.”

“Molecular hydrogen was, as expected, the most abundant atmospheric constituent,” Miller said. “But the downpour coming from the rings included plenty of water as well as molecules like butane and propane — the kind of chemicals you might use for a grill or camping stove.”

The high speed of the Cassini spacecraft relative to Saturn’s atmosphere allowed INMS to measure the ring particles, but it also complicated the interpretation of the data. Molecules and particles would likely shatter upon impact with the detector so the various organic compounds detected by INMS are likely fragments. The observations also show evidence for variations from one spacecraft orbit to the next in the relative abundances of infalling material, suggesting that regions in Saturn’s innermost D ring are materially variable, either over time or by locality.

“While INMS was one of the last instruments collecting data to the mission’s end, getting these results was not easy,” said SwRI’s Rebecca Perryman, INMS operations lead and the paper’s second author. The team spent months processing, examining and reexamining the data.

“It was worth it. The large mass of infalling material has implications for ring evolution, hinting that material from the C ring repeatedly replenishes the neighboring D ring,” Waite said. “This infalling material likely affects the atmospheric chemistry and the carbon content of Saturn’s ionosphere and atmosphere.” 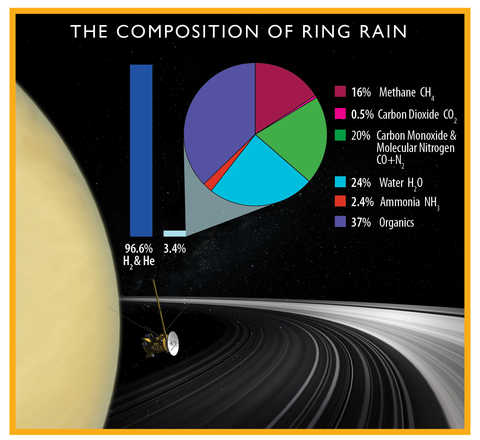 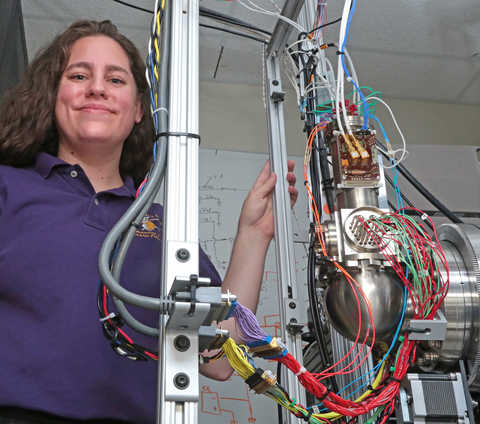